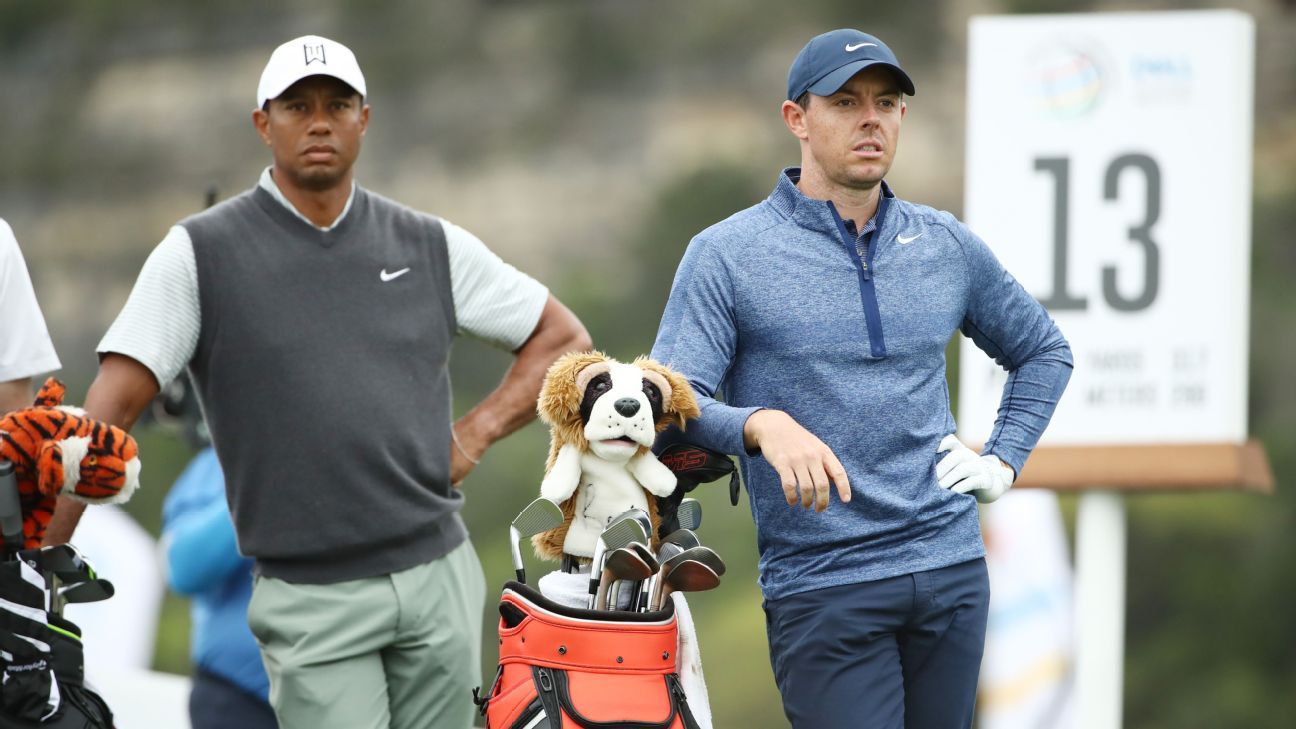 AUSTIN, Texas – The match was equal parts glory and gory, stupendously long drives mixed with zaniness, the end coming on the 17th green where Tiger Woods narrowly cleared a hazard – and then holed the winning par putt.

Rory McIlroy was left to sulk off in defeat Saturday at the WGC-Dell Technologies Match Play, a rare low moment for him this year after a strong run of success that included a victory two weeks ago at the Players Championship.

Woods prevailed 2 and 1 at Austin Country Club to advance to the afternoon quarterfinals against Denmark’s Lucas Bjerregaard.

“It was a tough match for both of us,” Woods said. “I knew it was going to be a ball-striking match. We were both playing well coming into this match, and the year that Rory has had, he doesn’t do anything poorly.

Woods had no trouble keeping up with McIlroy off the tee in the early going, and built a 2-up lead with birdies at the fifth and sixth holes, then was gifted the 10th-hole when McIlroy missed a 3-footer.

But McIlory turned things around with his own birdies at the 12th and 13th holes, then appeared in prime position to tie the match at the par-5 16th.

With Woods having to play out sideways from a fairway bunker, and then hitting his third on the green to 25 feet, McIlroy was in the fairway after bombing his tee shot 395 yards.

He had just 173 yards left, perhaps as little as a 9-iron, but flared it to the right and found himself with an awkward stance, the ball just outside a bunker, his feet in it.

He was only about 100 feet from the hole, but McIlroy pitched long, over the green, and with spectators scurrying out of the way, the ball came to rest against a wooden bulkhead. After considering a drop, McIlroy took an unplayable lie, had to return to the original spot, found the front bunker and then blasted out – before conceding. Woods never even hit a putt.

From a possibly tied match, Woods led 2-up with two holes to play.

“Well, 16 was tough,” Woods said. “The wind is blowing as hard as it is, his ball got knocked down. And my ball on 17 was supposed to be downwind, came back into my face. That’s just the way it is with these hills, the way the fronts came through. It was a difficult day for both of us.”

Woods ended the match after McIlroy nearly holed a long birdie putt at the 17th.

McIlroy had lost just three holes in going 3-0 coming into the match. Woods, who went 2-1 in pool play, needed to beat Patrick Cantlay on Friday and have Aaron Wise defeat Brandt Snedeker to advance.

Woods has not make it this far in the tournament since 2008, the last of his three victories.

McIlroy, who had finished in the top six in each of his six events this year including his win at the Players, will be credited with a tie for ninth in his final start prior to the Masters. He declined to comment afterward.