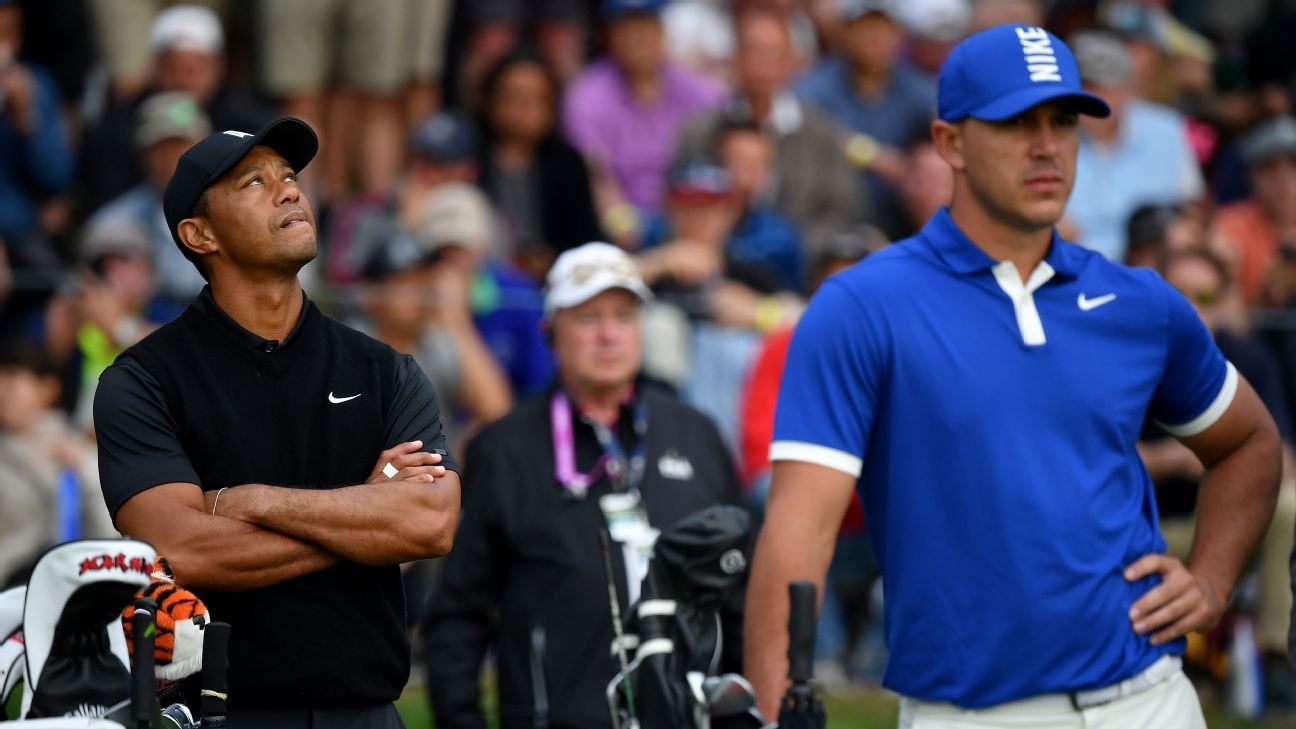 SAN FRANCISCO — At long last, golf will see a major championship played in 2020. It’s been awhile. When Shane Lowry clutched the Claret Jug at Royal Portrush last summer, it seemed as if it would be a long wait until the Masters. Well, how about adding another four months to that?

The PGA Championship at TPC Harding Park is one of just three major championships on the 2020 schedule because of the coronavirus pandemic. In April, The Open decided to cancel, while the PGA was rescheduled for this week, with the U.S. Open slated for Sept. 17-20 and the Masters planned for Nov. 12-15.

But first things first: a very unusual PGA Championship and all it entails.

The Open ended July 21, 2019. The PGA begins on Aug. 6, nearly 13 months later. It’s the longest such streak between major championships since the gap from 1942 to 1944 that lasted 27 months between PGA Championships. The PGA was the only major played in those three years during World War II. The next-longest streak between majors was from the 1944 PGA to the 1945 PGA, which was 11 months.

Brooks Koepka is trying for his third consecutive PGA Championship win. He won by 2 shots over Tiger Woods at Bellerive in 2018, then hung on to defeat Dustin Johnson at Bethpage Black last year.

The four-time major winner was top-four in all four major championships last year, with that PGA win, a tie for second at the Masters, a solo second at the U.S. Open and a tie for fourth at The Open. He then won the WGC-FedEx St. Jude the week after The Open.

Before this week in Memphis, when he challenged eventual winner Justin Thomas up until the very last hole, not much had gone well for him. Koepka, after finishing fourth at the Tour Championship last August, had a stem cell procedure done on his left knee. He missed six weeks, returned and missed the cut in Las Vegas, then aggravated the injury at the CJ Cup in South Korea when he slipped on a wet path. He took the rest of the year off and had not been the same since, posting just one top 10 before this week’s strong showing.

Koepka said his left knee is still bothering him, and although he maintains that it is not an excuse for his poor play, it’s difficult not to see the correlation. Perhaps, though, everything is back in place thanks to his week in Memphis.

The quest for history

Only six players in all of major championship history dating to 1860 have won a major three consecutive times. The last to do so was Australia’s Peter Thomson at The Open 1954-1956. The last to do so at the PGA was Walter Hagen, who won the championship four straight years (1924-27) when it was contested as match play. Koepka looks to join them. He was going for a three-peat at the U.S. Open last year when he finished second to Gary Woodland.

As is usually the case at the PGA, it is stout. For now, it has 92 of the top 100 in the world, with only Lee Westwood, Eddie Pepperell, Charles Howell III, Thomas Pieters and Shugo Imahira and Branden Grace missing.

Aside from Adam Scott, nobody other than Woods — and perhaps the 20 club pros in the field — will be less prepared for the PGA Championship than four-time PGA Championship winner Woods. Scott, who won the Genesis Invitational in February, did not return to the United States until a few weeks ago and has not played in any of the tournaments on the PGA Tour’s revised schedule.

Woods played just one, the Memorial Tournament, where back stiffness in the second round led to a 76 and barely making the cut. He ended up tied for 40th and needed to get a lot of preparations done at home the past two weeks to sort out issues with his putting and short-iron play.

Harding Park figures to play far easier than Bethpage Black last year; Woods missed the cut by a shot in his first event after his Masters win. That should help. But it also means he’ll need to make a bunch of birdies. He has had success here, winning the 2005 WGC event and going 5-0 at the 2009 Presidents Cup. But those events were a long time ago, the greens are not the same, and how much Woods is able to practice on the course leading up to the tournament could be an important factor.

Really want to dive into the year’s first major? We have you covered. ESPN and ESPN+ will televise and stream a total of 134 hours of live action, and that doesn’t include tee time and featured group reveals, player news conferences and interviews, SportsCenter and the ESPN+ show “America’s Caddie.”

The nickname for Bryson DeChambeau‘s driver has been taken by the new Seattle NHL team, which might give the golfer even more reason to smash his tee shots into oblivion. How that works out at a major championship will be interesting to see.

DeChambeau has been on fire since the tour restarted in June, contending in his first four events and winning the Rocket Mortgage Classic. He had a mini-meltdown at the Memorial when he made a 10 on the 15th hole of the second round and missed the cut, but DeChambeau has been playing too well for that to be considered anything but an aberration.

Heading into the WGC-FedEx St. Jude Invitational, DeChambeau had hit 40 drives of 350 yards or more in the events since the break. His weight gain and gym work have transformed him into one of the game’s longest drivers — if not the longest. He is up more than 20 yards since last year.

Now comes the interesting part. Major championship venues are typically set up to be more difficult than regular tour events: The rough is longer, the fairways narrower. It’s harder to simply bomb a tee shot and play from the rough. Muirfield Village for the Memorial was set up more like a major, and DeChambeau struggled.

To date, DeChambeau has never finished better than a tie for 15th at a major championship. Now we see whether that added length will help him contend.

Jon Rahm surged to the No. 1 spot in the world with his convincing victory at the Memorial. DeChambeau has a win and three other top-10 finishes since the restart. Justin Thomas has been steady, although he let a great chance at victory get away at the Workday Charity Open. Webb Simpson, with a victory at the RBC Heritage, has moved to fourth in the world. Collin Morikawa has a victory. Tony Finau has contended. All should feel good going to Harding Park.

Rory McIlroy has been a bit off in the return. In four events before the WGC-FedEx, he failed to crack the top 10. Before the pandemic break, he was one of the hottest and most consistent players in the game, finishing in the top five in seven consecutive events going back to last fall. McIlroy won the WGC-Match Play at Harding Park, so perhaps some good vibes will help him. Koepka, of course, is not playing like the guy who won four majors over the past four years including back-to-back PGAs. Woods has simply not played enough. And then there is Jordan Spieth, who has slipped to 59th in the world and hasn’t had a top-5 finish since last year’s PGA — a span of 24 events. This will be his fourth attempt at completing the career Grand Slam.

We know the U.S. Open won’t have spectators but have gotten no word from the Masters. The PGA Championship was the first to decide to play behind closed doors. That decision was made long ago, and given the number of coronavirus cases throughout the United States, it appears to be a good move. There are likely going to be fewer than 2,000 people on site, many of them volunteers and television production people.

It is going to be weird to have a tournament of this stature played before an empty house. Several players have noted the difference. Harding Park set up nicely for spectators during past events. But having no fans has worked at PGA Tour events to date, and golf fans anecdotally seem to be OK with the idea of watching a telecast without the buzz generated by fans. But will it be different at a major?

The PGA of America is taking its cues from the PGA Tour when it comes to safety measures at the PGA Championship. As on the PGA Tour, all players and caddies will be tested upon arrival in San Francisco and not permitted on the grounds at Harding Park immediately. A positive test means the player must withdraw and self-isolate. Although it has yet to be announced, it appears the PGA of America also will follow the PGA Tour’s protocol that will excuse a positive test from players who previously tested positive but are past 10 days since experiencing symptoms and at least 24 hours removed from a fever. According to the Centers for Disease Control and Prevention, such people are no longer believed to be contagious and are permitted to go back to work.

Like the PGA Tour, the PGA of America is providing a main hotel for players and caddies but not requiring that they stay there. Family members are not permitted at the course, but a player can bring a trainer and two coaches — up one from what the PGA Tour allows. The PGA of America is recommending “shelter in place” for players and caddies when not at the course.

A somewhat surprising choice for a major championship when it was named, TPC Harding Park is a public course that previously hosted the 2015 WGC-Match Play, won by Rory McIlroy, the 2009 Presidents Cup and the 2005 WGC-American Express Championship, won by Tiger Woods. It was also home to the Charles Schwab Cup Championship on the then-Champions Tour three times.

Harding Park has some heavy hitters nearby in Lake Merced Golf Club, San Francisco Golf Club and Olympic Club. Olympic has hosted five previous U.S. Opens and will be the site of a PGA Championship in 2028 as well as the 2032 Ryder Cup. It will also reportedly be the home of a future PGA Tour event hosted by NBA star Steph Curry.

But it is also a heavily played public course and underwent a significant renovation in 2005 and again in 2014, when the greens were redone and a bent grass surface was put in place. It typically plays as a par-72 but, stretched to over 7,200 yards for the PGA, will be a par-70 for the championship.

Back where we started