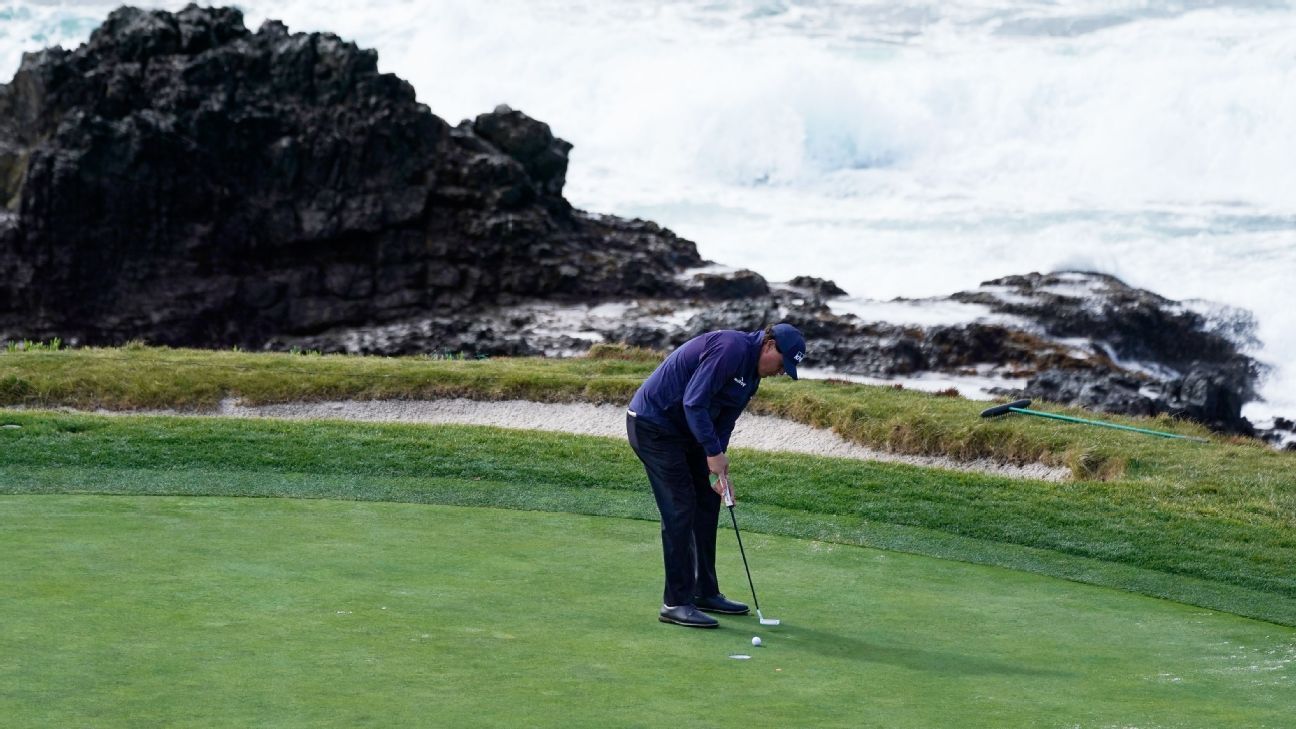 The steam coming off his head in the Sunday night gloaming at Pebble Beach was undoubtedly due to the frigid air that permeated the tournament, although few would be surprised if Phil Mickelson really was seething over the idea that he wouldn’t be allowed to finish despite two holes to play in enveloping darkness.

His path to victory these days is never going to be mundane, even in a tournament where he went an entire round without missing a fairway — a 20-year first.

And sure enough, he managed to visit unknown parts of the Monterey Peninsula with a few wayward tee shots, endured a soggy, bone-numbing array of 5-plus-hour rounds, waited out a Sunday hailstorm that for a time whitened the course, made up a 3-shot deficit on Paul Casey and then — with victory imminent — all but pleaded to finish when all that would have been visible was his chattering teeth.

No doubt, Mickelson wanted to get home to Southern California on Sunday night, and he clearly wasn’t concerned about squandering a chance at victory because he couldn’t see what he was doing. Phil was on a roll, and wanted to finish it off.

Instead, he had to return early Monday morning to complete his 44th PGA Tour victory, claiming a fifth AT&T Pebble Beach National Pro-Am while also becoming the eighth-oldest winner in PGA Tour history. 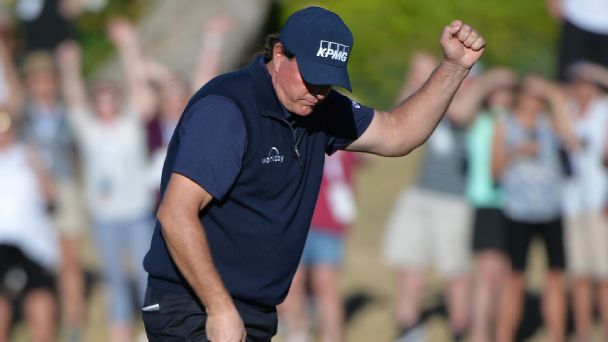 How impressive was Phil’s win at Pebble Beach? Here’s how:

• Fifth win at Pebble Beach, tying Mark O’Meara for most ever.
• First Monday winner at Pebble since Tiger Woods won a Monday finish in 2000.
• At 48, oldest winner on Tour since Davis Love won at 53 years old in 2015.
• Sixth win since turning 40. Only eight players have more Tour wins after turning 40.
• One of three players (Kenny Perry, Fred Funk) in pas 50 yeas to win multiple times on at 47 or older.
• Win No. 44, putting him one shy of tying Walter Hagan for eighth all time.

For years, Mickelson, 48, has rebuffed talk of his age, choosing to focus on aspects that encouraged him going forward even through a four-year stretch without a victory.

Whether it was continuing to be a part of U.S. Ryder Cup and Presidents Cup teams, finding a new workout routine, changing coaches, discovering a healthier diet, befriending — and needling — tour players who are young enough to be his son, Mickelson did his best to stay young.

The most recent discovery was something he dropped after Friday’s round about some extra distance he picked up.

“So at the end of last year, even though I played poorly, I had something happen where it seemed like overnight — it had really been in the works — where my driver speed shot up 5, 6 miles an hour, which rarely ever happens to anybody, let alone somebody in their late 40s,” he said. “So that led me to be pretty optimistic heading into this year.

“I think that’s going to lead to some good things. If you’re going to be crooked off the tee, you sure as heck better be long and that’s kind of the way I’m trying to approach it.”

Mickelson now has a runner-up finish at the Desert Classic and a victory in four starts this season. A missed cut in Phoenix, Mickelson said, was due in part to a driver experimentation that he quickly abandoned.

That also led him to enter this week’s Genesis Open, which he had not planned to play, prior to defending a title at the WGC-Mexico Championship next week.

He is now ranked 17th in the world and has positioned himself for a run at another Presidents Cup team. It’s a remarkable turnaround since the last-place finish at the Tour Championship and lousy Ryder Cup performance.

Undoubtedly Mickelson will be the subject of considerable conjecture when the golf world returns to Pebble Beach in June for the 119th playing of the U.S. Open, the major that defines Lefty’s bouts of futility more than anything. Six runner-up finishes, some in the most heartbreaking fashion, dot his career, the tournament keeping him from a career Grand Slam.

Nobody has ever won a major championship at the age Mickelson is at now, but then again, not too many players have had the confidence to play two holes essentially blindfolded — as he wanted to do to finish this off Sunday night instead of Monday morning.

The course will be completely different in June, with the rough taller and the greens firmer and no amateurs to take the edge off the proceedings. But that talk is for a different day.

Pebble, of course, would provide the perfect symmetry for such a storybook triumph. It is where he began his professional career at the 1992 U.S. Open. And it is where he will turn 49 on the final day of the 2019 U.S. Open.

A dream? Perhaps. But you can bet Mickelson sees such a scenario playing out clear as day.