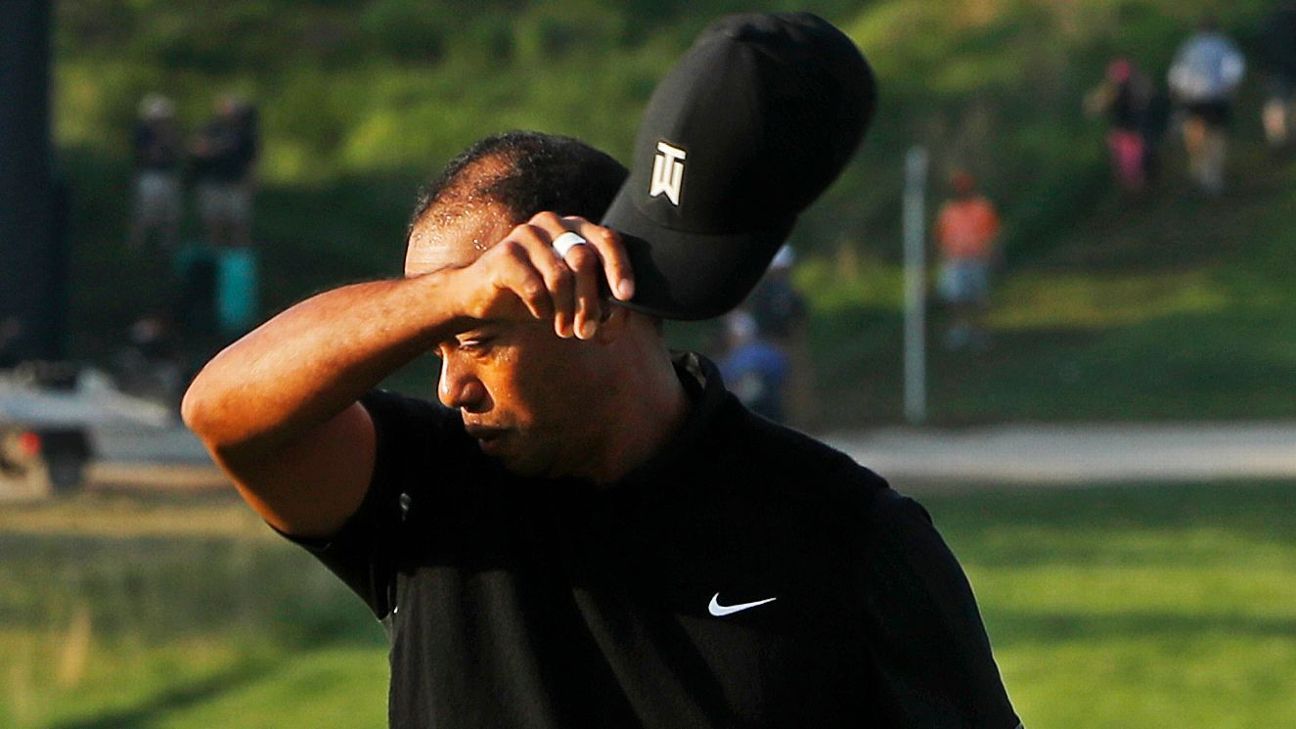 FARMINGDALE, N.Y. — Deep down, in a place he would never admit exists for public consumption, Tiger Woods knew he never had a chance to contend in this PGA Championship.

Woods gave himself up after missing the cut at Bethpage Black, after losing his head-to-head duel with Brooks Koepka by an astounding 17 strokes. He spoke of how good it felt to be the reigning Masters champ, and then he interrupted a short but spirited walk to the clubhouse to merrily sign a hat for a man who had rushed up to his side, and then to merrily pose for a side-by-side photo with a woman who had done the same. Tiger also gave a hearty, backslapping bear hug to another man, Ray Taccolini, a philanthropic supporter of the golfer’s foundation and someone who congratulated him on a wonderful tournament.

The wonderful tournament that took place last month, of course.

“Nice Masters, good to have you back,” Taccolini told Woods. “I’m very happy for you.”

The man later explained that he attended the green jacket ceremony at Augusta National but didn’t get the chance to congratulate the five-time winner.

This scene told you everything you needed to know about Woods’ approach to the first major of the rest of his life. Tiger would’ve never, ever sounded and acted so happy to miss a cut in his prime, when he remained hopelessly committed to a seek-and-destroy mission every week on tour.

But he is 43 now, coming off his first Masters victory in 14 years and his first major victory in 11. Before his spinal fusion surgery only two years ago, Woods thought he was finished as a competitive golfer. He was merely hoping his fourth back surgery would relieve the soul-crushing pain that was dominating him like he had dominated his opponents for so many years.

So that’s why he refused to fake it and act terribly disappointed that he was going home after the record-shattering Brooks Koepka spent two days dunking on him, hanging on the rim, and kicking him in the teeth for good measure. Koepka didn’t merely posterize Woods in their pairing, mocking his 5-over finish with his own 12-under score; he set a major championship record with his 36-hole total of 128.

And then Tiger stepped to the microphone and batted away any suggestion that he erred in not wedging in some live tournament reps between Augusta and Bethpage.

“No, no, no. Definitely not,” he said. “I’m the Masters champion and 43 years old, and that’s a pretty good accomplishment.”

Asked if it was always going to be difficult to recover from the most emotional triumph of his career, Woods called it “a nice problem to have” and repeated that he’s enjoyed being a Masters winner again.

Young Tiger never would have sounded so willing to ease the sting of failure with reminders of recent success. But his was the grown-up voice of perspective and reason. Woods has been playing professional golf for more than two decades, and he had to know that a month-long layoff, a mere nine practice holes this week, and a sudden Wednesday illness would conspire to kill his chances on a monstrous course known to emasculate younger and sturdier men.

He just wasn’t about to say it. So instead Woods told everyone he felt fine and was ready to go, even if it wasn’t true. On Friday, Woods hit three fairways, missed half the greens and missed a ton of putts. Other than that, he looked great.

And that was OK. Bethpage paid him back (with interest) for his 2002 U.S. Open victory on its turf, and Woods accepted the deal. He was a spent, beaten man after spending two days in a steel-cage match with an unforgiving ballpark and a locked-in slugger, Koepka, who is doing a fine impression of an in-his-prime Woods.

“Relative to the field,” Tiger said, “I was about that long early in my career.”

Even if those days are over, Tiger’s winning days aren’t, or shouldn’t be, when it comes to the majors. He needs to get some more rest, find his swing at Jack Nicklaus‘ tournament in Ohio in a few weeks, and then resume his chase of Nicklaus’ record of 18 major titles at Pebble Beach next month.

“It’s great to be part of the narrative,” Woods said before this PGA Championship started.

In other words, he’s thrilled to be a relevant golfer again. That’s why he missed the cut Friday, and acted as if he’d landed a spot in Saturday’s final group with his guy Koepka.