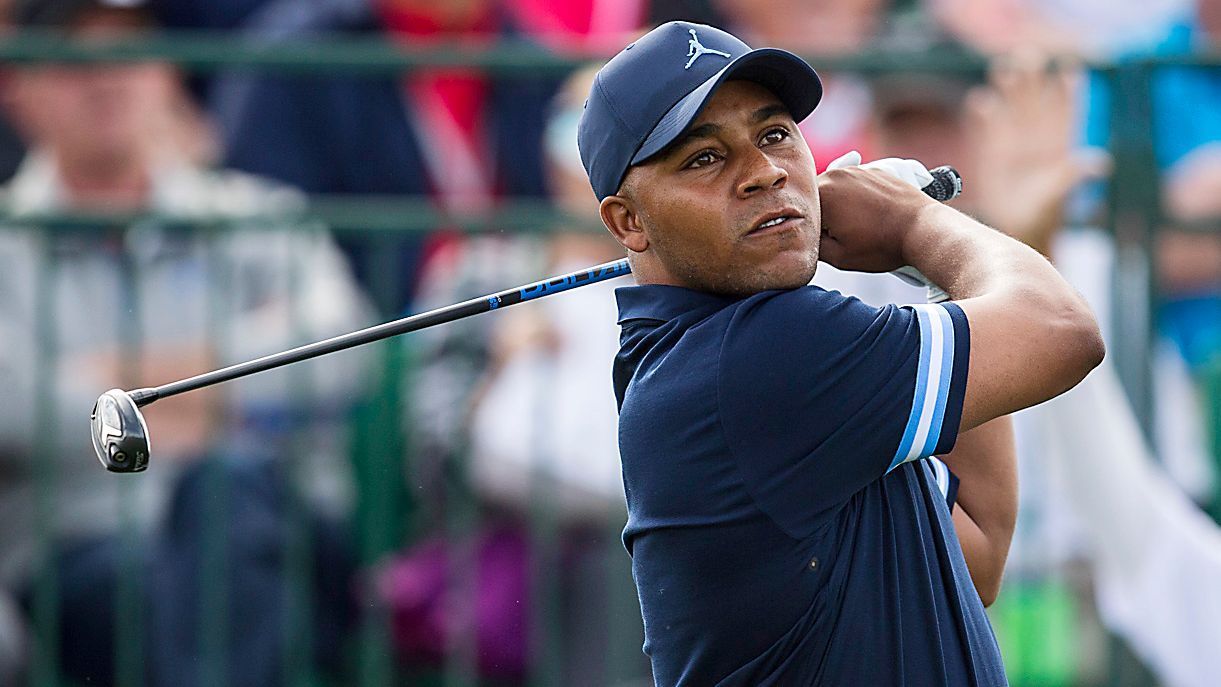 SCOTTSDALE, Ariz. — Harold Varner III overcame an early bogey with three straight birdies, moving himself into position to tie for the lead.

He got it with a long putt and a dab on the loudest hole in golf.

Varner snaked in a long birdie putt on the par-3 16th hole at TPC Scottsdale on Thursday, capping off a 7-under 64 to tie Rickie Fowler and Justin Thomas for the first-round lead at the Phoenix Open.

Varner set off the rowdiest roars of the afternoon with his 31-foot putt at the hole turned into a stadium, celebrating with the dab toward the sky.

“I love entertaining people, and what better hole to do it,” Varner said.

Playing in pristine conditions before storms are expected to hit this weekend, Fowler and Thomas made their way around the desert layout without finding much trouble.

Martin Laird and J.T. Poston were a shot back at 65, and four players shot 66, including two-time Masters champion Bubba Watson. Another 16 players shot 67 on a day when 70 players were under par.

Among them was Oklahoma State sophomore Matthew Wolff, who overcame some early nerves in his first PGA Tour start. The 19-year-old had a bogey on his second hole, the par-4 11th, but closed with five birdies to open three shots out of the lead.

Varner, who missed the cut at Torrey Pines last week, blew his first putt past the hole on the par-4 second hole for a three-putt bogey, but bounced back with three straight birdies on the front nine. He had a two-putt birdie on the par-5 13th and got up-and-down from a greenside bunker at the other back-nine par 5, the 15th.

Following his dabbing birdie on No. 16, Varner missed two chances for the outright lead on the closing holes. He three-putted from 105 feet on the drivable par-4 17th hole and missed an 18-foot birdie putt on 18.

Even so, Varner carded his lowest round of the season and earned a tie with his two desert roommates.

“I played well, drove it really well and had lots of opportunities,” Varner said. “I’m just excited to be playing in this event. I love this event.”

Thomas opened 2019 with a third-place finish at the Sentry Tournament of Champions and was tied for 16th at the Sony Open with four rounds in the 60s.

Playing in near-perfect conditions in the morning, the 2017 PGA Championship winner started on the back nine and went out in 2-under 34 with birdies on Nos. 15 and 18. Thomas’ 9-foot putt on 18 began a string of six birdies in seven holes, including five on putts inside of 5 feet to shoot a 5-under 30 on the front nine.

“I was in control of everything tee to green,” Thomas said. “I didn’t necessarily get off to the greatest start scorewise, but I felt like I was playing playing well. Those front pins were tucked pins, very hard to get to. It was nice to get finally get off to a good start at this event.”

Fowler, twice a runner-up at the Phoenix Open, also started on No. 10 and jump-started his round with an eagle on the par-5 13th after knocking his 236-yard approach shot to 17 feet. He also two-putted from 45 feet for birdie on No. 3, but misread a putt on the par-4 ninth that would have given him the outright lead — and a chance to trash-talk his roommate for the week, Thomas.

“I was really hoping I was going to make that last putt,” he said. “We’re sharing a house this week, so I wanted bragging rights at dinner tonight.”

Fowler with have to settle for a share of the lead with his buddy and the dabbing Varner.