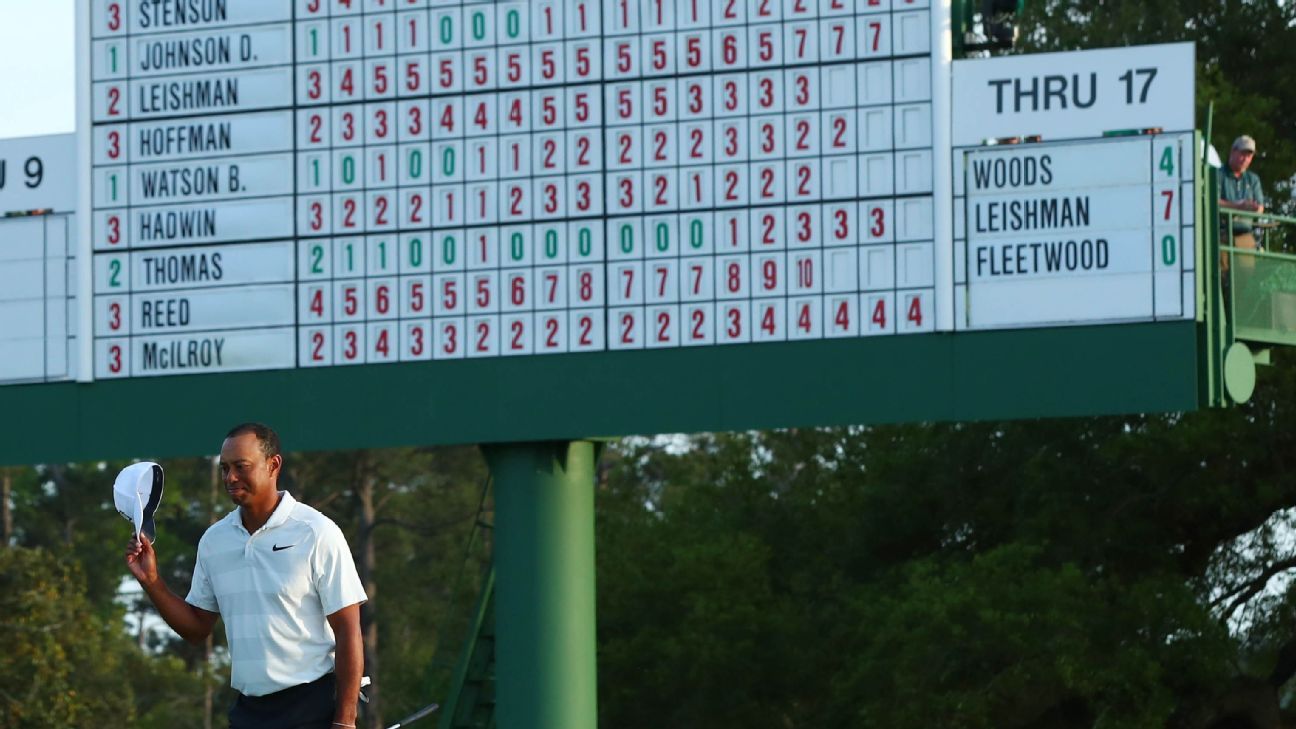 For Tiger Woods, a trip to Augusta National is expected this week, perhaps the disappointment by then having dissipated after a frustrating end to the WGC-Dell Technologies Match Play. He said it would take a few days to shake the sting of defeat. Right now, there’s little time to waste.

The Masters begins April 11, and for Woods, the work at PGA events is now done. Woods, who is ranked 12th in the world after his tie for fifth (quarterfinal loss) at the Match Play, is coming off his best finish of the year.

But unlike a year ago, Woods will not go to the year’s first major championship with the buzz of success enveloping him. Perhaps that is a good thing. A year ago, Woods arrived at the Masters among the tournament favorites, which seemed too soon in light of how much time he had been away from the game because of his spinal fusion surgery.

The Masters last year was just the sixth tournament of his comeback. Now he’s played 25 official events, as well as the Hero World Challenge twice and the Ryder Cup.

Woods was never in the Masters hunt a year ago, breaking par only in the final round and finishing 16 strokes behind winner Patrick Reed in a tie for 32nd place.

This year, his preparation going into the Masters is similar, the results offering an interesting comparison.

In 2018, Woods tied for 23rd at the Farmers Insurance Open, missed the cut at the Genesis Open, was 12th at the Honda Classic, tied for second at the Valspar Championship and tied for fifth at the Arnold Palmer Invitational.

Unlike a year ago, Woods was not in contention to win on Sunday at any of the events he played this year. He has finished no better than eight strokes behind the winner. He also earned less world ranking points in his five starts (47.86 last year to 35.67 this year), despite playing two WGCs and not missing any cuts. Missing the Arnold Palmer Invitational because of a neck issue and skipping the Valspar Championship, events where he had success a year ago, proved to be a big difference.

Still, it’s hard not to believe that Woods’ game is in far better shape than it was in 2018 heading to the Masters, even if the preceding results might not be as impressive. He’s stronger, seemingly healthier and has his equipment dialed in.

In the category of “reps,” Woods played 18 rounds going into the Masters a year ago. He will have played 21 this year, including his five during the WGC-Match Play.

“Last year was more of a work in progress even though he had a couple of good finishes,” said Woods’ caddie, Joe LaCava. “He was still concerned with his health and now I think we’re past that. He was in a pretty good groove last year. I would say we’re probably a little more optimistic knowing the health is there.”

Here is a look at how Woods’ game stacks up heading to Augusta.

This continues to be a concern. Forget the putt Woods missed that would have extended his match against Lucas Bjerregaard on Saturday. He missed a couple of short ones earlier that day and has had shaky moments throughout the year. Six three-putt greens at both Riviera and Mexico cost him higher finishes at both tournaments. He seemed to find a groove on smoother greens in Florida at The Players. His issues at Austin Country Club during the Match Play seemed to center around difficulty reading the greens at a tricky layout. A lack of rounds there certainly didn’t help, either.

Whatever the case, Woods ranks just 78th on the PGA Tour in strokes gained putting. He is also 84th from 4 to 8 feet and 150th from 5 feet. All of that suggests too many misses from a range that is so important.

And the greens at Augusta are such a key to success. Avoiding three putts is imperative, but far from easy. During a final-round 69 a year ago, Woods hit 15 of 18 greens but took 32 putts, missing five from inside 6 feet and three-putting twice.

It is difficult to overstate how big this will be for Woods next week.

Woods remains among the best in the world at this part of the game. It is imperative that he not falter. Putting second shots in the correct spot is vital to scoring at Augusta National. Woods is 17th in strokes gained approach and eighth in strokes gained tee to green. That is a good sign for him. So is ranking third in greens in regulation at 74 percent.

The bigger issue is Woods’ wedge play. It was a surprising problem at Augusta National last year and has been a frustration at times this year. Woods is 103th on the PGA Tour in approaches from 100 to 125 yards. He is 96th from 125 to 150. And yet he is 14th from 150 to 175. The closer Woods gets to the hole, the worse he’s performed in relation to his peers.

Never his strongest attribute, Woods is miles ahead of where he was last year. His friend and frequent golf partner Rob McNamara likened Woods’ driving to the kind of success he had off the tee in the 2005 time frame. It was impressive to see Woods keep up with Rory McIlroy at the Match Play on Saturday. Woods has no trouble getting it out there when necessary.

Heading into The Open last year — Woods finished tied for sixth at Carnoustie — he ranked 113th on the PGA Tour in strokes gained off the tee; he’s now 67th. He’s also 96th in total driving and has improved greatly in accuracy, ranking 53rd on tour and hitting more than 64 percent of his fairways.

And hitting fairways at Augusta is far more important than when Woods won the first of his four Masters championships in 1997.

“It is way more challenging off the tees than it used to be,” Woods said. “And I remember Raymond (Floyd) telling me on [No.] 9, just hit it as far right as you possibly can. Well, you can’t do that anymore, there’s a forest down the right. On 11, you try to hit the ball up against the gallery. Well, now there is literally a forest that is there. That fairway used to be 80 yards wide. It’s no longer the case.”

Woods said after The Players that his game was “right on track” for the Masters. He’s now added nearly five rounds over four days at the Match Play, some of which produced some excellent golf. In defeat Saturday against Bjerregaard, Woods still made seven birdies.

And by not advancing to Sunday’s semifinals, Woods avoided a 36-hole day in cold, windy weather. It was 41 degrees at the start of play Sunday.

“This was a big step in the right direction for sure,” LaCava said. “He got some more rounds in, played some decent golf in the heat of battle. Definitely more reason to be optimistic because the golf got better each day.