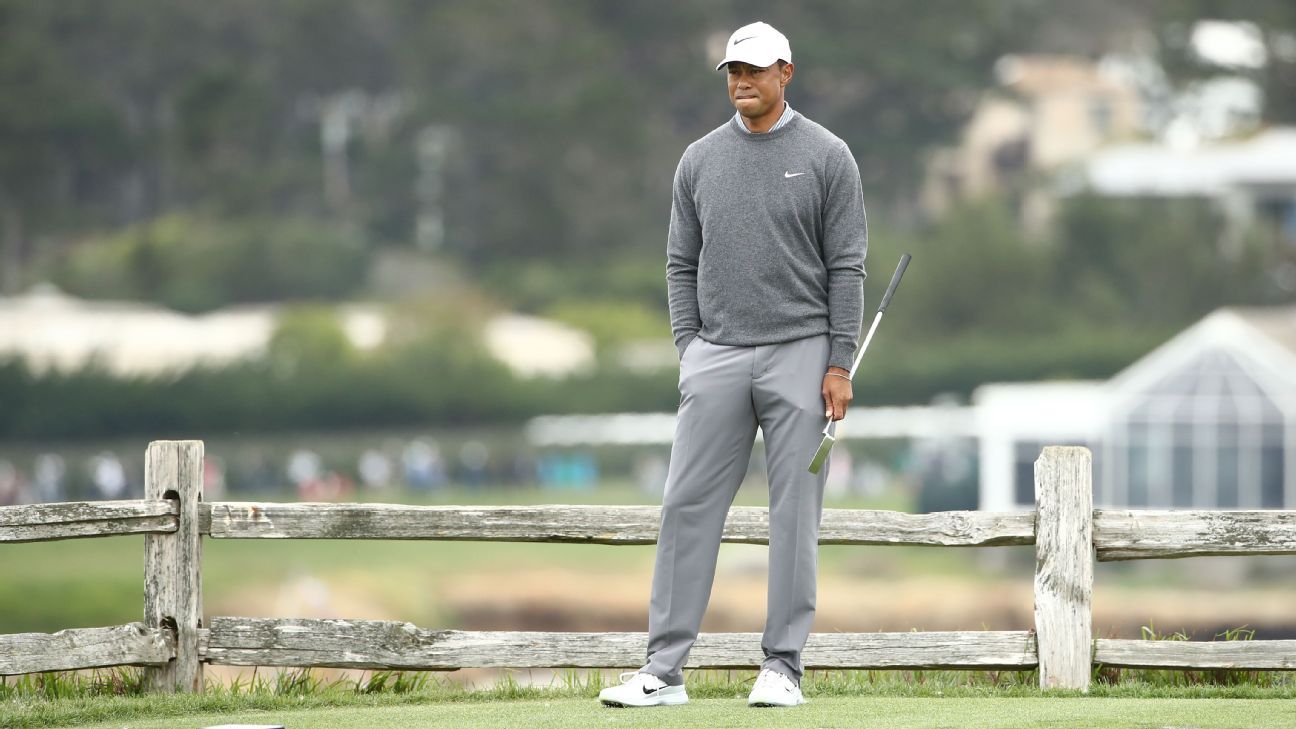 PEBBLE BEACH, Calif. — Tiger Woods does not figure to be picking up a golf club anytime soon. Much to the dismay of tournament organizers in Detroit and Minneapolis, he will instead spend time with his family, decompressing from one major championship, then trying to build back up to another.

That he will again go the space of time between major championships without playing in a regular tournament will undoubtedly be cause for criticism, and seeing how that strategy did not work out so great prior to the PGA Championship, well … fair enough.

But any such conjecture is looking at Woods through the prism of golfing machine rather than human being.

A generation ago, when he was dominating the game like no one before or since, golf was his sole pursuit. When he won the U.S. Open at Pebble Beach in 2000 by 15 shots, Woods was 24 years old with a strong back and a sinewy frame and hours upon hours to spend practicing and working on his craft.

If you haven’t noticed, things are considerably different now.

The way he looked at times during the U.S. Open at Pebble Beach should have been a scary reminder of the four back surgeries and the up-and-down nature of his fitness. Woods, at times, appears as if he can’t bend over to tie his shoes. Then he launches a 5-iron into the air and carries a bunker from 210 yards.

Cool, misty temperatures did him no favors, making one pine for the days of multiple port-o-let visits to change soaked shirts at Bellerive last August. Or the humid air of Atlanta, where he won the Tour Championship, sweat beading on his face as he traversed the final hole with a horde of screaming fans in his wake. Or even Augusta, Georgia, in April, where pleasant temperatures helped keep his back loose and mind fresh.

And it doesn’t figure to be particularly warm at Royal Portrush in July.

“I know that Florida will not be the same temperature as Northern Ireland,” Woods said. “I’m not going to be practicing with any sweaters at home, but it will be nice to get to Portrush and get with it again.”

That is some four weeks away. And this, again, is where life intercedes. Woods, 43, has two kids, Samantha, 12, and Charlie, 10. His mom, Kultida, is 75. They decided to spend some time together after the U.S. Open. Who can blame them? Does some Rocket Mortgage or 3M event mean more to him at this point?

Then there is the schedule. All along, it appeared that Woods was leaning toward not playing between the two Opens. From a pure golf standpoint, this is curious. But part of that has to do with the condensed PGA Tour schedule that will see him play possibly five times in six weeks if he plays the WGC-FedEx St. Jude in Memphis the week following The Open, followed a few weeks later by the FedEx Cup playoffs.

Woods has played back-to-back events just once all year — the Genesis Open and the WGC-Mexico Championship. And it was after the latter tournament we learned he had a neck strain that kept him from playing the Arnold Palmer Invitational a few weeks later.

So does he now want to make it six tournaments in eight weeks? That’s the workload he’d be facing if he added the Minnesota tournament and played in Memphis, too. And Woods has said on several occasions that he would not put himself through the rigors of 2018, when he played seven out of nine to end the season.

Skipping a tournament before The Open is not ideal. Woods has done it just a handful of times in his career, to mixed results. He appeared unprepared at Bethpage, and not having a tournament prior to provide him feedback was undoubtedly a factor. Now he needs to figure out a better way to prepare without competition as he heads into the final major championship of the year.

“It’s just trying to wind down from the championship as well as my [workouts] and getting back into it,” he said. “I’ve never been up to Portrush, and I’m looking forward to getting up there and taking a look at the golf course and trying to figure it out.

“I hope that my practice rounds are such that we get different winds, especially on a golf course that I’ve never played, and to get a different feel for how it could play for the week. And definitely have to do my homework once I get there.”

Woods probably needs more than homework. No amount of course study matters if his game is missing. He needs to fix the inconsistencies that plagued him at Bethpage, Muirfield Village and Pebble Beach. A regular tournament to bridge the gap helps assess those things; he’s looking at trying to figure it out in the dirt.

At times, his iron play — always the hallmark of his game — has uncharacteristically stalled him. For the most part, Woods has driven the ball well enough off the tee and hit enough greens to be competitive, but at times his short iron wedge play has mysteriously left him unable to take advantage of scoring chances.

And then there is putting, an issue for much of the past two years and one that plagued Woods in spurts at Pebble Beach. He ranked 26th in the field in strokes gained putting, a decent week on the greens but not enough to overcome a falloff in approach shots. Woods led the PGA Tour in greens in regulation coming in; he was 20th at Pebble Beach.

As time passes since the Masters victory, it has become clear that winning a 15th major changed the direction of this season. The work Woods put into the comeback — first winning a regular tournament last year, then capturing a major — was rewarded, and possibly extinguished the fire within. There was a natural letdown, one that might be difficult to overcome anytime soon.

At least in the relative short term, Woods has no concern about qualifying for World Golf Championship events or the FedEx Cup. How much of a priority the latter is at this point is unclear, although as competitive as he is, he will do all he can to put himself in the best position. He remains ranked fifth in the world, and is 17th in the points standings.

For now, Woods wants to spend time with his family, and gear up for The Open at Portrush in his own way. In strictly golf terms, it is far from the best approach, as he is well aware. But Tiger at 43 is considerably different from Tiger at 24.

That has been obvious for some time; these developments are simply a stark reminder.