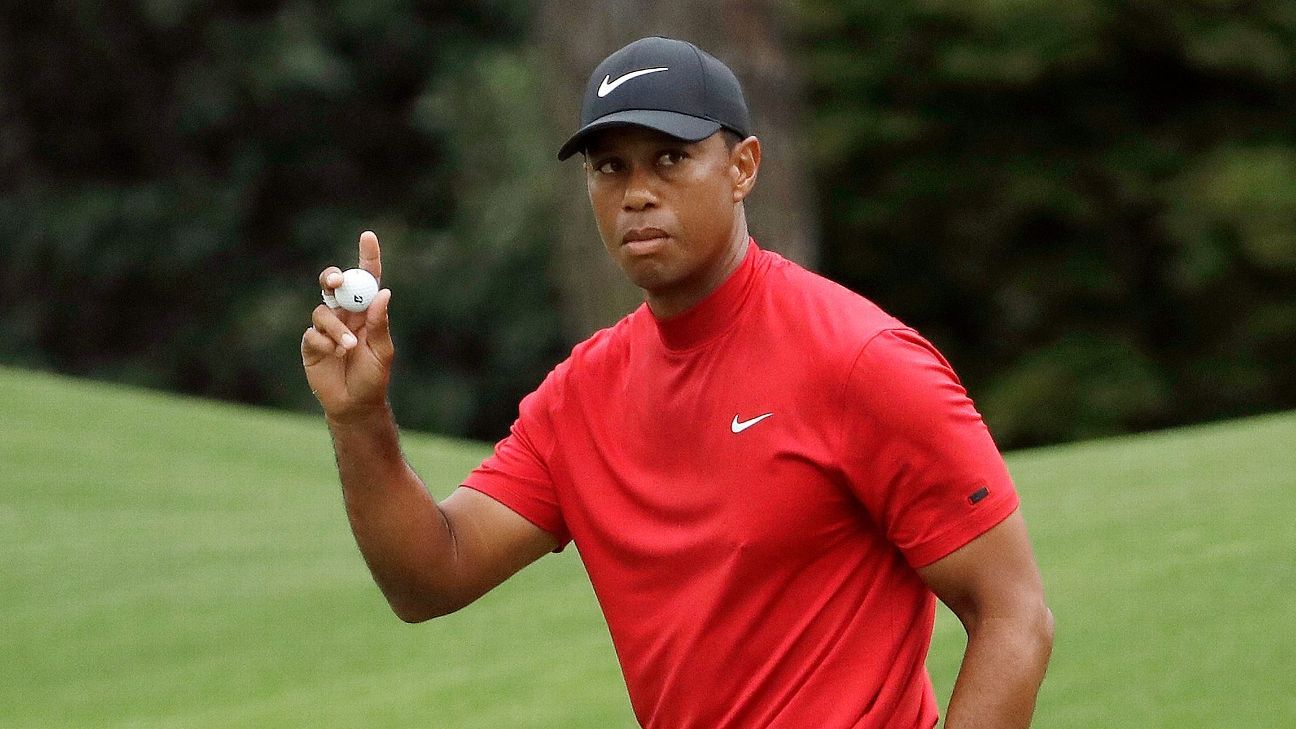 The first major of the year is in the books for Tiger Woods. Now that he has won his first major in more than 10 years, are the floodgates about to open? Is Jack Nicklaus’ record of 18 majors back in play? We asked some of our golf experts to answer some pressing Tiger questions.

Will Tiger win another major this year?

Bob Harig: I had him winning a major this year but picked the wrong one. Pebble Beach sets up perfectly for him because it doesn’t require the length of a Bethpage or — so I thought — Augusta National. His 2000 U.S. Open victory there is a nice boost, but it is basically irrelevant today. He can maneuver his way around there, and places where a low score wins generally suit him. Why not?

Michael Collins: Well, it’s on now! Bethpage might play long and a little slower in May, but it’s not like Tiger hasn’t succeeded there in the past. Even if he doesn’t win that one, I’m all-in on Tiger at Pebble Beach in June. Once, shame on me, twice … ain’t gonna happen. The Open is the one that isn’t right for Tiger, so he’ll probably win that one just for spite and lose the other two.

Ian O’Connor: Yes. I’ll go with the U.S. Open at Pebble, the site of his most dominant major victory. Two majors this season would give him 16, and Jack Nicklaus officially starts to sweat.

Mark Schlabach: It’s not a question of whether we believe he’ll win another one. It’s that nearly every other player on the PGA Tour thinks he’ll win another one. He won the 2002 U.S. Open at Bethpage Black, the site of next month’s PGA Championship. He won the 2000 U.S. Open at Pebble Beach by a staggering 15 strokes. That’s the site of June’s U.S. Open. He has never played a competitive round at Royal Portrush in Northern Ireland, which hosts The Open in August. He won at Augusta National because he’s as familiar with the course as anyone and knows how to play it. I think he’ll be in the mix at the PGA Championship and The Open but ultimately come up short with top-five finishes.

Nick Pietruszkiewicz: I said before this season began that he would win two. Why would I change my mind now? As noted, he knows the venues incredibly well, having won majors at Bethpage and Pebble. So why not think big? Clearly, he does, having gone from thinking he was finished with competitive golf to winning the Masters 14 years after he last picked up a green jacket. We could be headed toward the Year of Tiger.

He has 15 major championships in his career. What will his final total be?

Harig: It’s all about his health. Can his back allow him to practice and compete enough to be sharp during the biggest tournaments? He has now contended in three straight majors, which is a lot more than many of the game’s top players can say. Can he win another one? Absolutely. Two more? Maybe. Let’s go with that and say he stops at 17.

Collins: One more this year and two more somewhere down the line in the future. Of course, it’s Tiger, so everything hinges on health. Stay healthy for at least three more years. When he ties Nicklaus, they’ll be no debate as to who the GOAT is, and to be honest, there shouldn’t be now.

O’Connor: Eighteen. Tiger might be like the Patriots, primed for a separate second dynasty. He’ll end up tied with Nicklaus but way ahead of him on the all-time tour victory list, sealing his standing as the GOAT.

Schlabach: As long as Tiger’s back holds up, I think he can challenge Jack Nicklaus’ 18 major championships, which are the most in PGA history. Tiger’s health is going to be big factor going forward, obviously. I could see him playing for five or six more years — Phil Mickelson turns 49 in June — so he’s going to have a bunch of chances. I’d put the over/under at 17. He’s going to be a factor at Augusta National every year.

Pietruszkiewicz: He ties Nicklaus and gets to 18. If my prediction holds up and he wins one more this year, that’s 16. Is it really unreasonable to think, now that he has broken through, that he can pick up two more over the next five or 10 years? It’s not. He’s back. He’s enjoying being back. He needed one to open the floodgates, and on an epic Sunday at Augusta, he got it.

Will he get to No. 1 in the world again?

Harig: We have seen how difficult the journey is as he has gotten closer to the top 10. He came into the Masters ranked 12th in the world, and a win moved him to sixth. It’s crowded at the top. Players such as Justin Rose, Dustin Johnson, Rory McIlroy and Bryson DeChambeau play more events and pack in more high finishes to earn points. Obviously, a few more victories would change things, but it seems unlikely that Tiger will get to No. 1

Collins: That’s an almost impossible question to answer because that means the guys at the top have to also fall off, and it’s hard to see that happening. Can Tiger win a couple more tournaments? Yes. But did you see anything that would make you believe Dustin or Brooks is going to just quit being competitive and winning? I’m going to have to say doubtful. Tiger getting back to world No. 1 I have a tough time saying right now. Ask me again after the PGA Championship — it’s right around the corner.

O’Connor: I don’t think so. He’ll get close but no cigar. I think Tiger can live without that No. 1 ranking. He’s focused on Snead and Nicklaus.

Schlabach: Tiger’s probably going to move to No. 6 after winning his fifth green jacket, so he’s right on the cusp of getting back into the top five. His victory at the TOUR Championship last year proved to him that he could win tournaments again, and his victory on Sunday proved to him that he could win majors again. Despite how Justin Rose and Rory McIlroy played this past weekend and the way Francesco Molinari closed on Sunday, they’re not going to step aside without a fight.

Pietruszkiewicz: No. There will still be bad weeks, when the mind and body are tired or tweaked. There will be some clunkers along the way. He’ll be focused for majors, but I’m not sure he will be locked in during enough regular Tour events to make the climb all the way back to No. 1.

Is there any other player you could see getting to double digits in major championships?

Harig: I just don’t see it happening. As great as Rory McIlroy is, he needs six more and is now into year five since winning his fourth. Spieth and Justin Thomas are certainly capable. Brooks Koepka won three in short order, but can we expect him to win seven more — or more than the career totals of Nick Faldo and Lee Trevino? It’s really hard. The competition is tough.

Collins: The next-closest player has four! No chance Rory McIlroy is getting to 10. Brooks Koepka would be the next-best shot, looking at the crew out there behind Rory. As much as I love these guys, there are too many of them to think one will outshine the rest for 10 majors. I’m gonna say nope!

O’Connor: I still think Rory has a shot to become the first non-American to get to double figures. Not a great shot, but he has a ton of career left.

Schlabach: You never say never, but it would be a pretty tall order for any other player out there. Mickelson (five major victories) is running out of time, and McIlroy (four), Jordan Spieth (three) and Brooks Koepka (three) are the only other active players with more than two. I think there’s too much parity and not a dominant enough player to do what Tiger has done.

Pietruszkiewicz: No chance. The talent pool is too deep, both in the United States and around the world. Rory is having a hard enough time getting to five, so it’s hard to imagine him getting to 10. Spieth looked like he couldn’t lose a few years ago. Now, you wonder if he’ll find the magic again. Golf is too hard and too complicated to sustain long enough to win double digits. That’s why people need to really, truly appreciate what Nicklaus, Tiger, Bobby Jones and Walter Hagen accomplished.