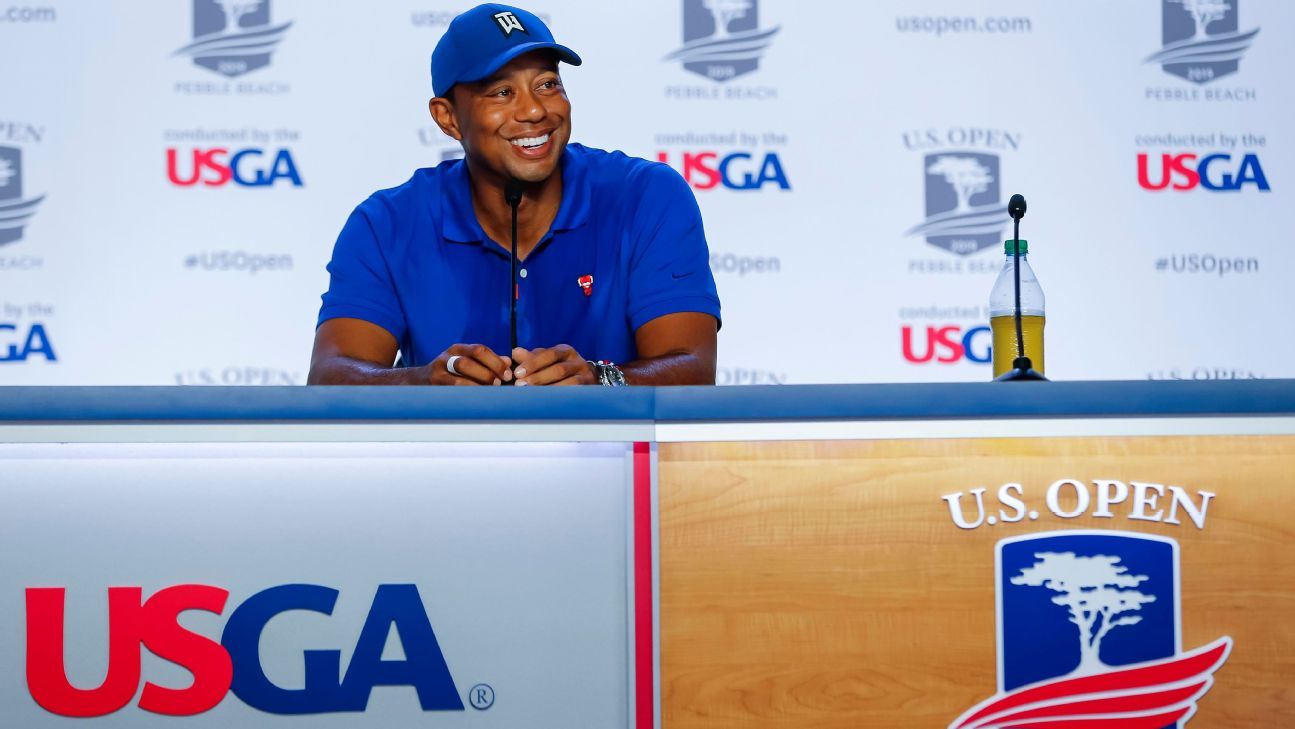 PEBBLE BEACH, Calif. — Back at the place where he produced what many considered his most impressive victory, Tiger Woods actually stayed off the course at Pebble Beach on Tuesday and worked on his putting in preparation for the U.S. Open.

Unlike 19 years ago, when Woods was 24 and played numerous practice rounds leading up to his record-setting victory at the 2000 U.S. Open, Woods, now 43, picks his spots and is again being careful with his preparation.

“Just a rest day,” said Woods, who is playing just his third tournament since winning the Masters in April. “I did the same thing at Augusta. Just trying to save my energy. More important for me to feel energized than it is to go out there and get wear and tear.”

Woods comes into the U.S. Open off a tie for ninth on June 2 at the Memorial and a good week of practice at home. He arrived at Pebble Beach on Sunday, played 18 holes, then played the first nine on Monday before later returning for an extensive putting session on Monday afternoon.

He practiced at Pebble Beach again on Tuesday, and worked on his putting with the help of instructor Matt Killen, who also worked with Woods some prior to the Players Championship in March.

“Yeah, Matt’s taking a look at my stroke,” Woods said. “Putting on poa [annua, the green surface at Pebble Beach] is very different than putting on bent. And so just trying to make sure that I’m rolling the ball like I need to for poa.”

Poa annua greens have given Woods fits at times in his career, despite the great success at Pebble Beach back in 2000 when “I made everything,” he said. That is also the surface he grew up on in Southern California and it is the grass on the greens at Torrey Pines in San Diego, where he has won eight times.

But recently, Woods has struggled on poa greens. He had one of the worst putting performances of his career earlier this year at Riviera and again struggled with his putting at the WGC-Mexico Championship the following week; both venues have poa greens.

And then there’s last month’s PGA Championship, where Woods again had difficulty on the poa annua greens.

“It just doesn’t take much to get off line on poa,” Woods said. “It gets a little bumpy, you happen to catch those little seed heads that start popping up. Bent sits down, poa perks up. And good putts look like they should go in, don’t go in. And you may pull or push one that happens to bounce back in the hole.

“The trick to putting on poa is to make sure they’re always below the hole. If you’re putting downhill, it’s like a Plinko effect, you’re going to go every which way. The key is to be below the hole where you can take low lines and try and take the bumpiness out of play.”

Tiger Woods, no stranger to significant injuries himself, was asked Tuesday at the U.S. Open of his thoughts on what happened to Durant:

It was sad. As athletes we’ve all been there to that spot when you just know it, that something just went, and can’t move, can’t do much of anything. And you can see it on his face, how solemn his face went. He knows it when things pop. You just know.
And I’ve been there. I’ve had it to my own Achilles. I’ve had it to my own back. I know what it feels like. It’s an awful feeling. And no one can help you. That’s the hard part. And whether he has a procedure going forward or not, or whatever it is, his offseason, what that entails, that’s the hardest part about it is the offseason or the rehab.
I mean, if he popped it, then that’s six to nine months of rehabbing. That’s what people don’t see, is all those long hours that really do suck. And why do we do it? Because we’re competitors. As athletes our job is to make the human body do something it was never meant to do and to do it efficiently and better than anybody who is doing it at the same time. Well, sometimes things go awry. And we saw it last night with Kevin.

Putting has been an issue for Woods throughout the year, despite his win at the Masters. He ranks 73rd on the PGA Tour in strokes gained putting and is outside of the top 100 in several other categories. He is 200th in three-putt avoidance, with 20 three-putt greens in 468 holes and 26 rounds.

Pebble’s greens are the smallest on the PGA Tour, which puts a premium on hitting them — and that is a category where Woods leads, hitting 72.86 percent. He also led the field in greens at the Masters.

Assessing where his game is now compared to the first two majors of the year, Woods said: “Augusta I was right where I needed to be,” he said. “I was hitting it high. I could shape it either way, and I could really hit a high hook. I felt very comfortable hitting a high hook with a sand wedge, high hook with a draw, any one of those shots. And on those greens, to be able to take some of the slope out with curve, even around the greens, spin the ball either left-to-right or right-to-left and flatten those out, it was fun. I had it right where I needed to be.

“Bethpage, a different story. I was good going into the week, unfortunately just didn’t feel well. And this week I feel like I’m trending in the right direction. I need one more day of prep. I want to see the golf course when it’s a little bit closer to game time. I know they’re holding it back. But I just want to see how much they are going to let it go and show us how it’s going to be come Thursday.”

Woods said he can still draw on some of the success he had at Pebble Beach in 2000, despite so much time having passed.

“I missed the ball in the correct spots,” Woods said. “The only real trouble I had, I just happened to catch a gust of wind and ended up making a debacle on No. 3 [a triple-bogey] in my third round.

“Other than that, you look all my angles. I did not hit every green [although he led the field]. I did not hit every fairway, but I always had the proper angle. And gave me the best chance to get up and down. I poured everything in. Hopefully I can have one of those weeks on the greens again.”

Woods begins the first round on Thursday at 5:09 p.m. (ET) with Jordan Spieth and Justin Rose.