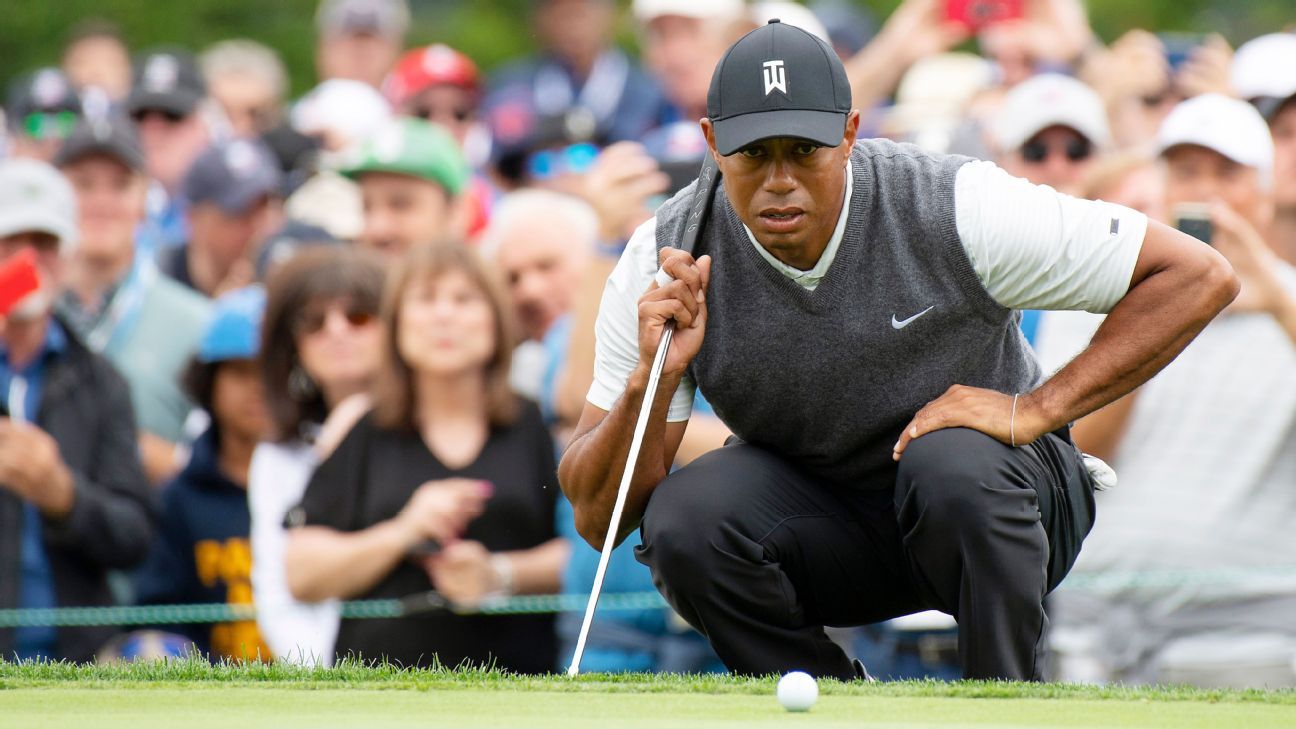 PEBBLE BEACH, Calif. — Tiger Woods had an uncharacteristically poor day with his irons Thursday during the opening round of the U.S. Open, but still managed to shoot 1-under-par 70 at Pebble Beach.

That score left him five strokes back of tournament leader Justin Rose — who played in the same group — but it could have been far worse.

Woods hit just 9 of 18 greens in regulation, sometimes leaving himself in some precarious positions. A 30-footer for par at the par-5 14th hole helped, as did several other strong par-saving putts in the round.

“I didn’t hit my irons as crisp as I’d like,” said Woods, who hit 10 of 14 fairways and took just 25 putts. “I tried to miss the ball in the correct spots, and a couple of times where I had wedges in my hand I was just dumping, center of the green, move on, get my 30-, 40-footer and move on about my business and take my medicine when I was in a bad spot and just kind of grind it out.”

Woods didn’t seem all that concerned about the poor iron play, but he had several poor ones that kept him from shooting a better score. The first came at the par-5 third, where he appeared to double cross himself, pulled the tee shot left, found a cart path, and nearly went out of bounds.

From there, Woods pitched across the green, then left his third shot above the hole and made a double-bogey — his only over-par hole of the day.

“A terrible tee shot. I was in between clubs,” Woods said. “I wasn’t committed to hit a 6-iron. I know from playing the practice rounds that I probably should hit 7 because I can hit it 15 yards short of the green, and there’s a little shelf there that will funnel the ball onto the front part of the green.

“And I hit a terrible shot, but the second shot was good. But the mistake was the third shot, and I hit it above the hole. And a simple little pitch shot, if I leave it ten feet below the hole, easy shot, move on with the bogey.”

From there, Woods birdied the par-5 sixth after a short pitch, rolled in a 20-footer for birdie at the par-3 seventh — then made 11 straight pars.

Some were after some poor iron shots. He missed the green at the ninth, 10th and 11th holes, all after hitting the fairway. At the 13th, he hit a wayward drive, but recovered from in front of the green. At the par-5 14th, after an excellent driver, Woods came up short in a bunker, then flew the green before a tough chip to 30 feet — and made it.

He didn’t have great chances at the 15th or 16th holes, missed the green short again at 17, and then was in a bunker at 18 and couldn’t get it up and down and made par.

For the day, Woods — who leads the PGA Tour in greens in regulation — was just 121st in strokes gained approach. He is 13th in that category on the PGA Tour.

“It was just hanging in there, just typical of the U.S. Open,” Woods said. “But as I said, the first seven holes you can get it going. It seemed like the majority of the guys were under par through the first seven holes, and then nobody was making hay after that. And it was a little bit tricky.”

Rose managed to shoot five shots better than Woods despite hitting the same number of greens – just nine. The 2013 U.S. Open champion who has flirted with the No. 1 ranking several times this year, birdied the last three holes and also had an eagle.

His final-hole birdie pushed him past Rickie Fowler, Xander Schauffele, Louis Oosthuizen and Aaron Wise, all of whom shot 66. Woods is in a tie for 28th.

Woods doesn’t have much time to figure it out. It is a quick turnaround, one of roughly 13 hours from when he finished to when he will tee off at 11:24 a.m. ET. And he will be starting on the 10th hole.

“Right away we’ve got a tough par 4 right from the get-go,” he said. “And we have the harder side to start off on, and hopefully I can finish up on the front side and have the full seven holes where I can get it going.”