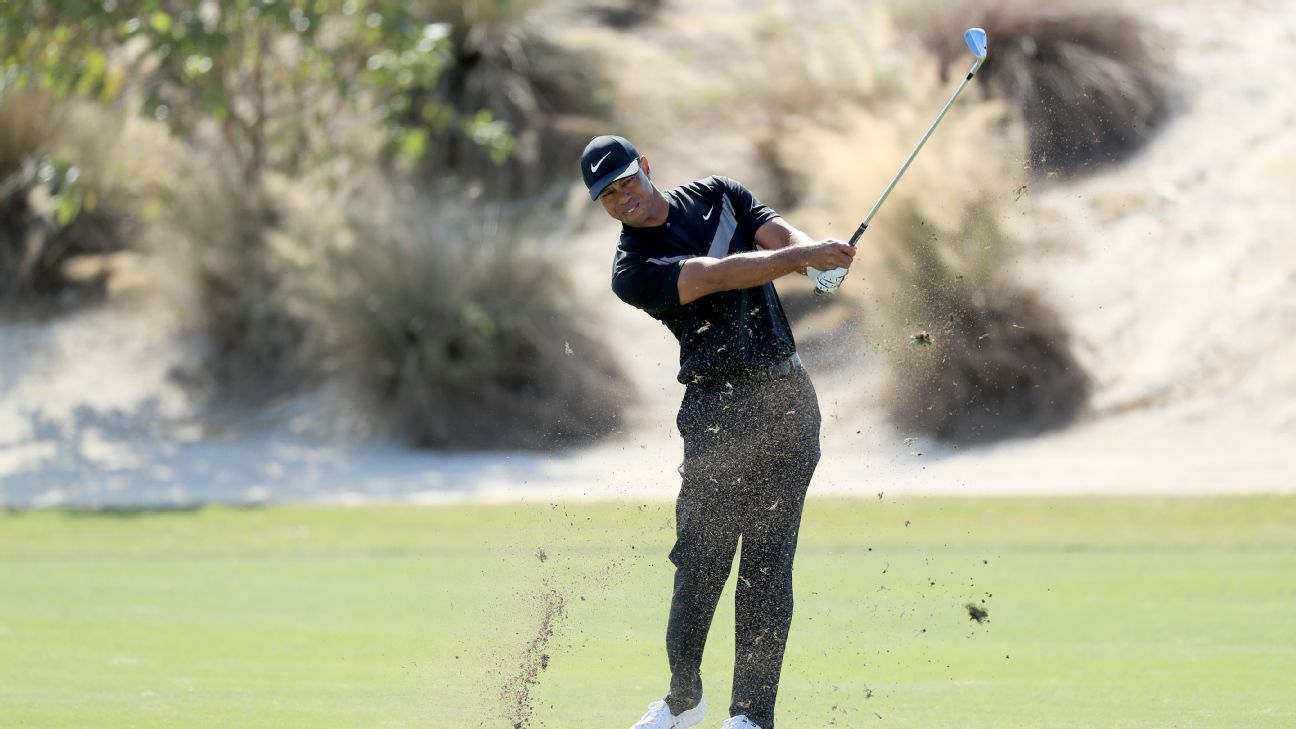 NASSAU, Bahamas — There was a light moment on Wednesday afternoon at Albany Golf Club when Tiger Woods made a point to let Justin Thomas know he had outdriven him, stopping dramatically to examine the younger golfer’s ball and then walking ahead to his own.

Woods, 44 on Dec. 30, got a kick out of upstaging his 26-year-old friend and golf rival during the opening round of the Hero World Challenge, although it was one of the few bright spots in an otherwise frustrating day for the tournament host.

A good bit of work to get himself back in the tournament was blown away on the final two holes, as Woods finished bogey-double bogey to shoot even-par 72 and finish six strokes back of leaders Patrick Reed and Gary Woodland and tied for 11th in the 18-player field.

“I didn’t putt that well today, but my short game was great and I drove it really well,” Woods said. “Just hit a couple poor iron shots that cost me a few shots. Got myself kind of right there in the mix and then bad shots on 17, 18.”

Playing for the first time since his October victory at the Zozo Championship in Japan, Woods simply appeared a bit off, not giving himself very many birdie opportunities, bogeying two par-5s and struggling on a particularly windy day in the Bahamas.

But after playing the front nine in 2 over par, he rebounded by playing a five-hole stretch in 5 under par, including chipping in for an eagle at the par-5 15th hole .That got him to 2 under par, only to give it back on the last two holes.

Woods won for the 82nd time on the PGA Tour at the Zozo event, matching the PGA Tour record held by Sam Snead. The Hero is an unofficial event, but it awards world ranking points. Woods is ranked seventh in the world.

Although Woods has won this tournament five times, he’d not fared particularly great in the 18-player field in three previous appearances. And he’s got plenty to occupy his mind this week as the tournament benefits his foundation and he will be the playing captain next week for the United States at the Presidents Cup in Australia.

To that end, Woods fielded more questions about the Presidents Cup than he did his own game.

“We have some things we need to run through the guys, some ideas,” said Woods, who is joined here by 10 of the other 11 players on the U.S. team. “I’ll pick their brains a little bit. We just want to have a clear picture of what we’re going to do down there obviously, once we got down there, things roll pretty quickly.”

Woods noted the tight schedule filled with activities once the team arrives in Australia on Monday morning, with only two full days of practice before the competition begins on Dec. 12.

It probably didn’t hurt Woods to see four of his players among the top seven, including Rickie Fowler, who hasn’t played since the Tour Championship in August. Fowler shot 69 to trail the leaders by three. Thomas is also tied for fourth along with Fowler and Justin Rose.

“The conditions today were hard,” said Reed, one of Woods’ at-large selections for the Presidents Cup. “I knew today was a day you had to play from the fairway, you had to give yourself opportunities. It was an awkward wind and we haven’t really seen that during tournament play here. The ball is just going forever downwind and into the wind the ball’s going nowhere, so it’s one of those things where you have to be patient and make putts whenever you have the opportunity.”

Reed made seven birdies and just a single bogey to shoot 66. Woodland, who won the U.S. Open this year and also got a captain’s pick from Woods, had eight birdies and two bogeys to tie Reed.

Skechers unveils 2020 golf shoe range
Demo Day 2020: Five affordable new launch monitors that are geared for the everyman
Jack at 80: Nicklaus on life, majors and refusing to slow down
PGA Show 2020: You can now rent (or own) your own robotic putting simulator unit (if you have the money)
7 new ways golf instruction is embracing artificial intelligence and innovative technology