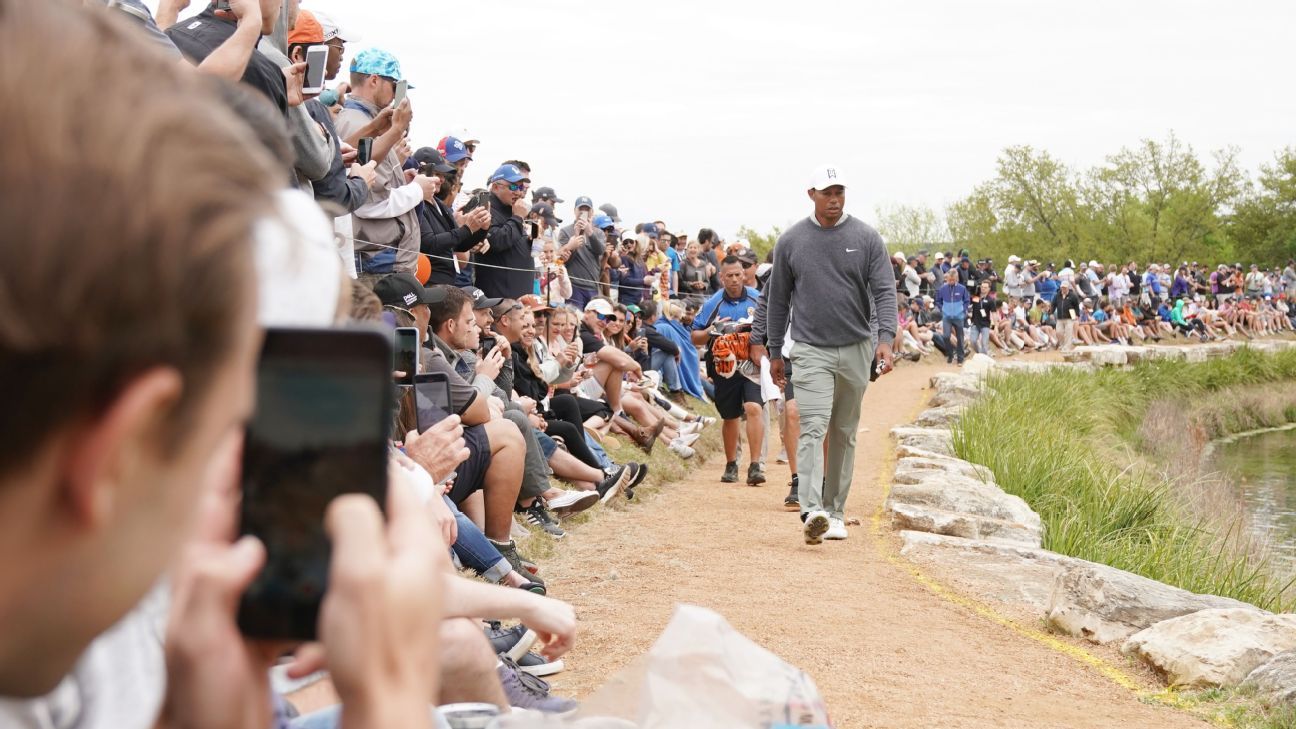 AUSTIN, Texas — The wind howled, the temperature dropped and the forecast did not look good. Temperatures topping out at 60. A hilly, quirky golf course. Two more rounds, the possibility of 36 holes.

Of course, it was cringe-worthy, a par putt that he never misses in those situations grazing the hole, an opportunity to prolong his match against Denmark’s Lucas Bjerregaard squandered.

Tiger Woods loses to Lucas Bjerregaard after missing a 4-foot putt on the 18th hole.

There were a couple of other putts that didn’t drop, too, ones that could have altered the match and had Woods pursuing an 81st PGA Tour victory on Sunday at the WGC-Dell Technologies Match Play.

But the Masters looms. Woods is 43. A bad back is real. In a perfect world, another 36 holes on Sunday means nothing. But Woods — who just a few weeks ago skipped a tournament due to a strained neck — is far from perfect these days.

Would the pursuit of victory Sunday have been worth it had it in any way impacted the waning opportunities at Augusta National?

Woods didn’t sound like a guy who wanted to nurse his way through this tournament. His competitive fire showed even 20 minutes after the match ended, hardly in a reflective mood, not looking to touch the big picture of his game coming off what still is his best tournament finish of the year.

“I wanted to play [Sunday],” he said. “This is going to sting for a couple of days and I’ll get back to it after that.”

Woods was mad. And perhaps he will be more motivated.

It is tough to envision Woods heading to Augusta National in search of a major championship without such ambition, but the Match Play event ought to offer up that extra bit of resolve.

Woods came close to reaching the semifinals, a nice achievement considering it included a victory over the game’s hottest player, Rory McIlroy, earlier in the day on Saturday. But Woods also left Austin Country Club with a couple of nagging flaws, namely those short putting misses — he missed three on Saturday afternoon from inside 6 feet — along with a perplexing inability to hit short irons close.

Tiger Woods defeats Rory McIlory on a 13-foot par putt on the 17th hole to advance to the round of 8 at the WGC-Dell Technologies Match Play.

The last was a 50-yard shot from the rough on the 18th hole that came up woefully short in a greenside bunker. Was Woods trying to be too cute? Or did he just hit a poor shot? We never got to ask him. In general, though, his wedge play has been mediocre at best and needs work before the tight fairways and scary greens of Augusta National beckon.

Although the stats at the Match Play are somewhat skewed due to the format, Woods did not rank in the top 10 in any category. Despite some booming drives, he was just 42nd (out of 64 players) in strokes gained off the tee. His best was strokes gained approach to the green, which is always his strongest attribute. But he ranked just 43rd in putting.

For the year, his most glaring statistic is his approach shots from 100 to 125 yards, where he ranks 103rd on the PGA Tour. From 125 to 150 yards, he is just 96th. Those big drives don’t do much good if you can’t hit it close with a wedge. Still, there was progress.

“I think this was a big step in the right direction, for sure,” said Woods’ caddie, Joe LaCava, of the week in general. “He got more rounds in the heat of the battle. Definitely reason to be optimistic. I think he got better each day.”

The short-term disappointment will pass, perhaps helped by a reminder of what it was like five weeks ago in Los Angeles when Woods had to play 30 holes on the final day of the Genesis Open. The temperatures were raw and windy, and Woods walked off Riviera looking like a man who had walked miles in a blizzard.

A week later he was dealing with those undisclosed neck issues, which eventually caused him to miss the Arnold Palmer Invitational?

Did he want to risk that again?

Woods sounded like he was willing to do so in pursuit of victory, but deep down he must know there is sometimes a blessing in defeat. A trip to Augusta National this week for a day of practice will help erase the bad memories.

And so will a few more putts dropping.