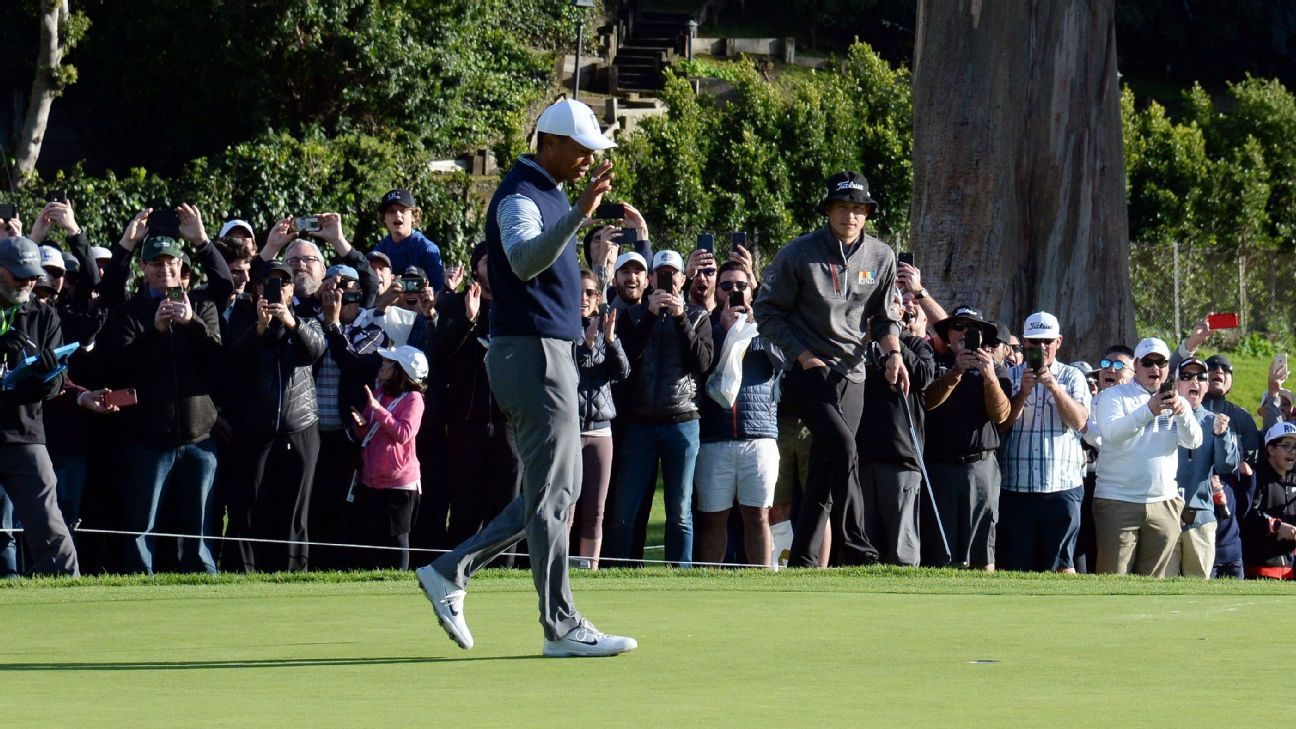 LOS ANGELES — It took him until late Saturday afternoon, but Tiger Woods finally got hot at chilly Riviera, starting the third round of the Genesis Open with five consecutive 3s, including an eagle and three birdies.

The run vaulted him from just inside the cut line to inside the top-15 as play was halted due to darkness.

Justin Thomas leads the tournament at 13 under par, but played just two holes of his third round. Adam Scott is a shot back playing in the final group with Thomas along with J.B. Holmes. Woods got to 6 under par through seven holes but will need to get up and down for a par from 30 feet at the par-5 17th.

Woods and the rest of the field will resume the third round of the weather-plagued tournament at 6:45 a.m. local time (9:45 a.m. ET) Sunday and will continue into the fourth round with hopes of completing the tournament before darkness.

The tournament host who has never won the Genesis Open in 12 previous starts, Woods, 43, seemed on the verge of missing the cut early Saturday morning when he had six holes to complete from his second round. He immediately dropped a shot at the fourth hole, his first of the day, then made a couple of shaking pars before managing to knock in a 24-foot birdie putt at the ninth.

When the round ended, Woods was 10 strokes behind leaders Justin Thomas and Adam Scott and in a tie for 52nd. Having difficulty with his putting and having hit just eight of 18 greens – and with a long day looming on Sunday – Woods was asked if he preferred two more rounds of competition over missing the cut.

“You saw what I did last year, I missed the cut here and I had to add an event,” he said. “So I’m playing the weekend and I get two more rounds to kind of get after it.”

Getting a chance to play more golf appeared to be a good thing. His struggles on the greens had continued from his first tournament of the year at the Farmers Insurance Open. At both tournaments he has played this year, the 80-time PGA Tour winner has lamented his poor putting, although for different reasons.

At Torrey Pines three weeks ago, where a final-round 67 helped him finish in a tie for 20th, Woods said he wasn’t reading putts well.

“Can’t get any worse than it was the first day; four 3-putts is as bad as a human being can putt.”

Woods clearly found something Saturday afternoon. He made a 5-footer for birdie at the short par-4 10th, stuffed a 5-wood from 250 yards to 10 feet at the 11th and made the putt, then rolled in a 20-footer at the 12th and a 10-footer at the 13th. He was 5 under par through four holes.

The streak ended at the par-3 14th, where Woods made a par to at least continue his streak of five consecutive 3s before he made two more pars at the 15th and 16th holes.

Woods, who serves as tournament host with his TGR Foundation running the event, has had an odd history at Riviera, the course closest to his boyhood Southern California home.

In 11 previous appearances here, two as an amateur, he has no victories, three missed cuts and four top-10s. Along with one year when the tournament went to Valencia Country Club, Woods has played this event the most of any in his career without a victory.