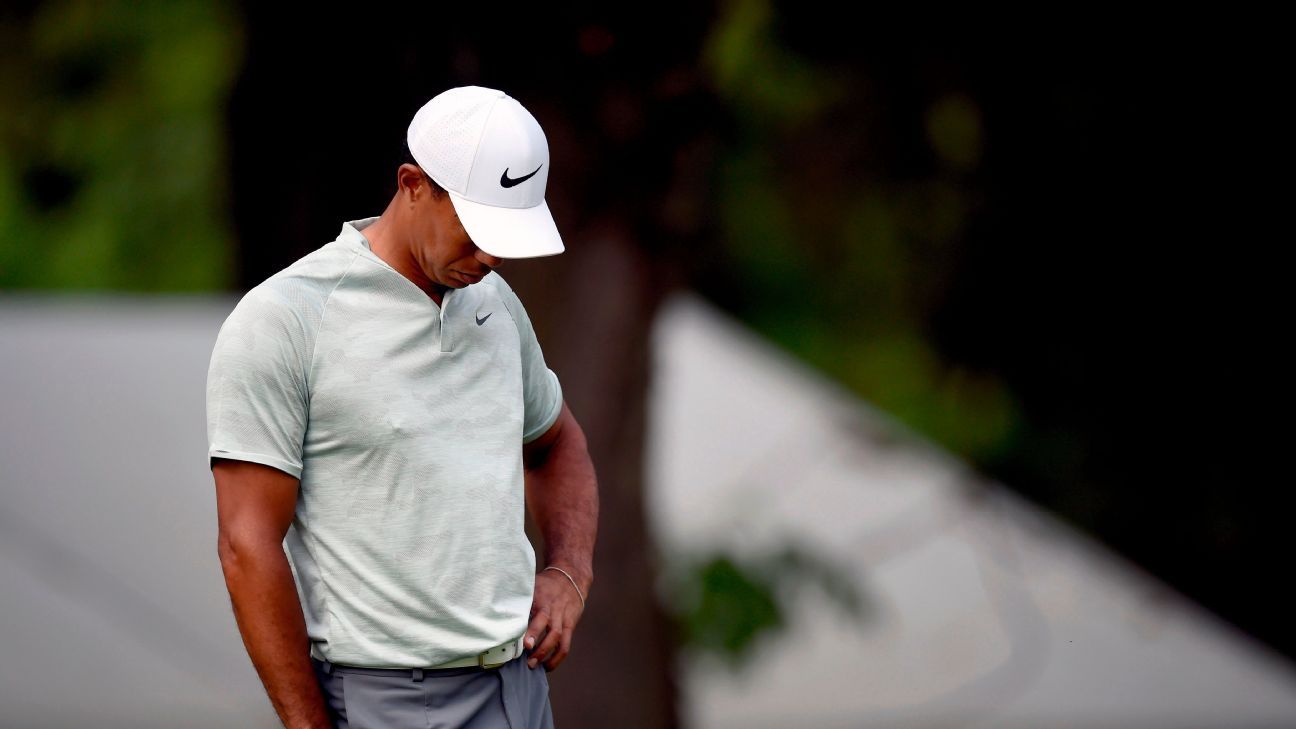 MEXICO CITY — Standing in the middle of the 15th fairway Saturday at Club de Golf Chapultepec, Tiger Woods had a realistic chance of playing his way into the final group at the WGC-Mexico Championship.

Less than 10 minutes later, he walked off the green with a stunning double-bogey 7 on the par-5 that included a 4-putt, taking away any fleeting chance at victory.

He left the course declining to speak with the media for one of the rare instances in recent times, undoubtedly stewing about what had just occurred – and also in need of a club repair person due to a damaged 9-iron earlier in the round that did not help his plight.

Woods finished with a 1-under-par 70, which looks okay until you see the final score marred by a round with two three-putts and a four-putt. After climbing as high as a tie for fourth, Woods wound up tied for ninth, a whopping 10 shots behind third-round leader Dustin Johnson.

Rory McIlroy is four shots back in second place, with Patrick Reed, Sergio Garcia and Patrick Cantlay tied for third. Woods trails that trio by just three shots at 207, 6 under par.

It was just the 12th time in Woods’ career as a pro on the PGA Tour that he four-putted a green. The first came in 1996 at the Quad Cities Open. He also had one last year during the first round of the U.S. Open at Shinnecock Hills.

Left with 247 yards, Woods had a 5-iron that came up short of the green and in a bunker, leading to a poor shot and a 25-footer for birdie.

“Very shocking,” said Woods’ caddie, Joe LaCava, of the situation. “Shocking because the bunker shot is pretty straight forward. He was in between a little bit and almost too many options (on the bunker shot). But as soon as you get above the hole from three feet on these greens, it isn’t easy.”

Woods left himself a par putt of just under four feet, relatively routine for him, but he knocked it past the hole, just over two feet. And he missed that one for bogey, settling for a devastating double-bogey 7. It was his second double of the week.

“His whole day changed on one swing,” said NBC analyst Paul Azinger. “The 5-iron from the middle of the fairway on 15 into that right bunker left him a tricky bunker shot. He didn’t hit a good one. Four putts later, he’s the only double bogey on the easiest hole on the course.”

On the 16th hole, Woods ran into trouble due to the 9-iron he had damaged earlier in the round when trying to play a shot from behind a tree. The club struck the tree on the eighth hole, and Woods could be seen examining the club.

The rules do not allow you to replace the club, only repair it but Woods apparently was unable to fix it and chose not to use it the rest of the way. Under the new rules implemented this year, he would have been allowed to use a damaged club without penalty.

Sure enough, the 16th was a time he could have used the 9-iron.

Woods’ approach to the 16th was on the green, but he left himself a 40-footer and three-putted that. It was the first time in his career that he had consecutive holes with a 4-putt and 3-putt.

He did manage to salvage an under-par score by birdieing the 18th hole.

Last week at the Genesis Open, Woods called it one of the worst putting tournaments of his career as he had six three-putts. He has five so far this week and still ranks a respectable 22nd in the field in strokes gained putting.

Making the score of 70 even more aggravating for him is the fact that he hit 16 greens in regulation. He needed 35 putts, tied for the most of any player in the field.

With a solid final round, Woods can still salvage a high finish in the tournament.

“He’s going in the right direction,” LaCava said. “I’ve seen plenty of good stuff, too. Once he gets going with the putter or gets hot we’ll be on our way.”

Since back surgery in 2017 and beginning his comeback on the PGA Tour in January of 2018, Woods has now played 79 official rounds. This was just the second time he declined to speak afterward. His only such instance in 2018 was after the final round of the Dell Technologies Championship.