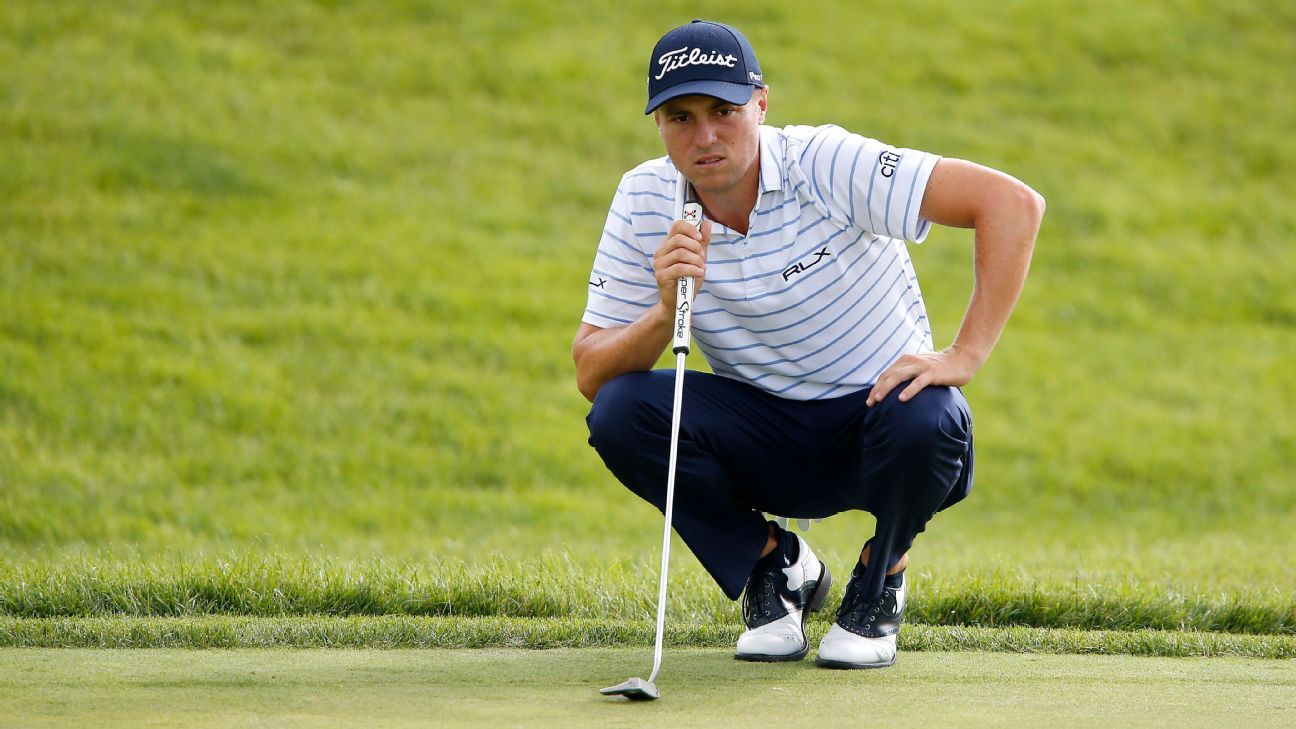 DUBLIN, Ohio — Justin Thomas never looked to be in a hurry.

Not when he stepped to the first tee Friday trailing by 13 shots. Not when he was simply trying to keep up with Collin Morikawa on Saturday in the Workday Charity Open.

And after turning a three-shot deficit into a two-shot lead with another clean card, he certainly didn’t see any need to sprint to the finish at Muirfield Village as he goes after his third victory this season.

“Just going to keep trying to hit the fairways and hit the greens and make as many birdies as I can,” he said.

That’s been the philosophy all week, and along the way, he has managed to keep bogeys off his card. There were a few dicey moments, such as a pair of two-putt pars from over 50 feet, and a shot that stuck in the grass high on the lip of a bunker on par-3 12th.

Otherwise, it’s been a clinic.

Thomas had three consecutive birdies to stay in range of Morikawa. And when Morikawa fell back with three bogeys over a four-hole stretch around the turn, Thomas made efficient birdies on the par-5s and a smart birdie on the reachable 14th for a 6-under 66 to keep two ahead of Viktor Hovland (66).

After a delicate chip to tap-in range on the par-5 fifth, Thomas walked halfway up the hill behind the green and plopped down in the grass, leaning back on his hands, much like a spectator at a tournament that has none amid the coronavirus pandemic.

Too bad there won’t be any fans Sunday, a final round that offers another glimpse of the new generation.

Thomas is the proven star, already a major champion and former world No. 1 at age 27 as he goes after his third win this season and the 13th of his career.

Hovland and Morikawa had just left college at this time last year and already have victories, albeit the opposite-field variety the same week as World Golf Championships.

Hovland, the former U.S. Amateur champion from Norway, had eight birdies in his round of 66. Morikawa, who never looks as though he’ll make a mistake, made enough of them that he needed a birdie on his last hole for a 72.

Because of an early start to avoid storms, they will be in the final group Sunday. Thomas figures it won’t be the last time they all play together.

“It’ll be fun to hang with those guys tomorrow, but at the end of the day I’m worried about myself and trying to win a golf tournament and have a good round,” he said.

Morikawa had the lead for 31 straight holes, dating to the 15th hole in the opening round, until missing the ninth green with a short iron, hitting a wild tee shot on the 10th that led to bogey, and sending his tee shot on the par-3 12th well over the green into such a bad spot that even making bogey was hard work.

“I put myself in spots you couldn’t put yourself in,” Morikawa said. “Couldn’t really figure out wind directions, how much to adjust. But whole new day tomorrow, and kind of glad I fought it out through even par got myself three back. So that can change really quickly tomorrow.”

Hovland, who won the Puerto Rico Open this year, got back in the game quickly by opening with a pair of birdies at the start and making birdie on all the par-5s. He also took on the 14th hole, where the tees have been moved up for this tournament to play at 310 yards — reachable from the tee, but with bunkers left and water to the right. He hit his tee shot to 30 feet for a two-putt birdie.

Hovland was thrilled to be in this position, especially with how his week started. He was 3 over through 10 holes on Thursday and finished with six birdies over his final eight holes. He followed with rounds of 67-66.

The biggest surprise was MJ Daffue, a 31-year-old from South Africa who played college golf at Lamar and has been struggling to make it as a pro. He was a Monday qualifier for the Workday Charity Open, getting into only his second PGA Tour event. He had to birdie his final hole Saturday morning to make the cut. And then he made an 18-foot eagle putt late in his round of 65, the best score Saturday. He was seven shots behind.

“There was times today where I had to grind out a par and my caddie kept telling me we were one swing away from not having a grind at all,” Daffue said. “It’s been pretty crazy.”

He was seven shots behind and loving every minute of his time around the course Jack Nicklaus built.

The tour needs this tournament to end before the forecast weather hits. The course is to be closed on Monday to replace all the signage and remove the 10 electronic scoreboards for the Memorial, which begins Thursday.

It’s the first time in 63 years the PGA Tour has had back-to-back tournaments on the same course.