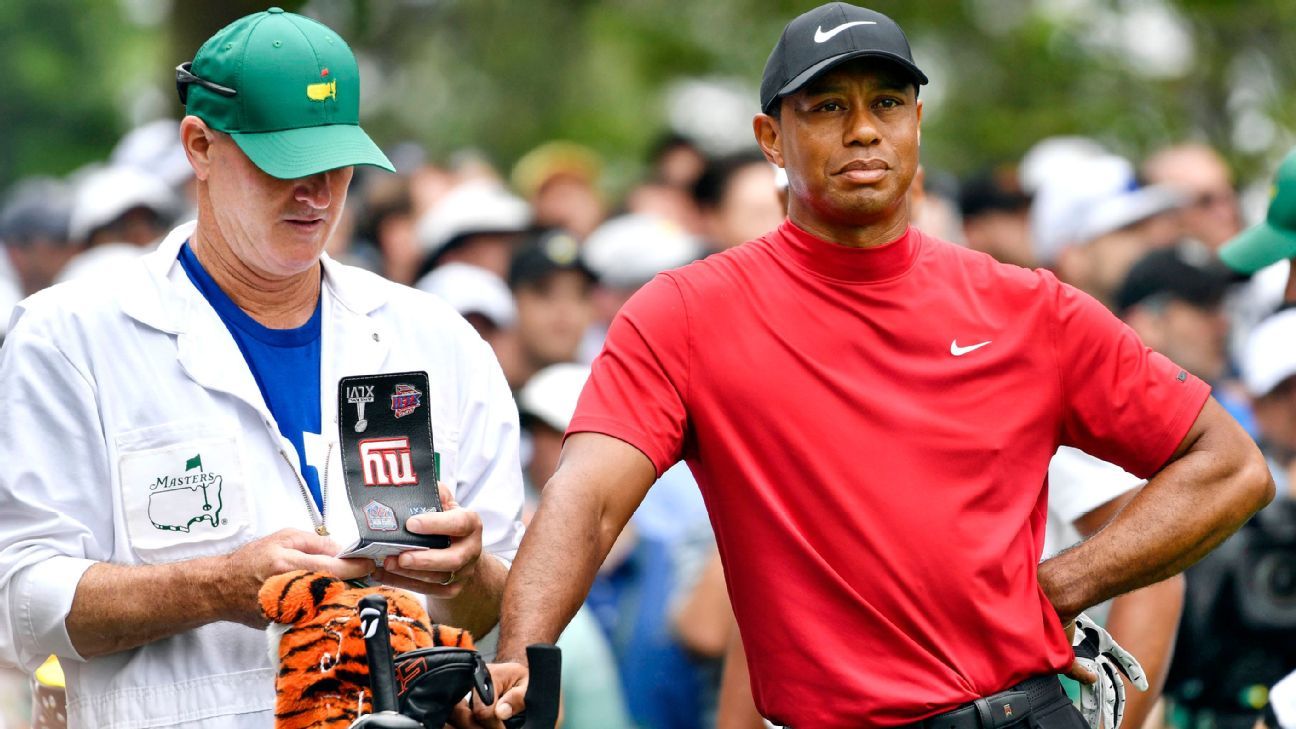 AUGUSTA, Ga. — An impromptu celebration broke out Sunday afternoon on the Augusta National putting green, with Tiger Woods taking a Masters victory lap after being presented the green jacket by 2018 champion Patrick Reed.

As the masses cheered on Woods, then migrated with him as he left the green, Reed found himself caught up in the frenzy, trying to make his way toward the clubhouse when dozens upon hundreds of fans were streaming the other way.

Wearing his own green jacket and a yellow tie, Reed got swallowed up in the hysteria, all but run over — a shared feeling of others in the aftermath of Woods’ historic victory.

It was his 81st PGA Tour title, 15th major and fifth Masters. So naturally, it is fair to wonder what is next.

“I felt the hardest part for him was going to be the next one, to get to that 15 [major] mark,” Reed said. “Because [his last major victory] was a long time ago. First, it was ‘Can he get to the winner’s circle?’ Well, he checked that off at East Lake [where he won the 2018 Tour Championship.]

“Then it’s, ‘OK, he just needs to get that one [major] to get that taste again.’ For him to get another one like he did, having everyone bunched on the leaderboard like that, I’d be shocked if he wasn’t knocking on that door for 19.”

That might be getting a bit ahead of ourselves, but it is interesting that such a notion is even in the conversation, that Jack Nicklaus’ record of 18 major titles is even in play.

Because for so long it was not. Not after multiple injuries, swing issues, confidence woes and an 11-year period without a major championship.

Who would have dreamed it possible? Not Woods two years ago, when he was about to undergo spinal fusion surgery that would change his life and career. Certainly not a growing horde of naysayers, who figured his major-winning days were behind him even before back problems surfaced as Woods struggled despite being No. 1 in the world for the better part of 2013.

Woods had finally failed to convert a 54-hole lead in a major into victory at the 2009 PGA Championship. He had six top-six finishes over the next 14 majors that he played, his best a tie for third at the 2012 Open. Just two shots behind a year later at Muirfield, Woods tied for sixth — the sixth time in his career he was within two shots of the lead entering the final round of a major without winning.

The first back surgery in 2014 knocked Woods out of the Masters and U.S. Open, but he wasn’t a factor in any of the next six majors he played, missing four cuts.

Fellow players certainly had their doubts, watching Woods endure a case of the chipping yips in 2015, missing three cuts in majors that year, and then an aborted comeback in late 2016 and 2017.

And then there was the wait after surgery, the unknown, Woods saying, “I don’t know what my future holds.”

But Rob McNamara never doubted. A vice president with Woods’ TGR Ventures, McNamara has worked for Woods since 2000 and has become a trusted confidant as the golfer plays without a coach.

“I’ve always been an eternal optimist,” McNamara said outside the Augusta clubhouse Sunday. “Even before the surgery, I thought if he’s standing on two legs, he’s still Tiger Woods. He was the best guy with a different swing and a different body at [age] 5 , at 10, at 15, at 20. So why not 43 with a bad back? In my mind, I was always optimistic. I know the reality of getting it done is pretty surreal.”

McNamara played with Woods at Augusta National on April 3, the Wednesday prior to tournament week and a few days after his quarterfinal loss at the WGC-Dell Technologies Match Play. Woods shot a 65 that day — with a three-putt bogey on the first hole.

Then they returned to Augusta on April 7, late in the afternoon after most had left the course. Woods, McNamara and Joe LaCava, Woods’ caddie, headed to the first tee, where Woods took with him just a wedge and a putter.

“Ballstriking-wise, he was way ahead of where he was last year coming into these last couple of months,” McNamara said. “All year he’s driven the ball and really struck the ball extremely well. It was just scoring. Short game and putting. I started to see a change once he started pitching it really close and tight. That was some of that work on Sunday night. Just taking a wedge around. He knew it was about pitches and chips and controlling your distance and your speed and your spin. He started getting dialed in and had a nice feel. I think that carried him through.”

Woods ranked just 47th in driving accuracy for the weekend, but he led the field in greens in regulation — he has been first or second in all five of his victories — hitting 58 of 72 greens. Woods made nine bogeys, two three-putting and seven times failing to get up and down for par.

But hitting all those greens was key, as Woods made 22 birdies, including six in the final round.

“I just felt so prepared coming into this event,” Woods said. “This year, my finishes don’t really reflect it [nothing better than a tie for 10th in four stroke play events], but I was starting to shape the ball the way that I know I can, which I needed for this week.

“Prep for the Masters started six months ago, so just trying to make sure I get ready to peak for this one week and I did, and everything came together, which is great.”

Can he peak again this year at the remaining majors? The process for Woods to get ready to play each day and each tournament is daunting. There are some early wake-up calls, with a stretching and cardio routine that sometimes involves therapy to get prepared. On off weeks, Woods can’t pound hundreds of balls per day. He needs the proper mix of practice and tournament preparation to get it all right.

Now sixth in the world and 13th in the FedEx Cup standings, Woods has made worrying about qualifying for the season-ending FedEx Cup playoff events less of an issue. He reiterated he will play less than he did last year — a total of 20 times worldwide, 18 on the PGA Tour.

An educated guess has him playing at the Wells Fargo Championship later this month, followed by every-other-week events at the PGA Championship, Memorial Tournament and U.S. Open. It is possible Woods does not play again after that until The Open at Royal Portrush, followed by a hectic run to the end of the season that includes the WGC-FedEx St. Jude following The Open and then three playoff events in August.

For now, the next push will be for an 82nd PGA Tour victory and matching Sam Snead’s record. The PGA Tour plans a marketing campaign surrounding that pursuit.

But in the back of the mind will be the major chase of Nicklaus’ record, revived again even if still a daunting task.