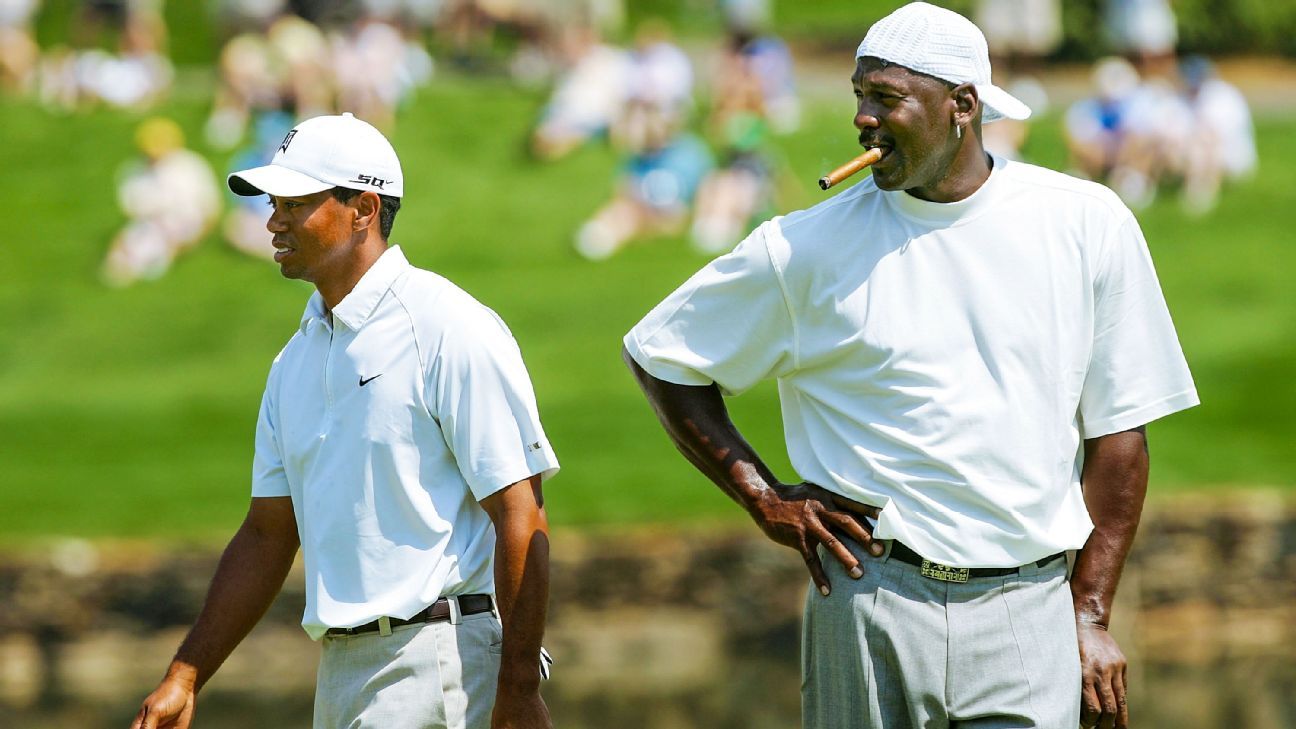 Tiger Woods and Phil Mickelson have always made it clear this new partnership in made-for-TV matches would not be a one-time thing. On Sunday, they gave us the second installment, adding Tom Brady and Peyton Manning to the mix for The Match: Champions for Charity, which raised $20 million for coronavirus relief.

A few times this week, Mickelson has floated some more ideas, most notably to the Los Angeles Times and the Dan Patrick Show. But who might be next? Who would we want to see tee it up with and/or against Tiger and Phil. We asked around and got some interesting responses, including the ultimate match. (Hint, think Michael Jordan and Charles Barkley).

Here’s what we came up with:

Ian O’Connor, ESPN.com
Tiger Woods/Charles Barkley vs. Phil Mickelson/Michael Jordan
I might have gone with Brady and Belichick before Peyton Manning stole my Belichick thunder Sunday, but Jordan and Barkley would bring a ton of starpower and tension to the table. It might take some convincing of MJ, since he apparently is no longer on speaking terms with his ex-good friend Chuck. But that strange dynamic would only add to the spectacle. Phil would loosen up Jordan, and Barkley would loosen up Tiger. Barkley would need a bunch of strokes to make this work, since he makes Brady seem like Ben Hogan. But coming off his “Last Dance” tour de force, Jordan would be feeling a lot of pressure on that first tee, as it’s been a long time since he’s competed live with millions watching his every move. Can he keep it on the planet with Barkley needling him about his past big-money golf losses and a winning percentage, as an executive, that’s not in Jerry Krause’s ballpark? A lot of people would tune in to find out.

Tom VanHaaren, ESPN.com
Tiger Woods/Michael Jordan vs. Phil Mickelson/Steph Curry
I would’ve stuck with the rivalry theme and put Michael Jordan against Isiah Thomas, but we all know now that Michael Jordan wouldn’t have played if Isiah Thomas was invited. I’ll see myself out. In all seriousness, the golf would be fun to watch, the trash talking would be outstanding and having Jordan and Mickelson on opposite teams means we also might get some added excitement from side bets. This match would have the star power needed to draw a big audience, and while it isn’t a rivalry, it would combine the old-school NBA with the new-school in a fun competition. To follow up the success of the Brady-Manning match, you would need to go over the top and this matchup would check all the boxes to make for entertaining TV.

Bob Harig, ESPN.com
Tiger Woods/Phil Mickelson vs. Rory McIlroy/Justin Thomas
There are numerous ways this can go, but I like the idea of a pure golf competition with two of the game’s legends against two of the game’s young stars. And this time, let a Tiger-Phil pairing be a positive instead of a negative, as it was all those years ago during the Ryder Cup. To spice it up, make the competition true alternate shot or foursomes, not the modified version employed in the match with Peyton Manning and Tom Brady. Having to play your partners’ foul balls makes for a really stressful way to play golf and can lead to some interesting scenarios. Based on the way he handled his role as an on-course commentator, you can bet that Justin Thomas will fully embrace the the trash-talking spirit. And given McIlroy’s driving prowess, it could make for a really interesting and competitive matchup. As for a location, how about Bandon Dunes to make for an impressive backdrop?

Charlotte Gibson, ESPN.com
Tiger Woods/Annika Sorenstam vs. Phil Mickelson/Karrie Webb
Why should the men have all the fun? Seriously, if we’re even entertaining the idea of Match III, this time women better be involved. Of course, it would be phenomenal to watch Woods and Mickelson tee it up with the likes of Michael Jordan and Steph Curry, but wouldn’t it be equally as phenomenal to see them tee it up with two Hall of Famers with a combined 113 LPGA Tour titles? This time, let’s leave it up to the two biggest rivalries in golf both past and present. Sorenstam and Webb have one of the best LPGA rivalries that dates back to the mid-1990s.

Who else has that type of history? Woods and Lefty. The parallels in their careers are uncanny. And yes, I know that Sorenstam officially retired in 2008, and Webb took a break from golf for a few years before returning back to the Tour last year. But, the world hasn’t witnessed a co-ed pairing like this since 2001 when Woods and Sorenstam started their storied friendship while playing the Battle at Bighorn, a made-for-TV event, that also featured David Duval and Karrie Webb. We’re long overdue for men and women to face off on the course in a big, made-for-TV event — and why not do it with some golf legends?

Michael Eaves, ESPN
Tiger Woods/Matt Damon vs. Phil Mickelson/Will Smith
If you’ve ever spent any time on their Instagram pages, you would know that Phil and Will would make a natural pairing. Plus, they are two of the biggest stars in their respective fields, who have cashed in on their fame and performances like few others, despite a few flops on the biggest stages.

On the other side, Matt could bring a little something to the match that Tiger has clearly been reluctant to do in front of the cameras: NSFW trash-talking! Those who have played privately with Tiger tell tremendous tales of his R-rated commentary, so with Matt as his partner, he can leave the f-bombs to the South Boston native.

And lastly, most importantly, Smith and Damon could make up for the utter disappointment that was “The Legend of Bagger Vance.”

Mark Schlabach, ESPN.com
Tiger Woods/Michael Jordan vs. Scottie Pippen/Phil Mickelson
They could call it the “Last Match” because either Jordan or Pippen probably wouldn’t make it to the 18th hole in one piece, given what was said during “The Last Dance.” The trash talking would be epic. Like MJ, Pippen is an avid golfer. Jordan gave him his first set of clubs as a Bulls rookie so he could take his money on the course. Pippen and Phil are used to playing in the shadows of MJ and Tiger, so the matchup makes sense. With Phil and Jordan in the foursome, there would be some serious cash being thrown around, which would make it mighty interesting. If Pippen won’t play, I’d settle for Isaiah Thomas and Phil.

Nick Pietruszkiewicz, ESPN.com
Tiger Woods/Chris Paul/Larry Fitzgerald/Mike Trout/Lexi Thompson vs. Phil Mickelson/Steph Curry/Patrick Mahomes/Justin Verlander/Danielle Kang
Hey, there are no rules here. So why not make it a one-day, Ryder Cup-style event? The Tiger/Phil Cup? Play three, six-hole rotations of best-ball, alternate shot and singles. Look at those names … think they won’t have some fun? And all of them can play, too. Also, none of them are all that shy, so the trash talk should be strong.