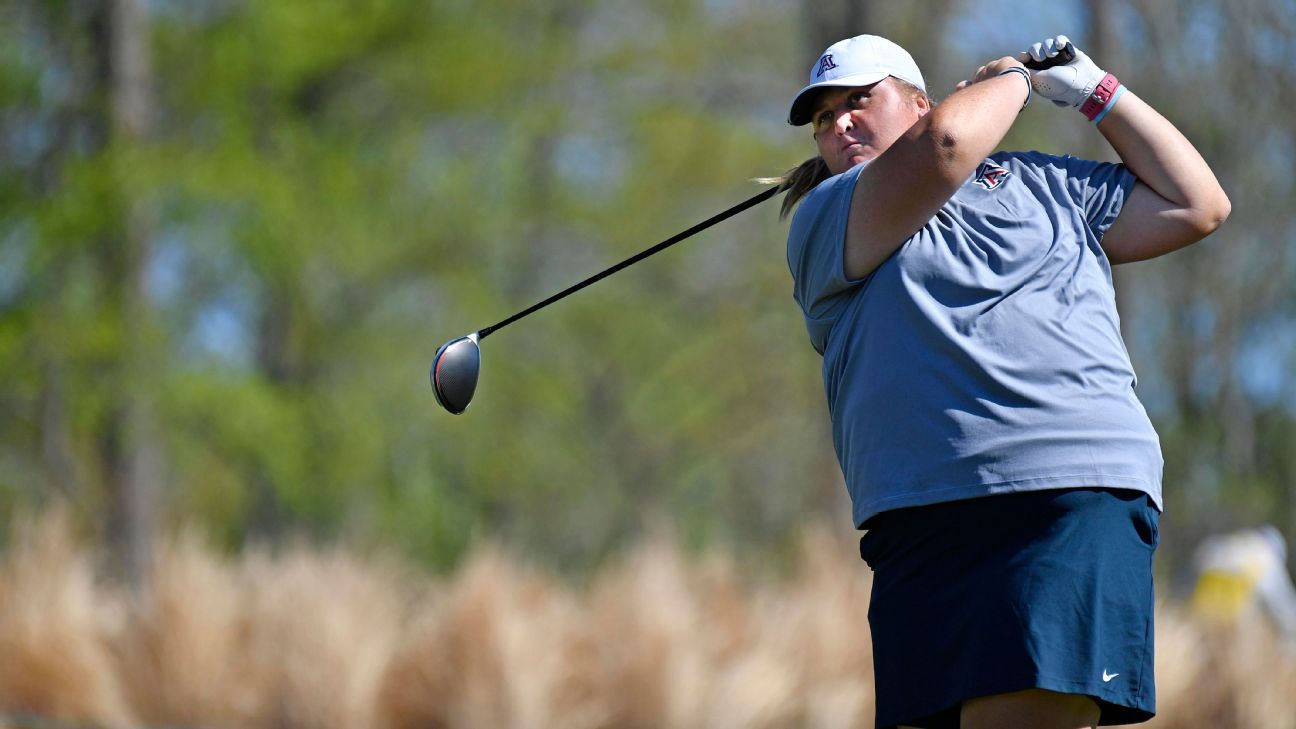 Haley Moore had been waiting three months to start her professional career. It was the first week of February, and the time had finally come. Moore, 21, was finally teeing it up as a member of the LPGA Tour at the third tournament of the season, the ISPS Handa Vic Open in Australia.

In November, the University of Arizona standout qualified for the LPGA Tour after placing 11th at the 2019 Q-Series. Since elementary school, Moore had dreamed about playing on the tour. Now, she could finally call herself a rookie.

In the first round of her professional debut, Moore shot 6-under 66 and was on top of the leaderboard.

“Suddenly, I was all over TV and in print media as one of the leaders,” Moore recalled.

But, by the end of the third round, Moore missed the cut — the event had cuts after both the second and third rounds — by one shot. She told herself that it was just the beginning, and the next tournament was right around the corner.

After Australia, Moore traveled back to her home in California to prepare for the first of nine events before the U.S. Women’s Open in June. At that time, the LPGA had canceled three tournaments in Asia out of safety concerns over COVID-19. But Moore wanted to remain positive and focus on her next tournament, the Volvik Founders Cup in Arizona.

“The LPGA issued a statement at the beginning of March and said there would be no interruption to their current U.S. schedule of events. I was relieved,” Moore said. “I made my way over to Phoenix to practice and get ready for the Founders Cup. Then, I looked at the news on my phone during practice and saw that the event was postponed. I packed my bags and went home. Then the Kia Classic was postponed. The ANA Inspiration was postponed. Event after event now postponed or canceled. This was never part of my master plan.”

For the 19 rookies who qualified for the 2020 LPGA Tour, a season riddled with postponements and cancellations due to the coronavirus pandemic was never in anyone’s master plan. Many of the rookies who competed at the fourth tournament of the season, the ISPS Handa Women’s Australian Open, thought that was just the beginning of a full year of competition.

Now, 166 days after the last time the LPGA teed it up, the 2020 season resumes with back-to-back events in Toledo, Ohio, starting Friday with the inaugural LPGA Drive On Championship at Inverness Club. This week, 16 of those 19 rookies will tee it up for the second phase of their initial season.

For Moore and fellow rookies Jillian Hollis, Patty Tavatanakit, Andrea Lee and Albane Valenzuela, this season has been unprecedented. But each tried to make the most of their time away from the LPGA Tour.

When Moore found out the season was being put on hold because of COVID-19, she knew she would need to find a way to still compete and remain tournament-ready.

Fortunately for Moore and other pros, the Cactus Tour — a professional women’s mini-tour in the Southwest run by Mike Brown — was still staging tournaments. Moore was familiar with the Cactus Tour and had competed on it in preparation for the LPGA Q-Series. Although holding the tournaments was criticized by many, the Cactus Tour followed safety protocols set in place by the state of Arizona and allowed players like Moore to compete for money and stay tournament-ready.

“Even though I didn’t have a definite ‘back to work’ date, I wanted to keep my game sharp, so I entered tournaments on the Cactus Tour,” Moore said. “The first month and a half, we were getting really criticized about playing. But, the tour director [Brown] made sure we were practicing safe protocols, social distancing, doing everything in a safe manner. We were all just wanting to keep playing because we didn’t know when the LPGA was going to start up again.”

Moore competed in 11 tournaments on the mini-tour and won three of them. After those three wins, Moore said she feels more confident and prepared for the LPGA restart.

“The last win felt very, very good,” Moore said. “Pretty much everything was just as spot on as can be, and I just want to keep having that momentum going into this week and next week. The goal for these events is just to go out there and just keep the good play going that I’ve been having, and then for the future, just try to play as much as I can and try to earn some money.”

For Moore, playing in tournaments was critical to feeling ready for whenever the LPGA started up again. For former Symetra Tour and collegiate golf standouts Hollis and Tavatanakit, the break allowed them to hit the refresh button and reset their games — something neither have had the opportunity to do in years.

“It’s been a nice mental break. I’ve never had a summer like this off before,” Hollis said. “We’re always traveling in the summer and we’re always saying no to everything because of what we do, playing and everything. I’ve used the most of it, all this time off.”

Hollis, who spent the tour shutdown in Atlanta, said she feels more prepared than ever to take on the second phase of her rookie season.

“I learned in this time off that there’s more to life than playing golf all the time, talking about golf,” she said. “There are other things in life than golf. I’ve had tremendous support during this time, and it’s allowed me to just realize that I can make deeper connections beyond just golf. I’m super happy right now.”

Hollis said her goals haven’t changed — she’s prioritizing her safety and the safety of others above all else and realizing that she can focus only on the present.

“My No. 1 goal right now is to not get coronavirus,” Hollis said. “To be as safe as I can be and to not put anybody else at risk. I feel very safe competing this week. And I’m still trying to win out here and trying to get better every week. It’s a lot mentally to put through your head. I can only focus on what’s going on right now. So, I think just keeping a level head is going to be a main goal for the rest of the season.”

Former UCLA player Tavatanakit spent her quarantine in Orlando, Florida, and that allowed her to play golf nearly every day. But the break also allowed her to hit reset on the mental and physical aspects of her game.

“It was a blessing for me to stay in Florida,” Tavatanakit, a native of Thailand, said. “It was great to be able to be out here and still play golf and have all the accessibility to courses and other resources to still succeed. It was a good reset to work on my game and to work on things that I wouldn’t have had the chance to when I was on the road. It was a really good break to get my game to where it needed to be for this return to the LPGA Tour. I just feel really blessed that I was able to use this time and spend it here.”

Former Stanford stars Lee and Valenzuela decided to return to their family homes when the tour was postponed. But the time away from the LPGA Tour didn’t just involve spending time with family, practicing golf and preparing for the return of tournament play. It also meant finishing their education and graduating from Stanford.

Both Lee and Valenzuela decided to forgo their final semester of college golf to turn professional, after earning their LPGA status at Q-Series last November. And both were prepared to take on the challenges that came with juggling a rookie season on tour and finishing college courses to earn their degrees. When the pandemic hit, everything changed — including their plans for graduation.

“It was really emotional. Stanford has been literally the best years of my life,” said Lee, who quarantined at home in Hermosa Beach, California. “I was watching the virtual graduation ceremony with my parents, and it was anticlimactic. It was only 30 minutes long. I was sitting with my parents, watching this thing, and when it ended, I was like, ‘That’s it? The end of my Stanford career?’ I just sat there and cried for a little bit.”

When Valenzuela turned professional in November, she questioned whether she would have been able to attend an in-person commencement because of the LPGA Tour. Once the pandemic hit and Valenzuela returned home to the Bahamas (where her family has resided for the past two years), she knew her final months as a Stanford student would be unlike any other.

“We tried to make the virtual commencement somewhat fun, but the reality of it is nothing will replace a real commencement. It just doesn’t give you the right closure,” Valenzuela said. “It was definitely a little bit different. But, for me, the most important thing was really just getting my degree. I graduated from Stanford, and I managed to accomplish everything I wanted to academically.”

Graduating also took some pressure off of Valenzuela, she said.

“Now, knowing that I’m on tour and I don’t have to think about it anymore, I think it’s such a great relief and really gives me a lot of peace of mind knowing that I’m a Stanford graduate,” Valenzuela said. “I can really focus on golf full time. I’m going to try and make the most of this opportunity to play again.”

Lee, a record nine-time winner at Stanford, said she also tried to focus on her game during her quarantine. In the first few weeks that the tour shut down, Lee took some time off from golf before getting back to the basics and refocusing her goals after graduation.

“The first couple of weeks when it all started, I really took everything off. I didn’t touch a club for a little bit,” Lee said. “It was nice to have a little break, but obviously, I really wanted to get back out there and compete as soon as possible. So, when courses started opening up again in L.A. County, I took every opportunity to get out there. This time off has really given me a chance to sit down and really think what do I need to do to prepare for the rest of the season.”

With so many uncertainties flooding their rookie seasons, the one thing Moore, Hollis, Tavatankit, Lee and Valenzuela can all agree on is their excitement to play in the LPGA and to carry out any lessons they might’ve learned during this break. Above all else, they know they are part of a rookie class that will be forever remembered on the tour.

“I think when I’m an old grandma, I’ll tell my grandkids, ‘My rookie year was during COVID,'” Valenzuela said jokingly. “That’ll be in the history books.”