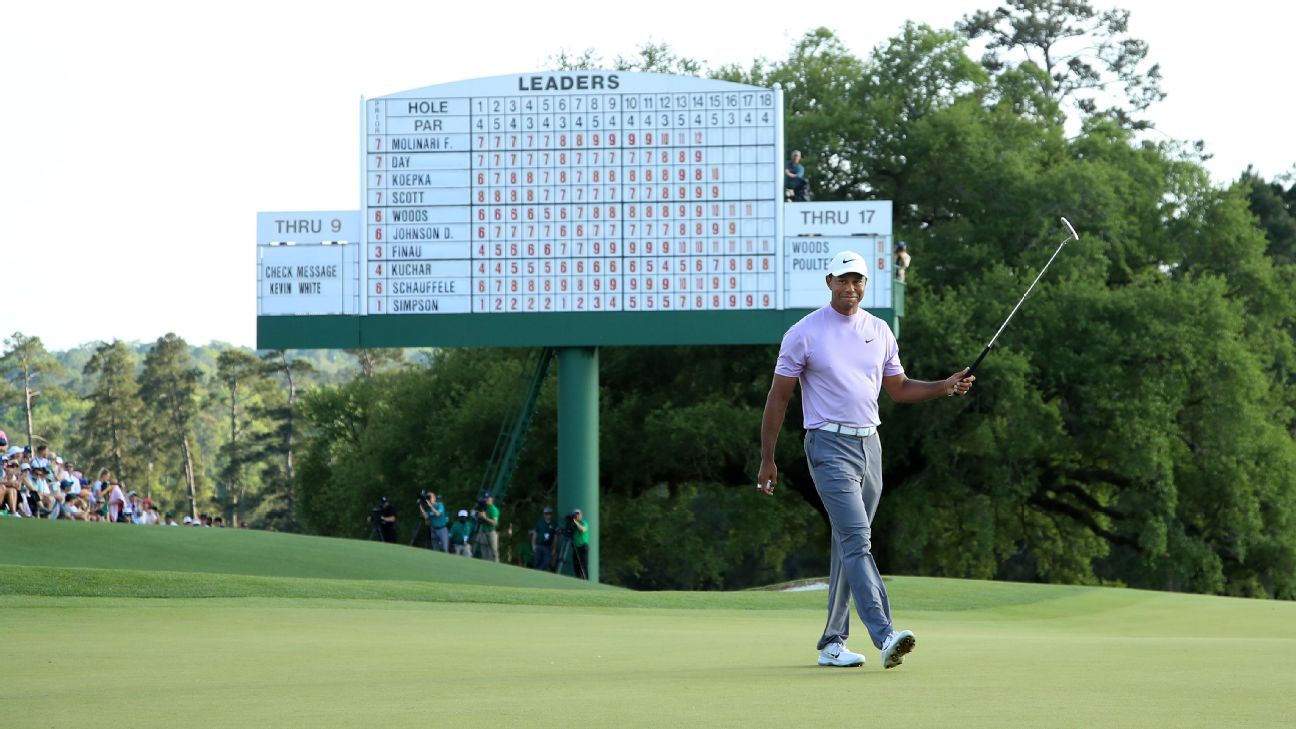 AUGUSTA, Ga. — Breakfast with Tiger. Breakfast at Augusta. Set the alarm on your phone, and back it up with the kind of buzzer on your grandmother’s clock that could rouse the most sleep-deprived recreational golfer from a coma-like slumber.

Tiger Woods will wake up Sunday morning way before you do. He is 43 years old, a weathered veteran of more surgeries on his back and left knee than he could count. Woods is a notoriously light sleeper, and these days his creaky body needs hours of prep work before he even thinks of heading to the course and driving down Magnolia Lane.

If you are inclined to care about an extraordinary performer on an extraordinary stage under extraordinary circumstances, do not miss a minute of this. Rise and shine, make the coffee, do your own prep work by watching lesser golfers in threesomes go off split tees at 7:30 a.m. ET. Then behold what could be the most surreal scene in Masters history.

Woods teeing off among the leaders at 9:20 a.m., trying to win his first Masters title in 14 years and his first major championship in more than a decade before grabbing a late lunch.

“The reward for playing hard and doing all the things correctly — you get a nice little sleep come Sunday,” said Woods, who finished the third round at 11-under, two shots behind a man who’s had his number, Francesco Molinari. “But that’s not going to be the case. We’ve got to get up early and get after it.”

So does every golf fan in creation. Woods held the Sunday lead at last year’s Open Championship before Molinari beat him head-to-head. Woods then chased down everyone except Brooks Koepka at the PGA Championship. Tiger is fully capable of winning his fifth green jacket, and then matching Jack Nicklaus‘ record of six somewhere down the road.

But at his age, Woods isn’t interested in peering too deep into the future.

So is the fact that Woods has never won a major without at least a share of the 54-hole lead. Then again, he’s never chased his 15th major title by starting his Sunday round in the morning with two fellow contenders in his group. Maybe Tiger needed a dramatic change in the competition to end his drought. Maybe he needed Augusta National’s elders to shock the world and turn this event on its head.

Club elders control everything at the Masters — everything except the weather. Mother Nature is undefeated, and the green jackets bowed to her will by looking at the radar and responding smartly and forcefully. Golf’s organizing bodies often lack common sense in these situations, and Lord knows Augusta National’s leaders have made their share of bad decisions over the years.

But when they get it right, they get it right. And with ominous afternoon storms in the forecast and with absolutely nobody rooting for a Monday finish, Augusta National announced that the final round will be moved up — big time.

“The safety of everyone on our grounds is paramount,” club chairman Fred Ridley said in a statement. “We also believe the earlier start will give us the best opportunity to complete the Masters on Sunday. The decision should benefit everyone – the players, our patrons, and out fans watching around the world.”

Well, not everyone. If you are a Lakers fan in L.A. still trying to sleep off your team’s embarrassing follies, 6:20 a.m. local time could be a tough wakeup call to watch Woods take his first swing at Molinari and the rest. But Tiger is worth it. What this could mean, historically, is worth it.

Woods winning the Masters two years after he told everyone that he was done with competitive golf, that he was merely hoping to someday escape his debilitating back pain and play with his kids, would stand among the enduring stories in the modern history of American sports. You saw Tiger step into that birdie at No. 16 Saturday the way a 46-year-old Nicklaus stepped into his at No. 17 in 1986. You heard CBS’ Verne Lundquist, who made the forever Nicklaus call in ’86, ask the question of the week (“Anybody enjoying this?”) before his partner Nick Faldo repeated Lundquist’s ’86 call of “Yes, sirrrrrr.”

You watched Woods take a temporary share of the 11-under lead with Molinari and Tony Finau, who grew up idolizing Tiger. You believed the way you believed at last fall’s Tour Championship at East Lake, where the fans surrounded Woods on the 18th hole before he pumped his arms toward the sky to punctuate his first victory in five-plus years.

Tiger said the other day that he proved to himself — with victory No. 80 — that he could win again. It was a hell of a thing to hear him say. He was asked Saturday how much that belief would help him Sunday.

“You know, it does help because I have won,” he said. “I’ve won with a totally different body than I have dealt with in the past. And that counts for a lot, that I put myself in position to win last year a few times and didn’t do it. But to lead wire-to-wire at East Lake and to do that under tough conditions against the hottest players all year, that gave me a lot of confidence going into the season. And I’ve built this season into where it’s at right now.”

Right now, Tiger’s 2019 season is sitting on Augusta National’s first tee. He will certainly feel the pressure, he said, because he cares deeply about his legacy and his craft. Woods understands that as much as the Masters is racing against Mother Nature, he is racing against Father Time.

“I’ll try and get to bed as soon as possible,” he promised.

Don’t worry, Tiger will get up long before you. But do get up in time and watch every second of this. Breakfast with Tiger might end up being the best meal this game has ever served.