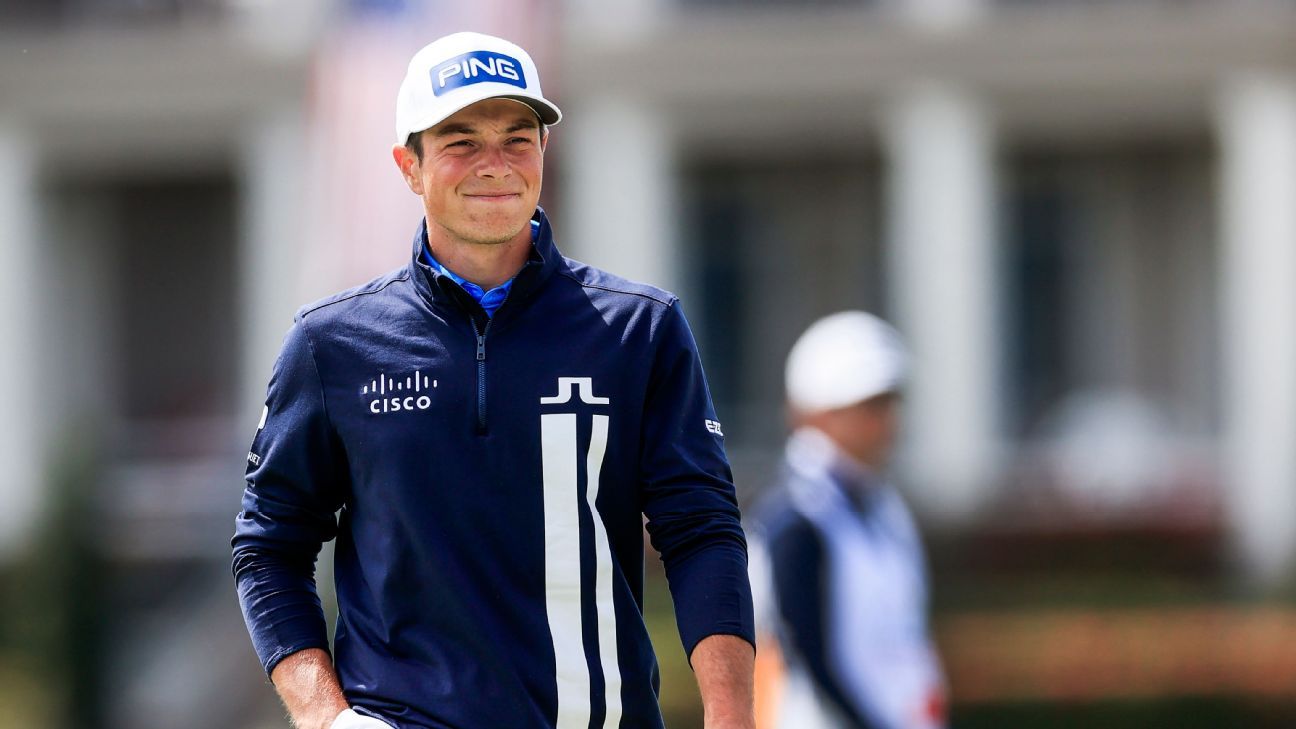 Just over a year ago, Matthew Wolff was finishing up his sophomore season at Oklahoma State by becoming the ninth Cowboy to win an individual national title with a five-shot victory at the 2019 NCAA championships.

A week later, California-Berkeley senior Collin Morikawa qualified for the U.S. Open at a sectional qualifier in Columbus, Ohio. He finished tied for 35th in his first major championship a couple of weeks later, and he celebrated by receiving his Cal diploma on the 18th green after his final round at Pebble Beach.

Norway’s Viktor Hovland, Wolff’s teammate at Oklahoma State, finished tied for 12th at Pebble Beach in his final tournament as an amateur. His 4-under total of 280 over 72 holes broke Jack Nicklaus‘ U.S. Open scoring total for an amateur set at Cherry Hills in 1960. Hovland also was the low amateur at the 2019 Masters with a 72-hole total of 3-under 285.

“It’s still kind of crazy,” Hovland said. “Less than a year ago, we were all playing in tournaments in college.”

When the PGA Tour resumes after a three-month shutdown because of the coronavirus pandemic at next week’s Charles Schwab Challenge at Colonial Country Club in Fort Worth, Texas, the trio of rising stars will resume their quest to establish themselves as the sport’s next great players.

Each of the trio has already won once on Tour, and collectively they’re already drawing comparisons to the best group of young golfers since the class of 2011 that included Jordan Spieth, Justin Thomas and Xander Schauffele.

“The fact that those three guys have won already is unbelievable,” Thomas said. “They probably don’t even realize how impressive it is. But they also understand how talented they are, and we do, too, and they’re going to be out here for a long time.”

Before the coronavirus pandemic halted the PGA Tour at the Players Championship in March, Hovland, Morikawa and Wolff sat outside the TPC Sawgrass clubhouse and talked with reporters as first-time participants.

Morikawa, the elder statesman at 23, joked about Wolff being the “child” of the group because of his playful personality.

“The child? That’s hurtful,” Wolff said. “It’s fine, though. I’ll take it. I like to have a good time and not take anything too seriously.”

Hovland and Wolff know each other well from their two years together at Oklahoma State, and they had competed against Morikawa in junior events around the country.

“We just believed in ourselves from day one,” Morikawa said. “I think each one of us has a strong team around us, and each one of us has built a strong foundation to start off with and having the people to back us. From there, we think our games are ready. We think our games are the best to compete, win and do it multiple times out on the stage. We proved in college that we could do it, and I think we were all prepared.”

Wolff, 21, was the first to win a Tour event at the inaugural 3M Open at TPC Twin Cities in July. Playing on a sponsor exemption, he sank a 26-foot eagle putt from off the green on the 72nd hole to beat Bryson DeChambeau and Morikawa by one shot and collect about $1.2 million.

Wolff, from Agoura Hills, California, became only the seventh Tour player to win in his fourth career start or earlier and only the third player to win an individual NCAA title and Tour event in the same year, joining Ben Crenshaw and Tiger Woods.

“I just think amateur golf now is at such a high level and there are so many good players,” Wolff said. “Viktor beat up on us, we beat up on him. We know we’re just as good as him on any given day. You see him low am, tied for 12th at the U.S. Open, it’s like if he can do it we can. It’s cool to see all of us young guys competing at the highest level.”

Known for his unique and powerful swing, which includes a demonstrative pre-shot left leg wiggle, Wolff is one of the longest hitters on Tour. He ranks 21st in driving distance with a 321-yard average this season. He won two long drive bonuses with tee shots of 356 and 368 yards at last month’s TaylorMade Driving Relief skins match.

“I definitely would want to have Matt’s length,” Morikawa said. “How could you not? The guy kills the ball.”

Oklahoma State coach Alan Bratton said he fell in love with Wolff’s unorthodox swing, even the pre-shot trigger, the first time he saw it.

“I like to look at the down swing when I watch people play golf, and I like to see where they finish and if they can finish on balance or not,” Bratton said. “I like to listen to shots and know characteristics and things that I’ve seen in good players over the years. I’m looking for kids to own their own swing. I like when things don’t look taught and look natural. Although Matt takes the club away a little bit different, it’s very natural.

“I loved the speed that he had and that he could also shape shots, which is becoming more and more rare. Personally, I like to see a guy be able to bring the trajectory up and down and curve the ball both directions, and he could do that. I loved his swing from the start and immediately went into trying to coach him to not allow anyone to change anything.”

Wolff is still searching for consistency. He hasn’t had a top-10 finish in 14 Tour starts since his inaugural win.

Consistency has not been a problem for Morikawa. He hasn’t missed the cut in 20 Tour starts as a pro, with six top-10s and 11 top-25s. He won in only his sixth Tour start as a pro when he birdied four of the last five holes at the Barracuda Championship in late July. He already has earned $2.84 million in less than two full seasons.

“For me, that’s the kind of player I wanted to be,” Morikawa said. “I wanted to be a very consistent player that’s able to contend. I haven’t been to that point yet. When you look at players like Rory [McIlroy] and Tiger in his prime, they’re contending every single week, not just making cuts. That mentality for me has to change. It’s not about making cuts, it’s about trying to win.”

Morikawa fell in love with golf as a young child when he followed his parents to the driving range near their home in Los Angeles. They stopped playing golf to support him, whether it was baseball, basketball or skiing.

“It hit a point where I had to figure out, what do I want to do?” Morikawa said. “Around 10 or 11, I decided to drop everything and do golf. I’ve never had any other dream but to be a pro golfer.”

Hovland, 22, didn’t start playing golf until he was 11. His father, Harald, worked as an engineer in St. Louis and brought his son home a set of clubs. Viktor spent most of his time practicing at an indoor driving range.

Bratton said he noticed Hovland while he was watching future Oklahoma State player Kristoffer Ventura compete at the European Boys Team Championships in Scotland in 2013. Hovland was Norway’s third- or fourth-best player at the time.

“Viktor was new to the team and it was the first time I’d seen him,” Bratton said. “His skill set wasn’t as obvious, but I’ve been around good players for a long time, and at least to me some of the things you can’t see I felt like I saw in Viktor. His confidence, his competitiveness, his being comfortable in stressful situations on the golf course, all of those on top of what I thought was a nice game.”

In 2015, Bratton identified Hovland as his top recruiting target with no backup options. Hovland signed with the Cowboys shortly after visiting campus. In 2018, he helped the Cowboys win a team national championship and later that summer won the U.S. Amateur at Pebble Beach with Bratton on his bag.

Unlike Morikawa and Wolff, Hovland had to earn his PGA Tour card by finishing in the top 25 of the Korn Ferry Tour Finals in 2019. In his 12th Tour start as a pro at the Puerto Rico Open in February, he became the first player from Norway to win on Tour. At one point over the past two seasons, he posted 19 straight rounds in the 60s, the longest such streak on Tour since 1983.

“I’d like to have Viktor’s attitude and his off-the-tee game with how far and straight he hits it,” Morikawa said. “I think Viktor and I are similar in distance, and Matt is out there in another atmosphere. Viktor’s ball just doesn’t move. He hits these straight drives every time, and it’s awesome to watch.”

As consistent as Hovland has been on the course, he is surprisingly unpredictable off it. He has a dry sense of humor, according to Wolff and others, and isn’t afraid to poke fun at other players.

At the Abu Dhabi Championship earlier this year, Hovland was asked why he isn’t on Twitter and unexpectedly took a playful jab at Phil Mickelson.

“I don’t know. I really don’t feel like I need Twitter in my life right now,” Hovland said. “Maybe I’ll reach the mid-life crisis like Phil just went into and we’ll see.”

At the John Deere Classic last year, after some people on social media suggested Hovland looked like “stoned Rory,” a reporter asked him about being a co-favorite to win the tournament.

Hovland’s response was completely unexpected: “I don’t know what my thoughts on that are … lay off the weed!”

“I think we’re all different,” Morikawa said. “Even though I am actually the oldest one in age, I feel like the most mature out of the three. Matt is definitely the child of the three, and he has to stay that way because that’s his personality. He has to keep smiling. Viktor has a great sense of humor. Whatever he says, he’s sarcastic and funny.”

Regardless of what the future holds for the trio, they’re determined to keep having fun and competing with each other.

“We all need to smile on the golf course,” Morikawa said. “That’s who we are, and that’s how we have to play.”