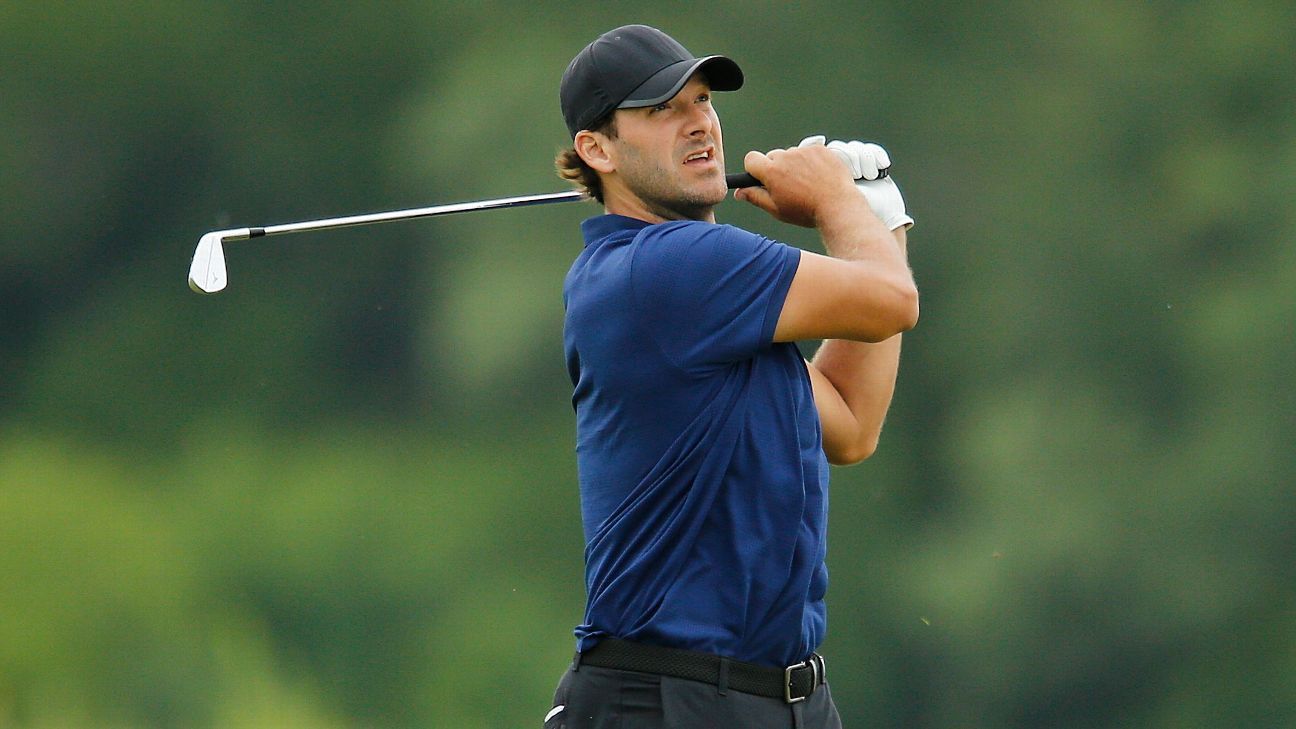 DALLAS — On almost every tee box and every green Thursday, Tony Romo was greeted by shouts of encouragement during the first round of the AT&T Byron Nelson at Trinity Forest Golf Club.

Good shot or bad, the fans were as invested in Romo as they were during his decade-long run as the Dallas Cowboys‘ starting quarterback.

“It was fantastic,” Romo said. “It was really enjoyable. I could feel the energy and just feel them pulling for you. It made me feel good inside.”

Ultimately, Romo did not have the round he or the fans wanted, finishing with a 5-over 76 that left him tied for 148th after one round, but he had moments that brought about some of the loudest cheers at the tournament.

Denny McCarthy leads the Nelson after a 63, followed by Tyler Duncan and Tom Hoge at 64, but Romo was one of the featured players of the day, which is why he was granted a roster exemption.

As he walked to the first tee, fans yelled his name. As he walked down the fairways, Romo waved or gave a thumbs-up for those spurring him on. Fans young and old wore his No. 9 jersey. At one point, a fan said, “If [Jason] Witten can come back, you can, too.” Another fan added, “That’s my quarterback,” conjuring up Terrell Owens’ teary-eyed reply after the 2007 playoff loss to the New York Giants.

Romo opened with a birdie on the par-5 first hole with a 14-footer. After a bogey on No. 5, he got to 2-under on the seventh hole when he chipped in from 66 feet off the green, letting loose with a huge fist pump and loud, “Let’s go!” as the gallery roared in approval.

“That’s one of the best shots he’s ever had,” said Romo’s son, Hawk, who walked the course with his younger brother, Rivers; mother, Candice; and both sets of grandparents.

Romo followed the eagle with an impressive up and down to save par on No. 8, but his round turned quickly on the 505-yard, par-4 ninth hole when he badly hooked his tee shot into the woods, leading to a double bogey.

He made another double bogey on No. 13 when his tee ball ran through the fairway into the tall native area. He made bogeys on Nos. 14, 15 and 17 mostly because of poor tee shots. He hit just six of 14 fairways and only eight of 18 greens in regulation.

“A couple of those tee shots really cost me just because they’re penal in those areas,” Romo said. “You can’t miss them there. The separation between these guys is the ability to do it for long stretches, consistency. I think just a few tee shots cost me the round.”

It was better than what Romo shot in March at the Corales Puntacana Resort & Club Championship when he finished 15-over for the second straight year at the PGA Tour event, but he felt disappointed in his day because he has played so many rounds at Trinity Forest, where he is a member.

“I thought I was going to drive it much better than I did,” Romo said. “That’s why we weren’t able to continue to keep the pace we had early. That’s going to be the key moving forward, just getting yourself in the position to attack these pins and some of these hole. Otherwise, you’re trying to fight against the grain the entire time.”

Romo’s father, Ramiro, was among the gallery for the entire round. Watching his son play quarterback was more difficult for him and his wife, Joan, he said, because of “the injury factor.” The feeling on the golf course is different.

“Probably some of the bad shots, you live and die with them,” Ramiro said. “The good ones, you’re just happy. I’ve played enough golf with him and know how good he is and how good he can be. He’ll acclimate.”

After his round, Romo was off to the driving range in the fading light.

“I’ve got to go hit some tee shots that really feel good, because if not, I won’t sleep tonight,” he said.

The chance of making the cut are remote at this point, but Romo was already thinking about Friday’s second round.