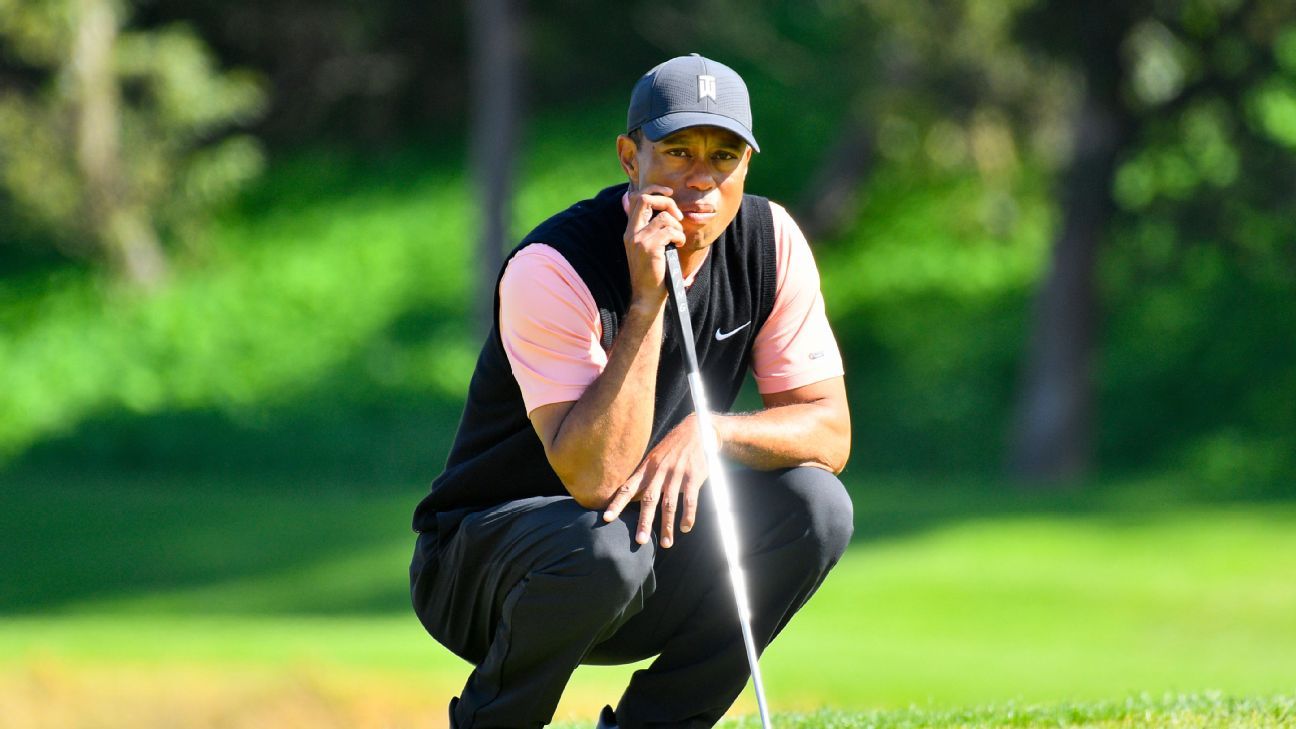 When the PGA Tour schedule was put on pause because of the coronavirus pandemic, Tiger Woods had already been out of action for a month, with questions about his health and whether he’d even be fit to defend his Masters title.

Seven weeks later, and Woods’ back issues — relatively speaking — no longer seem to be an issue. He said during the rebroadcast of his Masters victory on April 12 that he “would have been good to go,” and that he has been able to practice and play at The Medalist near his home in Jupiter, Florida.

The tour has since announced a revised schedule that would begin on June 11 at the Charles Schwab Challenge. Woods has already agreed to play in a COVID-19 fundraiser along with Phil Mickelson, Peyton Manning and Tom Brady, expected to be Memorial Day weekend.

As for Woods’ tour schedule, it has always been a bit of a guessing game as to where he will show up. That is thrown more into doubt with a wildly different look to what Woods and the rest of his peers are used to seeing in the summer months. He is faced with playing some events he has rarely — or never — played and a hectic fall schedule with three of the majors postponed.

A lot can still change. The PGA Tour has put forth its schedule with the caveat that it needs the go-ahead from government and health officials. The first four events are scheduled to be played without spectators.

Woods has not played since Feb. 16, when he shot a final-round 77 at the Genesis Invitational to finish 68th, alone in last place among those who made the cut. For the season, he has played just three tournaments, including one in October at the Zozo Championship in Japan, where he tied Sam Snead with 82 PGA Tour victories. His only other start was a tie for ninth at the Farmers Insurance Open.

You can count on Woods for the three majors this calendar year (the PGA Championship, U.S. Open and Masters), the Ryder Cup if he makes the team (he is currently eighth in the U.S. standings, and no announcements have been made about a revision to the criteria) and almost certainly Jack Nicklaus‘ Memorial Tournament.

The rest requires some institutional knowledge with a good bit of conjecture. So here is a rundown of the rest of the events scheduled for 2020 — across two seasons — and where Woods might show up.

Woods’ lone appearance in the event came in 1997, when he finished fourth a week after winning his first start since capturing the Masters by claiming the Byron Nelson Championship. Colonial apparently wasn’t much to his liking at the time, but it would seem to be now. And if Woods is really itching to play, the first event back makes a lot of sense.

Another event Woods has played just once — a tie for 18th in 1999 — at a course that didn’t seem to suit him but now very well might. Harbour Town Golf Links is the kind of place he should love, especially the way he is so adept at working the ball on a layout that demands it. Plus, he can summon his yacht, Privacy, to the South Carolina shore. This one makes plenty of sense, too, but Tiger isn’t going to play both of the first two. You’d think he would play one of them, however. This is the week previously scheduled for the U.S. Open, which has been moved to September.

The only chance here would seemingly be if Woods skips the first two. It’s an event he has never played.

Almost no chance. Maybe if he skips the first three and really wants to play somewhere, but Rocket Mortgage/Quicken Loans bailed as sponsor of his tournament in the Washington, D.C., area after the 2018 event. Tiger has a long memory.

For sentimental reasons, it would be great for Woods to return to the small-town Illinois event where he sent rumbles through the Midwest years ago as he moved into contention for the first time as a pro back in 1996. In just his third event, Woods took the 54-hole lead, only to stumble the final day as Ed Fiori won the tournament, with Woods finishing fifth. Three weeks later, Woods won his first title in Las Vegas. Alas, this is also not likely, especially with the Memorial Tournament scheduled for the next week.

Woods has won Jack Nicklaus’ tournament five times, and it’s unlikely he’ll skip it, especially since the schedule sets up favorably for him to play it. Whether he plays one of the early events or not, this is perfectly placed as a tuneup for the PGA Championship, which is three weeks later. This tournament occupies the date held previously by The Open, which has been canceled.

Almost no chance. Woods is not going to be playing two weeks in a row very often, and even if for some reason he skips the Memorial, he’d be more likely to play the WGC-FedEx St. Jude Invitational the next week.

The WGC event that Woods dominated when it was played at Firestone in Akron, Ohio, relocated to Memphis, Tennessee, last year — when Woods was a no-show with various back and knee troubles. It’s a tough call this year, too. It’s the week before the rescheduled PGA Championship in San Francisco. Woods used to make the WGC-PGA double a routine part of his schedule in days gone by, but it’s less likely now. This could very well come down to where Woods is in the FedEx standings (he is currently 28th) and how much he wants or needs to grab the free points. The idea of going from extreme heat to cool temperatures in San Francisco is also a factor. This tournament is taking the vacated Olympic golf tournament dates.

Woods will return to Harding Park in San Francisco, where he beat John Daly at what was then called the WGC-American Express Championship in 2005. He also went 5-0 at Harding Park during the 2009 Presidents Cup.

Following a major championship and preceding the FedEx Cup playoffs means a no-go here for Tiger.

The first of three consecutive weeks of FedEx Cup playoff events, this will lead to an interesting decision for Tiger: Is he going to play three in a row? Will he even play two in a row? If his place at East Lake is secure, you could see him skipping this and simply playing the last two. If not, maybe he’ll play this and try to earn enough points so he can skip the BMW Championship. The Northern Trust is back at TPC Boston, where Woods has had success.

Here’s another thing to consider: The three playoff events conclude just two weeks before the U.S. Open/Ryder Cup (as scheduled) double. It’s what makes predicting the playoff events quite tricky. The BMW is being played at Olympia Fields in suburban Chicago, site of the 2003 U.S. Open won by Jim Furyk. Woods tied for 20th.

Tiger’s epic victory at East Lake two years ago was among the amazing high points of his return from spinal fusion surgery, and he’d obviously love to return to a place where he experienced such an accomplishment. He missed qualifying last year. If Woods makes the top 30 in points, expect him to be in Atlanta. It’ll simply be very interesting how it plays out in getting there.

The first event of the new season will have no shot at Tiger. Not with all that potentially precedes it — and what could possibly follow.

If the U.S. Open goes on in its rescheduled spot, Woods will return to Winged Foot — the place of his first missed cut as a pro in a major championship. In 2006, Woods was still mourning the death of his father, Earl, a month earlier. He came in unprepared and delivered a rare lackluster performance. Woods finished 29th in the 1997 PGA Championship at Winged Foot.

There is considerable speculation about the Ryder Cup being played without spectators or not at all, possibly being postponed to 2022. As far as Woods is concerned, this is not great timing this year. A week after a major, where he is likely to be drained, is a problem. At the moment, Woods is eighth in the standings for Steve Stricker‘s team. Should he play? It’s hard to forget that he was the best player at Royal Melbourne for the Presidents Cup. He was also pretty bad in 2018 at the Ryder Cup in France, the week after his Tour Championship win. How this plays out will be something to watch.

Although it’s unlikely, there’s a chance Woods will have played seven of the previous nine weeks. Six of nine is more likely, and five of nine is a distinct possibility. Any of those scenarios makes this tournament an easy skip.

The first of Tiger’s 82 PGA Tour victories came in Las Vegas, but for the reasons stated above, there is almost no chance he’ll be there this time.

There is little chance Woods will play here, the first of three events on the PGA Tour’s Asian Swing, with a title defense looming a week later in Japan.

The site of his 82nd PGA Tour victory, Woods is not a lock to return to the event outside of Tokyo. While he has plenty of business interests in Japan — and there is a chance another skins-game-type event could be set up to entice him — the busy schedule and the Masters looming make this more of a doubt than otherwise would have been the case. But if Woods is to get in a tournament after the Ryder Cup and before the Masters, this is the most realistic opportunity.

In another year, perhaps there would be a chance. But not this year with Augusta National on his mind.

Tiger has never played the week before the Masters as a professional. He won’t start now.

The defending champion has been able to hold on to the green jacket a little longer. If the five-time winner makes it six, he’ll have less than five months to get ready for another title defense in April 2021.

Perhaps one day, Tiger will do his buddy Davis Love III a solid and attend his tournament. Not this time.

The same week is the Mayakoba Classic, so obviously Woods will not be at that event in Mexico. He’ll be in the Bahamas to host his annual event at Albany Golf Club.

If Tiger plays the Charles Schwab or RBC Heritage, along with the Memorial, WGC-FedEx, PGA Championship, Northern Trust, BMW, Tour Championship, U.S. Open, Ryder Cup, Zozo, Masters and Hero, that would be 12 tournaments. And that appears to be a lot.

More likely, he’ll skip something along the way — perhaps a playoff event, maybe the WGC in Memphis — bringing it to a more manageable 10 events. Since he has already played two in 2020, 12 events for the calendar year seems about right.