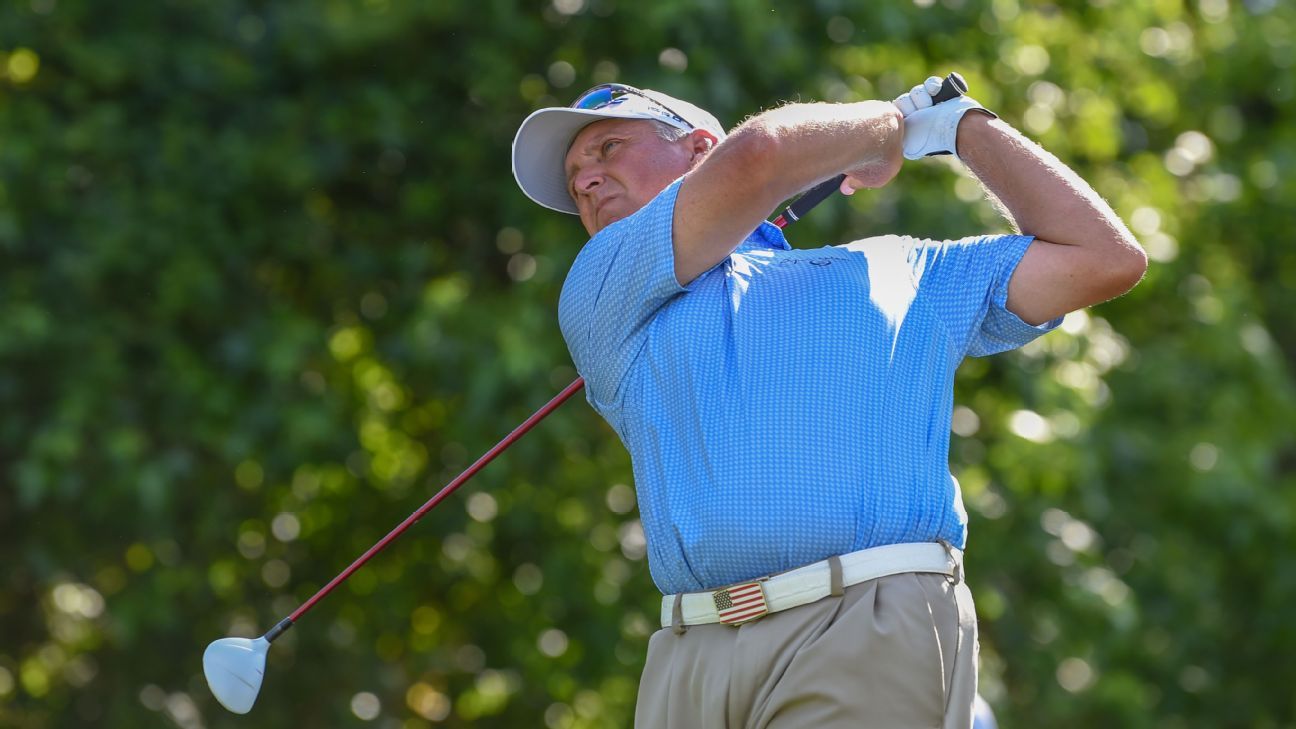 The gusting afternoon wind, which buffeted flags and shook hospitality tents across Oak Hill Country Club’s East Course, hadn’t yet fully arrived when Parel closed with birdies on the par-4 17th and 18th. Retief Goosen, Marco Dawson and Ken Tanigawa were a stroke back.

The round was completed just before 9 p.m., about a half-hour after the sun set, and 14 hours after the first group teed off. The long day was the result of late-morning thunderstorms that caused a delay of 2 hours, 15 minutes.

Parel also eagled the par-5 fourth, dropped a stroke on the par-4 seventh and birdied the par-5 13th.

Jesper Parnevik, Jeff Maggert and Darren Clarke shot 69s on the 6,800-yard course that changed in complexion with the dramatic shifts in weather that rolled through suburban Rochester.

The day began with temperatures in the mid-60s and hardly a whiff of a breeze. Though rain softened the usually fast greens in the afternoon, players faced 15 to 25 mph wind, with gusts up to 40. That played havoc on the narrow course with tiny greens and placed a premium on avoiding the rough.

Of the 15 players who finished under par, 12 came from the morning groups and just three from the afternoon.

The morning groups combined to finish averaging a score of 73, with the average ballooning to nearly 76 among the afternoon players.

“We couldn’t have had it any easier,” said Goosen, who had four birdies and a bogey after teeing off at 8:20 a.m. “There was not a breath of wind and the greens were still fresh. So birdies were there to be made early on.”

Defending champion Paul Broadhurst was in a group of 12 players who shot even-par 70.

PGA Tour Champions money leader Scott McCarron failed to take advantage of morning advantage by shooting 2 over. He was playing his third major in three weeks after winning the senior major Regions Tradition and then missing the cut at the PGA Championship at Bethpage on Long Island last weekend.

Parel said he benefited from the lack of wind in the morning, and also got a boost once play resumed with the wind at his back on the 477-yard, par-4 closing hole, which he birdied. He felt bad for those who were still on the course.

“From the way the wind’s blowing now, 100 percent yet, the guys this afternoon are going to have a much harder time,” Parel said. “Luckily, I took advantage of being on the good end of the wave in good conditions.”

Parel didn’t take up professional golf until his 30s, and is in his third full season on the senior tour.

He joked about benefiting from this being his first time playing at Oak Hill, unlike many others who have competed at previous majors the course has hosted.

“Maybe I don’t have the scars from this golf course that a lot of other guys have,” Parel said.

Dawson, whose group teed off at 2:25 p.m., expressed relief in shooting 3 under given the conditions.

“Very happy with the round. I wasn’t expecting it. I thought it was going to be a tough day,” said Dawson, the 2015 British Senior Open winner. “Two-over-par was probably a good score with this wind.”

Tanigawa got off to the day’s best start. He was 3 under through nine and then birdied Nos. 10 and 13 in getting to 5 under before bogeying each of the next two holes.

“That’s not really how I envisioned my first bogey,” he said, referring to a three-putt on the 323-yard, par-4 14th hole. “I thought I might hit it in the rough and have to chop out to make a routine bogey.”

The 51-year-old joined the PGA Tour Champions last year, and after he walked away from professional golf after an unsuccessful year on the then-Nationwide Tour in 2003. Tanigawa counts one senior victory, the PURE Insurance Championship at Pebble Beach, California, last year.

He grew up in southern California, and was teammates with PGA Tour regulars McCarron and Brandt Jobe at UCLA, and spent 11 years playing professionally in Australia, Asia and Japan.