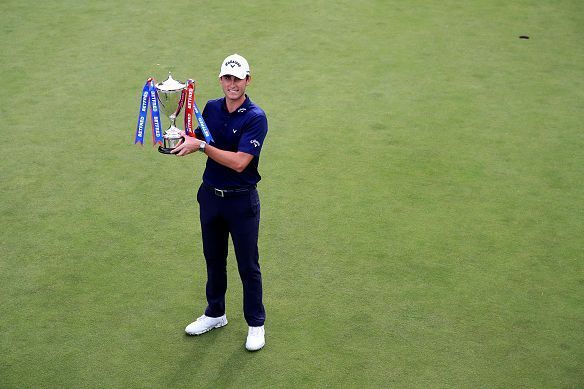 Italy’s Renato Paratore maintained remarkable consistency to win the British Masters by three strokes, retaining his overnight lead and finishing at 18-under overall at Close House in Northumberland on Saturday.

Paratore, 23, closed with a two-under par 69 in windy conditions to clinch his second European Tour title, adding to his Nordea Masters win in Sweden in 2017.

The Italian held a one-shot lead heading into the fourth round and continued his bogey-free run — which finally came to an end after 62 holes — to hold off Denmark’s 19-year-old Rasmus Hojgaard who finished second.

“This feels amazing, I’m really, really happy. Today was not easy,” said Paratore, who became the second Italian to win the event after Baldovino Dassu 44 years ago.

“I played really solid. I didn’t expect to come back and win my second one after lockdown but I worked really hard the last year.”

South Africa’s Justin Harding, who was second after Friday’s play, dropped to third with three bogeys in his final round to card 72 for 14 under overall — four strokes behind Paratore.

The 1.25 million euro event is the first of six tournaments to be staged in Britain without spectators amid strict protocols to guard against the threat of COVID-19.

With no crowd to celebrate Paratore’s victory, his fellow competitors gave him a guard of honour as he walked off the green at the 18th while organisers also got his mother to congratulate him via a video call.

“I didn’t expect that from my friends here on Tour and it was a really good sensation and these are the moments I love,” he added. “To see my mama was a big surprise and I was really, really happy.”

England’s Lee Westwood, who is the tournament’s host, had a day to forget on the course, finishing last among those who made the cut as he closed with a 79, which included three bogeys and three double bogeys.

Westwood needed eight shots on the par-three ninth hole alone but his 16 birdies over the four rounds ensured event sponsors Betfred would donate £16,000 for the event’s official charity, the Sir Graham Wylie Foundation.