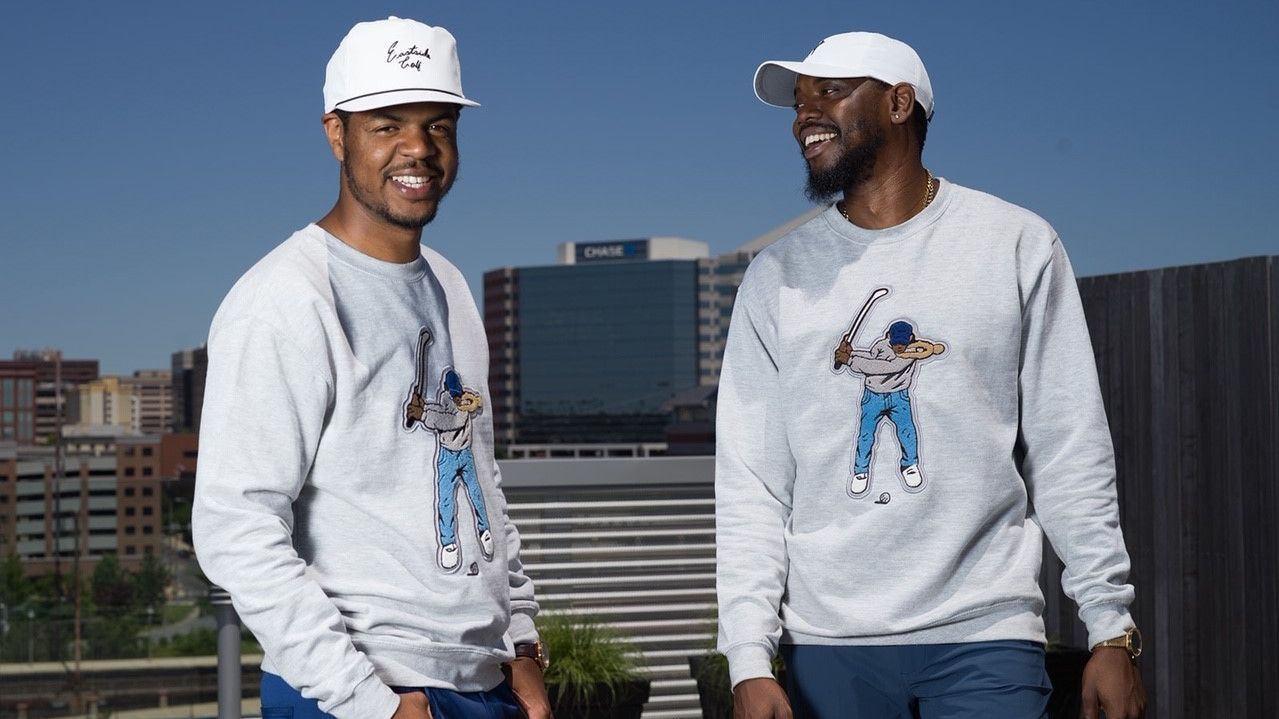 DETROIT — Olajuwon Ajanaku and Earl Cooper were shocked by the reaction they got at the PGA Merchandise Show in January.

The friends and business partners walked the aisles proudly wearing the logo of their new company, Eastside Golf, on their shirts. A logo that features a man playing golf in jeans, a sweatshirt, a gold chain and a baseball cap.

It’s more than a logo, though. It’s a representation of Ajanaku and Cooper, both 31, the journey they’ve taken in golf and their desire to help grow the sport through fashion and culture. It embodies their effort to attract a different demographic to golf and show people they can be themselves on the golf course and that you don’t need to leave your personality in the parking lot.

At 6-foot-3, and African-American in a sport that is trying to increase its diversity, Ajanaku already stood out, but walking the aisles of the PGA Merchandise Show wearing a logo that is so far from the norm in the golf industry, he stuck out even more. The two friends and former college teammates were testing the reaction to their new apparel company from industry professionals to see if their concept could work.

“Me being a PGA professional, I’ve been to a ton of PGA shows and when Olajuwon said we should go down there, I was really hesitant,” Cooper said. “We go down there and I have never seen anything so contagious before; not in the golf industry. I told Olajuwon in Orlando, you got something here.”

Cooper was hesitant because he wasn’t sure how an uber-traditional industry that, for the most part, has stayed inside the lines when it comes to apparel and fashion would react to the brand. Two African-American golfers with a lifestyle brand received an overwhelmingly positive reaction.

That reaction elicited a sigh of relief from Ajanaku, who initially started the company as a way to help finance his dreams of making it on the PGA Tour.

He has played golf since he was 6 years old, growing up on the East side of Atlanta. When all his friends chose basketball or football, he chose golf. The sport became something that filled any voids he had in his life and became his passion.

He and Cooper met as teammates on the golf team at Morehouse College. Their team won the National Minority Golf Championship, now called the PGA Works Collegiate Championship, in 2010.

Ajanaku pursued professional golf, while Cooper became a PGA member working at private clubs and getting into instruction and teaching.

Playing on mini-tours proved to be difficult for Ajanaku. Even with a few wins, keeping up financially can be difficult for even the best golfers. Managing travel expenses, tournament costs and everything required to compete consistently caught up with him and forced him into the business world.

Still playing golf recreationally, Ajanaku joined the commercial finance world, working with banks during the day to pay the bills and pass the time. Finance didn’t fill the void the way golf had, though, and he knew he couldn’t pass up the chance to pursue his passion of playing golf professionally.

Walking in the door one evening after a long day’s work, Ajanaku realized he needed golf in his life. He was missing that piece that fueled him and had been an integral part of who he is. So he decided to take action.

That’s when the logo was created. The man wearing jeans, a sweatshirt, a gold chain and a hat.

It represented Ajanaku in some ways, but it also represented his former teammates at Morehouse, his friends in Atlanta who had picked basketball and football instead of golf and anyone else who thought golf might not be for them based on their perception of the game and who fit into that mold.

He put the logo on a T-shirt and wore it out around town in his new home of Detroit. He was stopped by roughly 20 people asking him what the brand was and where they could get one of the shirts. It was at that moment he knew this would be more than a way to finance his dream.

It was an opportunity to bring newcomers into the game he loved who otherwise wouldn’t have thought they fit in.

“For the younger generation to see that logo and think golf can be cool, I can be myself, and that’s what the jeans and sweatshirt and chain represents,” Ajanaku said. “I can be myself and look however I want to and get into the game of golf, because a lot of times when you go to a country club, you have to fit into this box. But this way, you can be yourself outside of that box, but still play golf.”

In November 2019, Ajanaku put a business plan in place to create Eastside Golf shirts, sweatshirts, hats and ball markers, all emblazoned with the distinctive logo.

The new brand conveyed the message that golf is for everybody, that you can be yourself on the course and that you don’t have to look a certain way to play.

“How you really grow the game is outside of golf,” Ajanaku said. “We had an interview with AllHipHop.com, and I think we’re probably the first golf company to have an interview with a hip-hop company. But that speaks volumes that we can be whatever we want in life by still being yourself and that’s the most important part.”

Some of the bigger golf apparel companies have moved toward using fashion as a way to push boundaries. Puma has introduced a variety of golf shoes, including high tops and most recently the RS-G shoe, which bears a resemblance to Kanye West’s Yeezy wave runner shoe. Nike has pushed boundaries with its apparel and shoes as well, but the notion of growing the game by showing non-golfers there isn’t one set way you have to look is novel.

That someone can wear an Eastside Golf T-shirt with a logo on it and spark a conversation about golf or pique someone’s interest in the sport is what Ajanaku and Cooper are hoping the brand can achieve. They both believe the game has given them so much, and as their company grows in popularity they hope they’ll have an opportunity to show others what golf can give to them as well.

Opportunities with youth golf organizations, including The First Tee, are all part of the future plans for Eastside Golf to help give back and continue to spread its message.

“It’s definitely a platform we believe can be used to inspire change,” Cooper said. “This is already inspiring folks, but to see that change on a national level now, I hope we can continue to contribute to that. This brand speaks to our kids, and will speak to the next generation of golfers, so we look forward to being authentic and helping to use this brand to help grow the game.”

What started as an idea to help one individual reach a personal goal is now growing into a catalyst to bring others together into a community they otherwise wouldn’t have felt they fit into. No matter race, age or status, Eastside Golf says it’s for everybody; for everybody to experience the game of golf and to do it together.

“Eastside Golf is saying to those people, ‘Just try golf,'” Ajanaku said. “It’s giving them the leeway to say, ‘This is cool, it’s something I can try. Let me try it, then later on, I can receive the benefits of it.’

“So we’re going to push forward and try to give golf to everyone.”