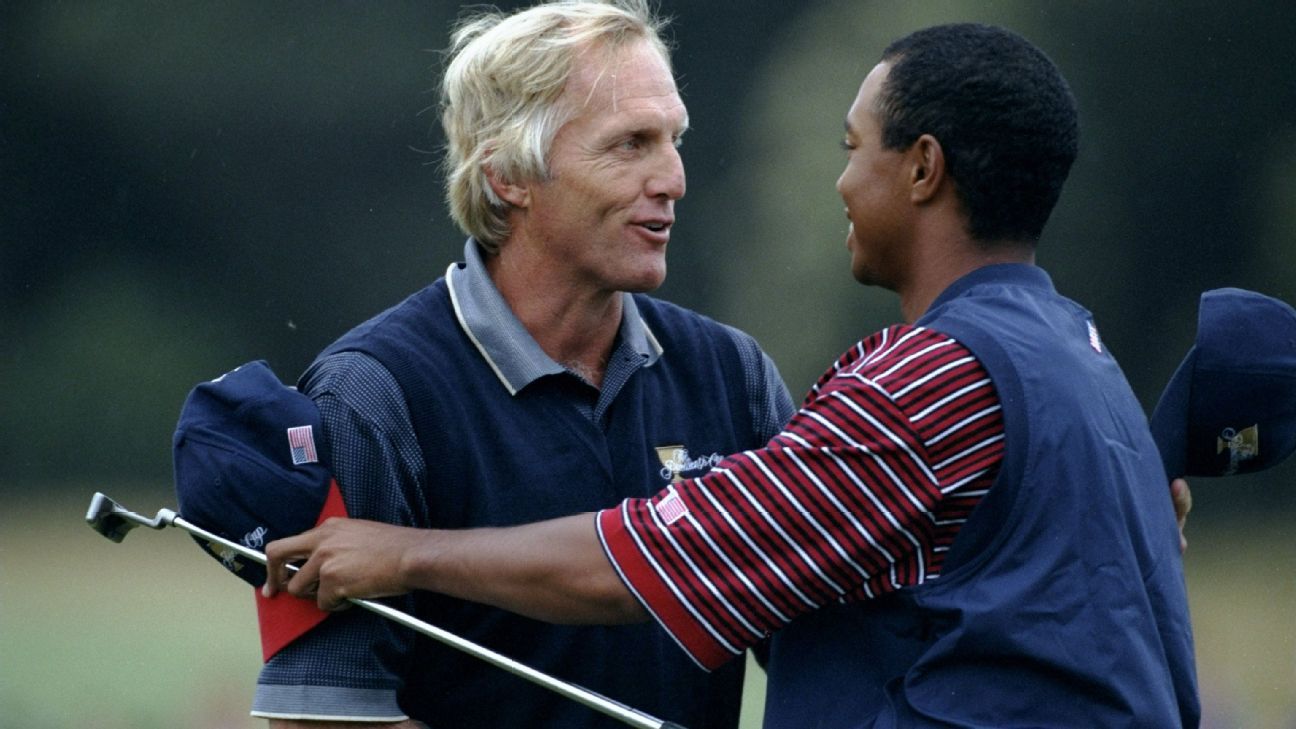 MELBOURNE — Considering how much has changed for Tiger Woods during his return to prominence in the past year, it’s perhaps surprising he has such a strong memory of the United States’ only Presidents Cup defeat in 1998.

On a whirlwind tour of Australia to promote the 2019 Presidents Cup in Melbourne, Woods opened up about his memories of the loss to the Internationals 20 years ago.

Back in 1998, Woods, fresh from his rapid ascent to No. 1 in the world, beat legendary Australian Greg Norman in a thrilling final-day singles contest in front of a passionate pro-International crowd. It was a rare highlight for that U.S. team as their rivals easily won the event for the first and so far only time.

“I wanted to play against him,” Woods recalled of his battle with Norman at a packed media conference at Melbourne’s Southbank boulevard, a stone’s throw from the famous Yarra River which flows through the city.

“(Captains) Jack [Nicklaus] and Peter [Thomson] had talked about what kind of pairings would be great for the tournament. We were getting blown out, and so that was one of the key match-ups that I felt like I could handle and I could play, and I felt like I could earn a point for our U.S. side.

“When we came down here … it was late in the year in December, we didn’t have the wraparound schedule like we do now. The guys took quite a bit of time off, and quite frankly, we weren’t prepared to play, and we got smoked. The Internationals came out ready, prepared, played, and they drummed us.”

That lack of preparation is a mistake Woods is desperate for the U.S. to avoid, despite what will be a frenetic finish to the 2019 calendar, especially for those who play in his Hero World Challenge in the Bahamas, an event that benefits his TGR Foundation.

Woods said he had several meetings scheduled while in Melbourne to discuss the logistics of travel ahead of the 2019 Presidents Cup and while he hoped to attract the strongest field possible to his Hero tournament, he was also determined to ensure his team was well prepared.

“I hope they play at the Hero World Challenge. That’s an obvious one,” he said. “I would encourage them to stay competitive late in the year. That’s what we learned in ’98, is that the guys weren’t competitive … hopefully they’ll play my event in the Bahamas, but if not, stay competitive, stay prepared, stay sharp.

“We’ll see what happens. We have to figure out some logistical things between now and then. That’s one of the reasons why I’m here, to try and figure that out. We’ve got a few meetings here scheduled later today, and try and get a better plan going forward so that we can get the best field we can at the Hero, as well as getting everyone here from the Bahamas to this tournament, get them rested, getting them prepared and getting them ready to play and compete.

“My job is to make sure that the guys are prepared, they’re still playing and trying to stay fresh and competitive late in the year.”

Woods can of course draw a crowd anywhere, but a rare appearance in the sports-mad city of Melbourne drew a huge throng of onlookers eager to catch a glimpse of the 14-time Major winner. Even his order at a nearby mobile coffee cart created a stir, with media and fans alike craning their necks to see what type of brew Woods preferred.

The easy-going atmosphere will likely be a far cry from the one that greets Woods and his U.S. team next December when they lock horns against an International outfit likely to feature several Australian players.

“There will probably be, what, 40,000, 50,000 people on an old, traditional golf course? Hopefully the weather will be better than it was in ’11 and not so damned hot, or so cold like it was on Saturday,” the 42-year-old said in reference to Melbourne’s notoriously fickle weather.

“The last two Cups that we’ve had here have been so exciting — the Aussies have come out and supported the event. Are they going to cheer when their team does well and we don’t make a putt? Of course. But at the end of the day, these are some of the greatest sports fans in all of the world, and they show out and they’re so respectful of all the players.”