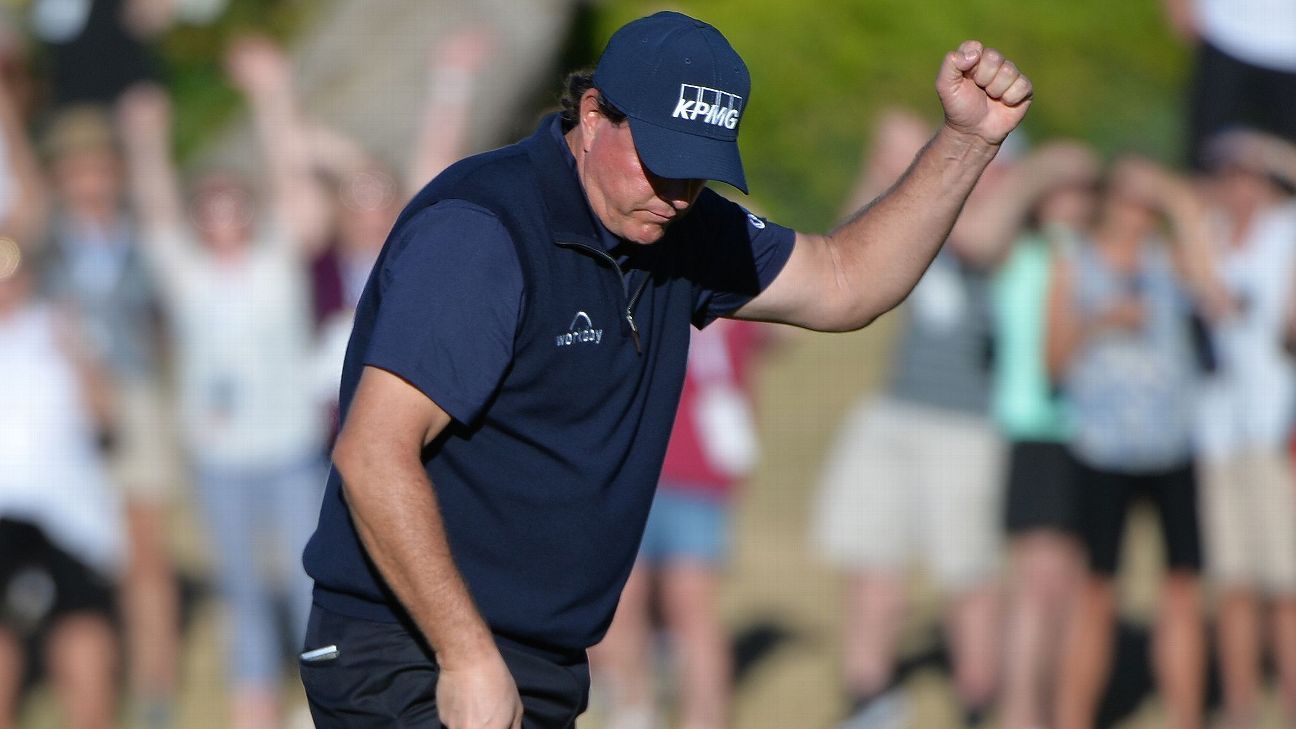 LA QUINTA, Calif. — Phil Mickelson made three long birdie putts on the back nine Saturday to take a two-stroke lead into the final round of the Desert Classic.

Making his first start of the year, Mickelson shot a bogey-free round of 6-under 66 on the Stadium Course at PGA West to get to 22-under 194.

“I don’t know what to say,” Mickelson said. “I played OK and my goal or game plan of playing the Stadium Course is to actually hit drivers and to try to bomb it down there as close to the greens as you can. … It seemed to play out OK and I gave myself a lot of good chances. I missed a few short putts … but I also made a couple of long ones that were nice little bonuses.”

He topped the leaderboard for the third straight day after matching his career-low score with an opening 60 at La Quinta Country Club and shooting a 68 on Friday on PGA West’s Nicklaus Tournament Course.

“It’s so fun,” Mickelson said. “I just love being in contention, having a chance to win, being in the final group, feeling the nerves, feeling that excitement, the opportunity. It’s just, it’s really fun.”

Adam Hadwin was second after a 65 on the Nicklaus layout. The Canadian has three straight top-six finishes in the event. He was second in 2017 after a third-round 59 at La Quinta and tied for third last year.

“Living in Phoenix these past few years, this is the golf that I play every day,” Hadwin said. “The greens are exactly what we play back in Scottsdale. So I would assume that might add to some of the comfort. It’s really hard to pinpoint. For whatever reason, as soon as I get down here in the desert, I start playing some good golf.”

Mickelson, 48, is making his first tour start since early October and first competitive appearance since beating Tiger Woods in Las Vegas in November in a made-for-TV event. The Hall of Famer won the World Golf Championships-Mexico Championship last year for his 43rd PGA Tour title and first since the 2013 British Open.

After opening with five straight pars, he chipped in for birdie on the par-3 sixth and birdied the next two.

“Every once in a while you just need that little putt, chip, something to fall and give you a little momentum,” Mickelson said. “I followed that with two more birdies, so that was kind of the shot that ignited that little run and got the round going.”

He’ll be back on the Stadium Course for the final round.

“It’s a course you don’t have to be perfect on, you have to hit a lot of good shots in certain spots, but if you miss it, miss it properly, you can still play this course,” Mickelson said. “I feel like I don’t have to be perfect. I can come out, play aggressive, which is how I like to play, try to crush drivers and get it down as close as I can to the greens and see if I can make some more birdies.”

Adam Long was third at 19 under after a 63 at La Quinta, and Steve Marino had a 67 on the Nicklaus layout to get to 18 under. Defending champion Jon Rahm was tied for seventh at 16 under after a 68 on the Stadium Course.

Top-ranked Justin Rose was tied for 29th at 12 under after his third straight 68, this time on the Stadium Course. He’s the first No. 1 player to play the tournament since the world ranking began in 1986.