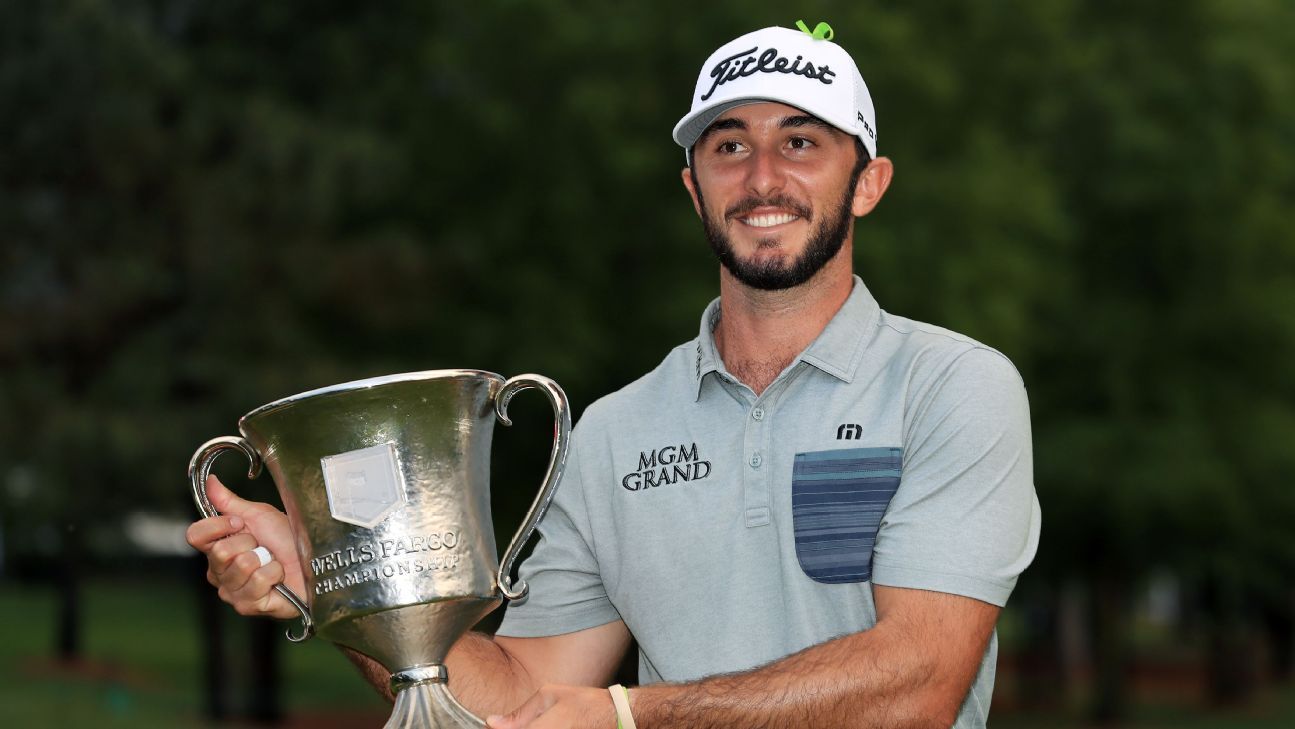 CHARLOTTE, N.C. — They are just numbers, usually separated by a bunch of commas and with zeros at the end. In this case, they signify prize money in golf, figures that have grown so large as to make us numb.

No longer used as the benchmark to determine standings on the PGA Tour, money is nonetheless still important. FedEx points don’t’ spend, but the cold, hard cash does. And if you are a professional golfer paying your own way around the country while struggling to make pars, those big numbers can seem but a dream.

So there was Max Homa on Sunday at Quail Hollow, seemingly cruising to his first PGA Tour victory with a 4-under-par 67 at the Wells Fargo Championship, and $1.42-million richer for the effort.

We shrug. Good golfers make millions. Justin Rose, who tied for third, has made more than $2.5 million this year and doesn’t even rank among the top 10. Matt Kuchar, who leads the FedEx Cup points and who was vilified earlier this year because he at first declined to pay a fill-in caddie more than $5,000 after winning $1.2 million, has made more than $49-million in his career.

“I think I made more money in the pro-ams on Monday than I did in the tournaments,” he said.

So yeah, that $1.42 million he received Sunday might seem obscene (and to be sure a good bit will be eaten up by taxes, caddie fees, lodging, travel, etc.), but it signifies something very real to a player who just two years ago was missing cuts at an alarming rate and questioning a game that for a time seemed so easy.

“Streaky very bad,” is how Homa put it, and his self-deprecation is ultimately what helped him endure his malaise.

“I’ve grown up a lot,” said Homa, 28, who starred at the University of California before turning pro. “My attitude is awesome nowadays. I don’t really get too down on myself. I have an awesome, awesome caddie (Joe Greiner) who doesn’t let me. If I’m quiet, he yells at me and tells me quiet golfers are usually very mean to themselves. So we have a good thing going.”

Homa won the 2013 NCAA individual title at Cal. Later that year was on the same U.S. Walker Cup team as Justin Thomas. Both turned pro after that, both made their professional PGA Tour debuts as the Safeway Open — where Homa tied for ninth. And both made it to the PGA Tour in 2015.

But while Thomas eventually developed into one of the top players in the world (he has nine PGA Tour titles, including a major championship), Homa struggled to find his way.

He lost his Tour card following the 2015 season and had to return to the Web.com Tour. He got it back, then made just two of 17 cuts in 2017, playing those events in 61-over par and dropping outside of the top 1,000 in the world.

Even after returning to the PGA Tour this season, he missed his first six cuts, then slowly began to find some success — although he never contended until this weekend. He began 2019 ranked 836th in the world and was 417th at the start of the week.

Improved driving has been a big part of the turnaround, leading to confidence.

“Whenever I drive it well, I feel great,” Homa said. “I went through some real lows with my driver a couple years ago out here. I don’t remember what my worse one was, but it was embarrassing. I was hitting like seven provisionals a tournament.

“So when I know where I can hit it off the tee and I have a good game plan off the tee, I feel very confident because I really do think I’m a great iron player. Of all the things where you might struggle with self-esteem, that’s always been kind of my go-to. So when I have the driver going like this, I feel great because the foul ball doesn’t feel like it’s in play anymore. I haven’t hit one in God knows how long. That’s where it’s hard because you’re just waiting for a really bad drive and then it gets embarrassing and your score gets a lot worse really fast.”

Perhaps what he will take most from his week was it was no fluke. After opening the tournament with a 69, he shot 8-under-par 63 on Friday without a bogey. A score of 70 on Saturday meant a three-way tie for the lead with Jason Dufner and Joel Dahmen, with Rory McIlroy just two back and the likes of Rose and Sergio Garcia lurking.

But Homa never flinched. He made two birdies on the front nine, added two more on the first two holes of back nine, and wasn’t fazed by an hour-long weather delay. He finished three strokes ahead of Dahmen.

Prior to the Wells Fargo, Homa had posted three top-10s in 68 tries in PGA Tour events, one of those coming in his very first event.

Now he’s got a victory, a spot in the PGA Championship (his first major championship as a pro) and the 2020 Masters — and nearly 100 times more in earnings for a single tournament than he made in a trying 2017 season.

“Like I’m in a dream, I think,” Homa said. “I didn’t know if this day would ever come let alone just keep my card. But it’s been very validating. I’ve been working my tail off and I’ve been seeing a lot of great results.”