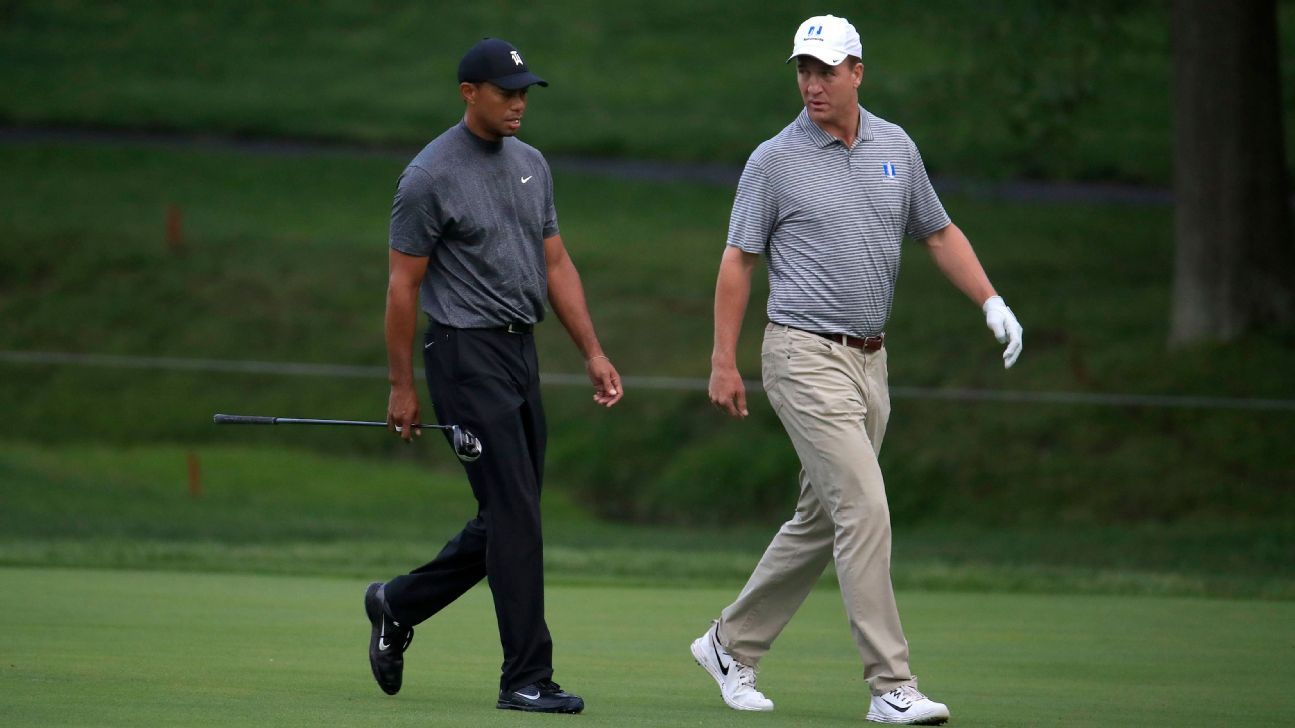 DUBLIN, Ohio — A birdie putt on the final green was a nice touch, aided by a good read from the pro golfer in the group. Peyton Manning used a tip from Tiger Woods to his advantage, and it paid off with one of the biggest roars of the day.

Playing together for the second year in a row at the Memorial Tournament pro-am, Woods and Manning did not disappoint.

Woods was at his casual best as he attempted to get ready for the start of the tournament he has won five times at Muirfield Village Golf Club. Manning, the retired NFL quarterback, was happy to be along for the ride, and he spent a majority of the time heading toward the ropes to sign autographs and take selfies.

“For anybody who loves golf, it’s a real thrill,” Manning said.

For Woods, it was standard fare, but also offered a peak at his form after he missed the cut two weeks ago at the PGA Championship. Coming off his Masters victory last month, Woods had not played competitive golf until the PGA, where he missed the cut by a stroke but was 17 strokes behind eventual winner Brooks Koepka.

Afterward, Woods suggested that “he needed to start feeling better” and acknowledged Wednesday that he had lost weight.

Manning knows all about dealing with injuries and surgeries. He had serious neck surgery before returning and leading the Denver Broncos to a Super Bowl victory in 2016.

“I don’t think anybody can speak for what he went through from a physical standpoint injury-wise,” Manning said of Woods. “Only you know what it feels like. I only know how hard he worked. I know he had to stop playing for awhile. I had to stop throwing at one point. I didn’t like seeing the way I was throwing. I had to stop and restart and I think that’s sort of what he did.

“I think the most impressive thing is how he’s been able to adjust and be adaptive to playing in a new physical state. That’s kind of what I did. Maybe use the baseball analogy — I couldn’t throw the 100-mile-an-hour fastball anymore, but you could still work the outside edges of the plate and you could still strike a guy out that way. He struck a lot of guys out a few weeks ago down there at Augusta and came home with the win. That to me is the most impressive thing, is how adaptive he’s been. And as a golf fan, it was great watching him that Sunday.”

Manning is an avid golfer himself and has a 3.4 handicap index, with two courses in Colorado and one in Tennessee where scores have been posted. He was also extended membership at Augusta National after retiring from football.

Woods has been busy since missing the cut at the PGA. He spent two days practicing at home last week prior to heading to Pebble Beach for a practice round on May 23 at the site of the U.S. Open, where he won in 2000 but had not played since the 2012 AT&T Pebble Beach National Pro-Am. He also spent time at his foundation’s charity function in Las Vegas, where he practiced for parts of two days.

“Pebble was wet and rainy and cold when we played,” said Woods, who played the practice round with Rob McNamara, who works for his company. “It was playing really, really long. Probably a little bit different come tournament time. The rough wasn’t quite up yet. It’s got a couple more weeks to come in. I hadn’t played there in a few years and forgot how small the (green) complexes are.

“You add a little bit of firmness and speed to them, they get really tiny. Seeing some of the new greens they had re-done and being able to look at the new pins was nice to see. Come next week, when I start concentrating on Pebble Beach, it’ll be nice to have those images.”

Woods enters the Memorial ranked fifth in the world. He tied for 23rd at the tournament last year and will be grouped with Justin Rose and defending Bryson DeChambeau for the first two rounds. They tee off at 8:26 a.m. Thursday.