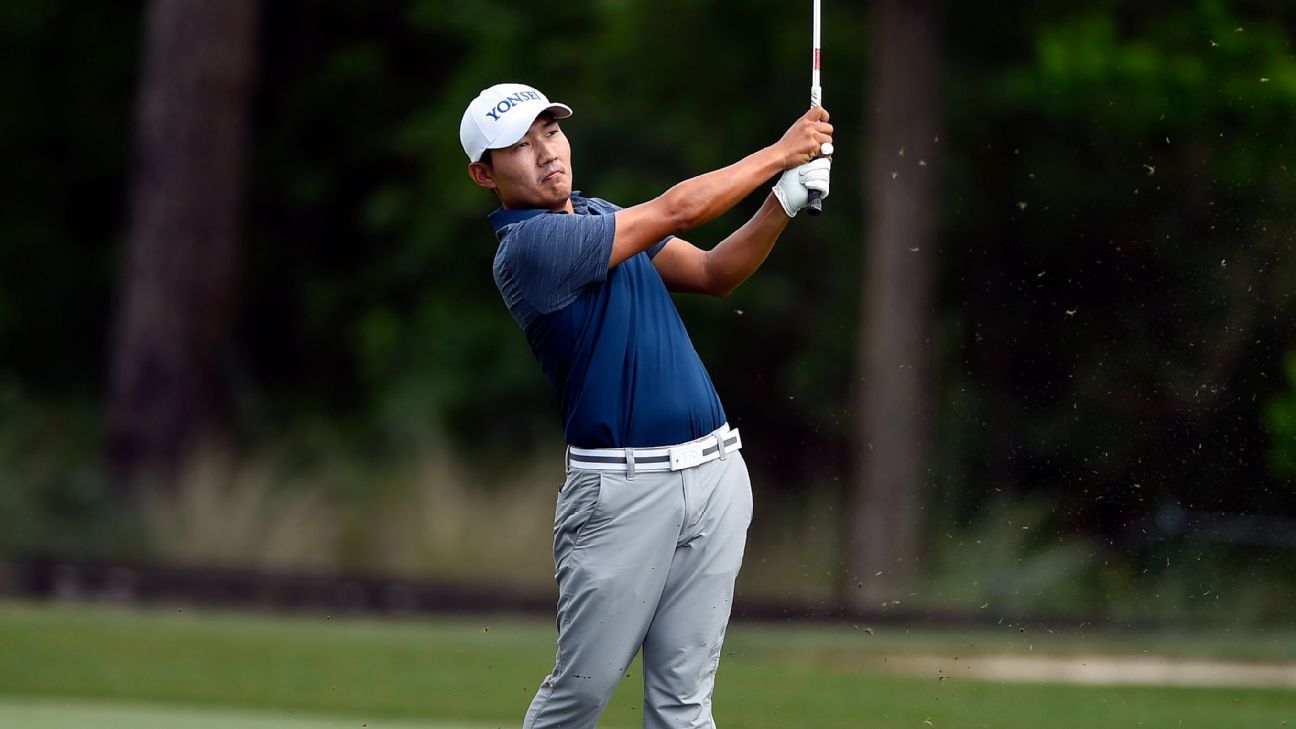 DALLAS — Sung Kang and his caddie did some calculations on the driving range before the second round of the Byron Nelson on an unseasonably cool day with some breezy conditions.

“The biggest thing was we needed to figure how shorter the ball is going to fly,” Sung said. “So we just trusted the number … just hit it, and then [it] worked out good.”

Kang was pretty much right on, matching the Trinity Forest course record with a 10-under 61 on Friday to take the lead at 16 under. He led by four strokes over playing partner Matt Every, who had his second consecutive round of 65, and Tyler Duncan (66).

Brooks Koepka, the world’s No. 3-ranked player who goes to next week’s PGA Championship as defending champion, was fourth at 11 under after a 66. He overcame two early bogeys with six birdies in an 11-hole stretch that included four in a row late.

“Solid round, just trying to keep pace,” Koepka said. “I would like to have been in the lead. But I mean, hey, 61 today was pretty darn impressive.”

Koepka was a stroke ahead of Rory Sabbatini, who had a bogey-free 65.

With temperatures in the low 50s, Kang opened with a 9-foot birdie on the par-5 No. 1 hole. His approach to within a foot of the cup at the 311-yard No. 5 set up a string of six birdies in a row.

“I don’t know what the guys are talking about. Perfect and awesome and nice conditions for the course,” Kang said jokingly after getting a post-round fist pump from Jordan Spieth, a member at Trinity Forest who shot 67 to get to 7 under.

Kang had three more birdies in four holes on the back nine. His only par in that stretch was at the 441-yard par-4 15th, where the 31-year-old South Korean — who lives in North Texas — had his putter raised in the air in anticipation of another birdie. The 21-foot chance instead lipped the cup.

“My 67 doesn’t look so good,” the beanie-wearing Spieth said, comparing his to Kang’s score. “But going out today, if you had offered me 4 under, I would have taken it.”

First-round leader Denny McCarthy followed his opening 63 with a 77.

Tony Romo, the CBS NFL analyst and former Dallas Cowboys quarterback and also a Trinity Forest member, was 8 over after a 74. He missed the cut, like he did in two other PGA Tour starts in the Dominican Republic, and tied for 148th in the event that began with 156 players.

The only bogey for Every came at the 606-yard 14th hole, where his tee shot settled in the lip of a fairway bunker. Every slung away the rake that was by the bunker when he got there. He then hit the ball, which didn’t go nearly as far as the helicoptering club that he then threw in disgust.

“Nothing I can do about it except get mad and complain, which I did,” he said. “Other than that, it was good.”

At the par-3 17th, Every’s tee shot landed on the green in a good position, but it rolled off and down the hill into some rough. He saved par after hitting to 8 feet.

While Every didn’t get as much as he would have wanted out of those two tee shots that he called his best shots of the day, he still had an impressive round “drafting off of Sung all day, really.”

After his near miss at No. 15, Kang’s tee shot at the 382-yard 16th went into a bunker, but he blasted to 11 feet and made birdie. He just missed a 24-foot birdie chance at the par-3 17th, and finished with a 14-foot par to match the 61 Marc Leishman had last year in the first Nelson round played at Trinity Forest after the tournament moved from Four Seasons.

Spieth again got off to a solid start before making his turn off a double-bogey — at No. 9 during his opening 68 and at the 494-yard 18th on Friday, when he had an approach shot roll back down a swale toward him. He then birdied No. 1, and had three more birdies over the last five holes.

“It was nice to bounce back,” said Spieth, without a top-20 finish this season and without a win since the 2017 British Open. “That’s nice as you go into a weekend. Good momentum.”