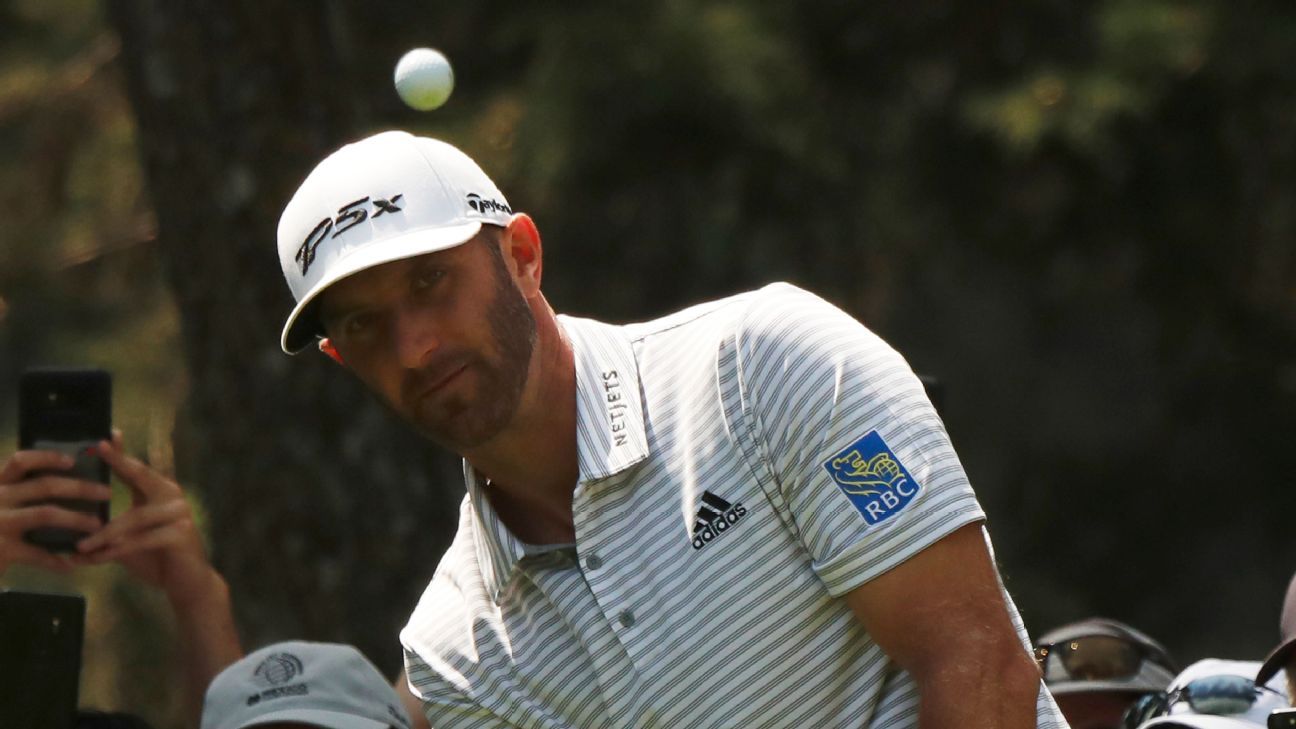 MEXICO CITY — Dustin Johnson was cruising along Saturday in the Mexico Championship until one swing put him in a bad spot, and the next shot made it even worse.

For all that went wrong, Johnson knew everything was right with his game. There was no need to panic, and he didn’t.

Johnson responded to his double-bogey on the 10th hole with two straight birdies. He made two more birdies sandwiched around an up-and-down par from 105 yards, and he wound up with a 5-under 66 that gave him a 4-shot lead over Rory McIlroy going into the final round.

“I knew I was playing well, so I didn’t really let it bother me,” Johnson said. “I felt like I was swinging good, and I knew I could make quite a few birdies coming in. So it was one of those things where it was unfortunate, but I felt like I kept my focus and played really solid coming in.”

The 10th hole was his first score worse than par at Chapultepec Golf Club this week. And it was his last of the day.

McIlroy, suddenly back in the game, could not get any closer and had to settle for a 68.

“It’s going to be tough, especially against D.J., who is arguably the best player in the world,” McIlroy said. “So I’m going to have to go out there and just play a good round of golf, and hopefully that’s good enough.”

Johnson was at 16-under 197. No one else was closer than seven shots off the lead.

Tiger Woods pulled within four shots after Johnson’s blunder, but his hopes ended on the greens.

Woods had a 5-iron from the middle of the fairway on the par-5 15th, put it into a bunker, blasted out weakly to 25 feet and four-putted for a double-bogey, with the last three putts from just outside 3 feet.

He followed that with a three-putt bogey on the 16th and a birdie on the final hole gave him a 70. Woods, who hit 16 greens in regulation, was 10 shots behind and in no mood to speak to anyone after the round.

This is the sixth time Johnson has had a lead of at least three shots going into the final round on the PGA Tour, which doesn’t include the four-shot lead he had at Pebble Beach in 2009, when the last round was called off by rain.

Anything is possible with Johnson, and McIlroy saw that Saturday.

Coming off back-to-back bogeys to fall eight shots behind through eight holes, McIlroy rolled in a 35-foot birdie putt on the ninth hole. He followed with a flip wedge to short range for birdie on No. 10 while Johnson was chopping his way to double-bogey.

Johnson’s problems started with a drive to the right into the trees. He had a gap through the branches and a lob wedge in his hand, but the ball shot out high and hit a tree limb, going into the bushes. Johnson got a break when he was given free relief from a sprinkler line, though the lie wasn’t much better, and the next shot smacked a tree trunk and headed into the bushes. He did well to punch that onto the green and two-putted from 40 feet for double-bogey.

While McIlroy has little choice to attack in the final round, it might not be all up to him.

“You can see how quickly things can change,” he said. “D.J. hits it a little right on 10, and he makes double. It’s easy to do that around here. So it’s going to have to be a blend of aggression and patience.”

McIlroy did his best to hang around. He made back-to-back bogeys on the front nine that put him six behind and then ran off three straight birdies to close the gap. He missed a 3-foot par putt on the 14th hole and was suddenly left a tall order for Sunday.

It’s even tougher on everyone else.

Masters champion Patrick Reed finished with three straight birdies for a 64 and was in the group seven shots behind with Patrick Cantlay (65), Sergio Garcia (69) and Cameron Smith (68).

Reed started birdie-eagle and missed plenty of short putts. He said he would need as many opportunities on Sunday and a better score.

“It’s going to take a really special day tomorrow,” Reed said. “I don’t think 7 under is going to get it done. I’m thinking it’s going to at least take 10 [under] to maybe even a 59 depending on how he finishes the day.”

Johnson had a 2-shot lead to start the third round over McIlroy and Matt Kuchar, whose hopes for a Mexican sweep of PGA Tour events fizzled with a 79. Johnson seized command on the second hole, when he hit a driver over the trees on the 367-yard hole, hopped it onto the green to 4 feet and made the putt for eagle.

He holed a 10-foot birdie on No. 5 and kept getting looks at medium-range birdie attempts without making them.

The 10th hole was merely a detour.

“D.J. is playing very well. He seems to be comfortable on this golf course. He’s going to be very tough to beat,” McIlroy said. “Tomorrow I’m going to have to go out there and probably shoot something similar to what I shot the first day [63] to have a chance.”

Johnson, the only player to capture all four World Golf Championships, is going for his sixth WGC title and his 20th career victory on the PGA Tour, which would make him a lifetime member at age 34.