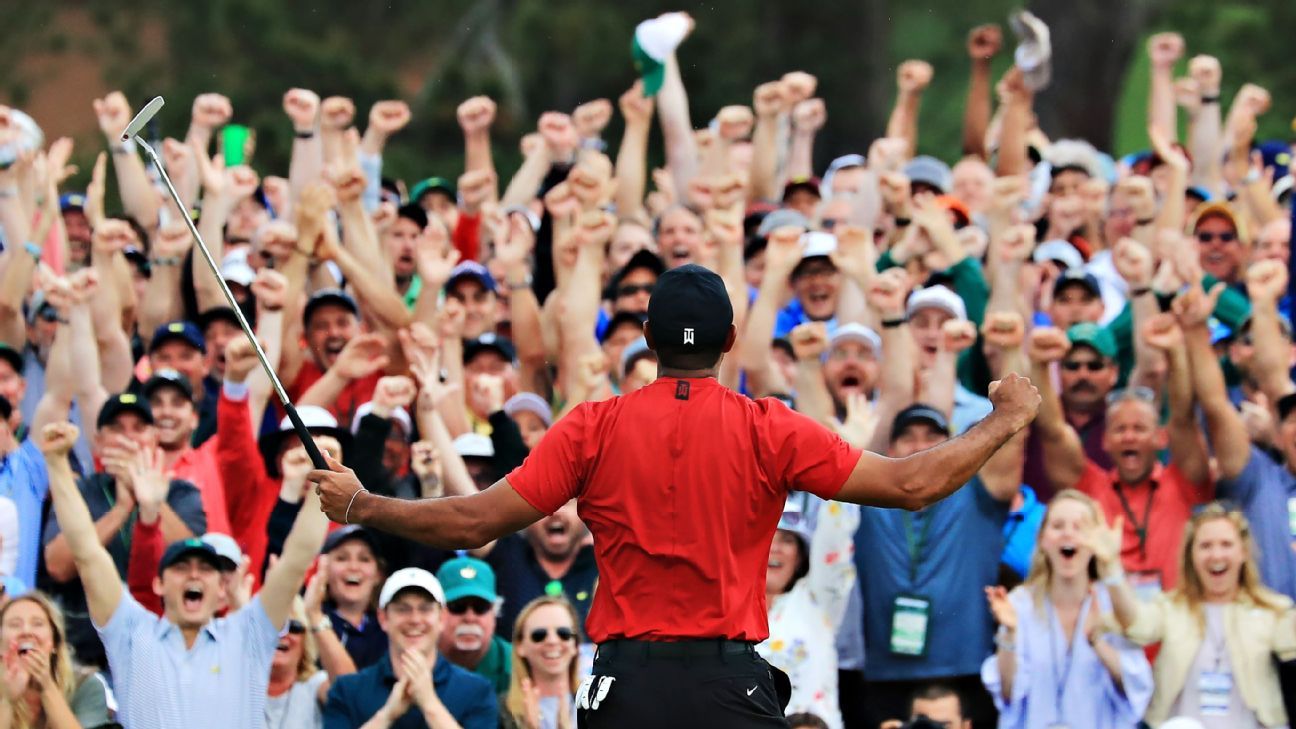 AUGUSTA, Ga. — Past winners of the Masters gathered upstairs in the champions’ locker room because they understood what they were watching and knew they needed to do something special for Eldrick Tiger Woods. Bernhard Langer, Bubba Watson, Zach Johnson, Adam Scott — they all realized they could not just close up their lockers, say their goodbyes and jump into their luxury cars for a ride back to their privileged lives.

Langer, 61, was the group elder, the leader of the band. The former winners showered after their rounds, shared a drink and watched Woods play the 72nd hole on TV.

“We heard a big cheer,” Langer said, signaling the end of one of the greatest American sports stories ever told. “And we all said, ‘Let’s put our jackets on and go down there and congratulate him.’ And that’s what we did.”

Langer played in the 1986 Masters, won by 46-year-old Jack Nicklaus for his sixth green jacket and 18th and final major. Now here was the 43-year-old Woods winning jacket No. 5 and major No. 15 after a drought of 14 years for the Masters and a decade-plus for the majors. Langer wouldn’t rate one feat superior to the other, but he didn’t need to. The two-time Masters champ made sure he was wearing his green jacket when he shook Woods’ hand.

“This is a very special moment in the history of the game of golf, and of Augusta, and of Tiger himself,” Langer said.

Nobody who was here on this surreal Sunday will ever forget the way the earth moved or the way the roars rose above the towering pines. Nobody will ever forget the scene of Woods’ son, Charlie, falling into his father’s arms like Tiger fell into his father’s arms after his record-shattering, barrier-blasting victory as a 21-year-old in 1997. Woods had said his children thought of him as a “YouTube golfer,” as a dynastic force on internet highlights and video games but as something entirely different in the flesh.

The back injuries and ineffective surgeries had left Woods imprisoned by debilitating pain. He couldn’t walk or sit down or lay down or pull himself out of bed. The epidurals and cortisone shots provided him no relief.

“They only knew that golf caused me a lot of pain,” Woods said of his children.

His daughter Sam and Charlie were there at Carnoustie last summer when their father — miraculously contending after a desperate spinal fusion surgery saved his career — blew his Sunday lead at the Open Championship and lost his man-to-man duel with Francesco Molinari, who started the final round of this Masters with a two-stroke lead.

“I wasn’t going to let that happen to them twice,” Tiger said.

Woods was also not about to let Brooks Koepka, another serious Masters challenger, beat him the way Koepka did at the PGA Championship. A blind believer in his chances, Tiger woke up in the dead of night to prepare his altered body for a battle that would start at 9:20 a.m. local time because Augusta National’s elders wanted to beat the forecasted storms.

Woods refused to let anyone or anything rain on his parade. He suffered consecutive bogeys at Nos. 4 and 5 to fall three back of Molinari and appeared destined for yet another major near-miss. But Tiger’s caddie, Joe LaCava, started cursing out his player. Then Woods ducked into a restroom and cursed out himself before emerging a new man.

LaCava had told him earlier, “Never lose the tenseness, but be loose out there. Don’t carry the weight of the world on your shoulders.”

Woods remained poised the rest of this indelible trip. He waited for Molinari — usually a man of steel — to crack under the pressure. And crack Molinari surely did on the 12th hole, where he sent his ball into the creek. Tiger fans watching from the tee box started cheering and high-fiving one another. The whole ballgame had changed, and as the rain started to fall and the green-and-white umbrellas started to pop up all over the course, those giddy fans marched through the trees as if the sun were out and the skies were perfectly blue.

Molinari clipped a tree and found the water again on the 15th, where Woods safely landed his 5-iron second shot on the green at the par 5. Tiger’s first memory of the Masters was watching Nicklaus celebrate his 4-iron shot on that same hole 33 years ago.

“I had never seen anybody celebrate an iron shot into a green before,” Woods said.

He also remembered Nicklaus wrapping an arm around his son and caddie, Jackie Jr., as they walked triumphantly off the 18th green.

Woods was headed for his own father-son moment after his birdie on the 15th gave him the lead at 13-under. But first, Tiger had to hit the kind of shot on the 16th that Nicklaus hit in ’86. On the tee box, with Molinari looking out on his feet after his disastrous double-bogey, Woods turned to his caddie.

Woods was simply showing the same cockiness a 46-year-old Nicklaus showed his caddie with his tee shot in midflight on the 16th.

“Be right,” Jackie shouted that day. “It is,” his father said as he bent over to pick up his tee.

Jackie was on the Augusta National grounds Sunday when Tiger actually hit his shot a bit closer than Nicklaus hit his. As they approached the green, Woods playfully asked LaCava to take a look at his putting line. “Take a look?” the caddie said incredulously. “It’s a foot and a half.”

Woods went for it at the Masters in a way he hasn’t since his last victory in 2005, when he made the signature shot of his career — his magical, mystery chip-in — on that very 16th hole.

Tiger Woods reflects on what it means to win his fifth Masters, saying that it’s a tournament he will never forget.

The walk up 18 represented nothing short of golf’s answer to a religious experience. People who had attended dozens of Masters couldn’t recall the crowd being so deep along the fairway and around the green. It seemed there wasn’t a man, woman or child in the house who was rooting for anyone but the balding terminator in red.

Woods knew bogey would still win, but also knew Arnold Palmer once doubled the 72nd hole to lose the Masters. Tiger wasn’t about to pull an Arnie. As he stood over the tap-in that he will replay in his mind a trillion times this week alone, Woods told himself, “Come on. Just keep it together. Keep focused. Commit.”

The gallery that had been as quiet as an empty church at midnight whenever Woods prepared to play a shot exploded when the final putt dropped, and the winner pumped his fist and emphatically threw his arms in the air as he let out a liberating scream from his toes. Tiger had beaten the two men who had denied him major victories last year — Molinari and Koepka — and he couldn’t have cared less. He wanted only to hug his mother, Kultida, who had spent the final round in the clubhouse screaming deliriously at her son’s image on TV. Tiger wanted only to hug his two kids.

Wearing his dad’s colors, the red shirt and black cap (though Charlie’s was turned backward, of course), Tiger’s son raced to his father behind the 18th green. Tiger lifted him into a bear hug. Neither father nor son wanted to let go. Fans were soon chanting Tiger’s name as he headed for the scoring room, cutting through what Koepka called “a monsoon of people.” Tiger thanked them by reaching out and slapping their hands. He was congratulated at the end of that walk by Langer and other former champs in their green jackets, and by Koepka and fellow young guns who grew up idolizing him.

“It was the coolest thing to see all those players greet him,” PGA Tour commissioner Jay Monahan said. “They’ve all competed against Tiger. And they’ve all lost to him.”

Before Woods made his way in his green jacket from the Butler Cabin ceremony to the practice green, where he lifted the trophy and smiled wide for the cameras, his longtime aide, Rob McNamara, stood outside the clubhouse and cited last fall’s victory at East Lake as critical to how the day unfolded.

“Mentally,” McNamara said, “winning the Tour Championship was everything.”

As Woods left the photo shoot on the green and headed for a gray van, fans chased after him and all but stampeded last year’s champion, Patrick Reed, who went ignored as he weaved his way through the traffic. In the parking lot, wearing a Saquon Barkley T-shirt under his Masters jumpsuit, LaCava sat in the cargo area of a black Mercedes SUV with the yellow flagstick from the 18th hole tucked safely behind him. The caddie didn’t want to talk about Woods only as a renewed champion; he wanted to talk about him as a renewed man, too.

“He’s high-fiving people, he’s talking to people, he’s signing autographs,” LaCava said. “He’s much more fan-friendly, which I think is awesome. He’s great with the kids, talking to guys in groups more … and everybody out there is pulling for him. How many guys did you see sitting there waiting for him on 18?”

This was instead the time to measure Woods, the man, against his younger self. Tiger put a lot of people through hell, especially his former wife, and could have seriously harmed himself, or someone else, on the night of his DUI arrest in 2017. Woods told everyone he was done as a golfer two years ago, and then survived what he called “some really dark, dark times.”

So he was a much easier Masters winner to celebrate this time around. Woods won his 15th major title, one more than his father predicted he would win back in his son’s amateur days. Tiger heard his dad’s voice out there on a couple of greens Sunday.

“Just putt to the picture,” Earl would say, and his son did as he was told.

Before Tiger’s children were driven away from the club in that black Mercedes at 4:16 p.m., LaCava’s flagstick was loaded into another SUV that was presumably waiting for Woods. Tiger would leave Augusta National with a souvenir and a memory that could last three lifetimes.

Charlie and Sam saw their pops win, Tiger said, “just like my pops saw me win here.” The Woods children and an entire generation of boys and girls discovered something Sunday they never really knew.

Eldrick Tiger Woods is not a YouTube highlight, or a video game superhero. He is a very real golfer, the kind we will never see again.