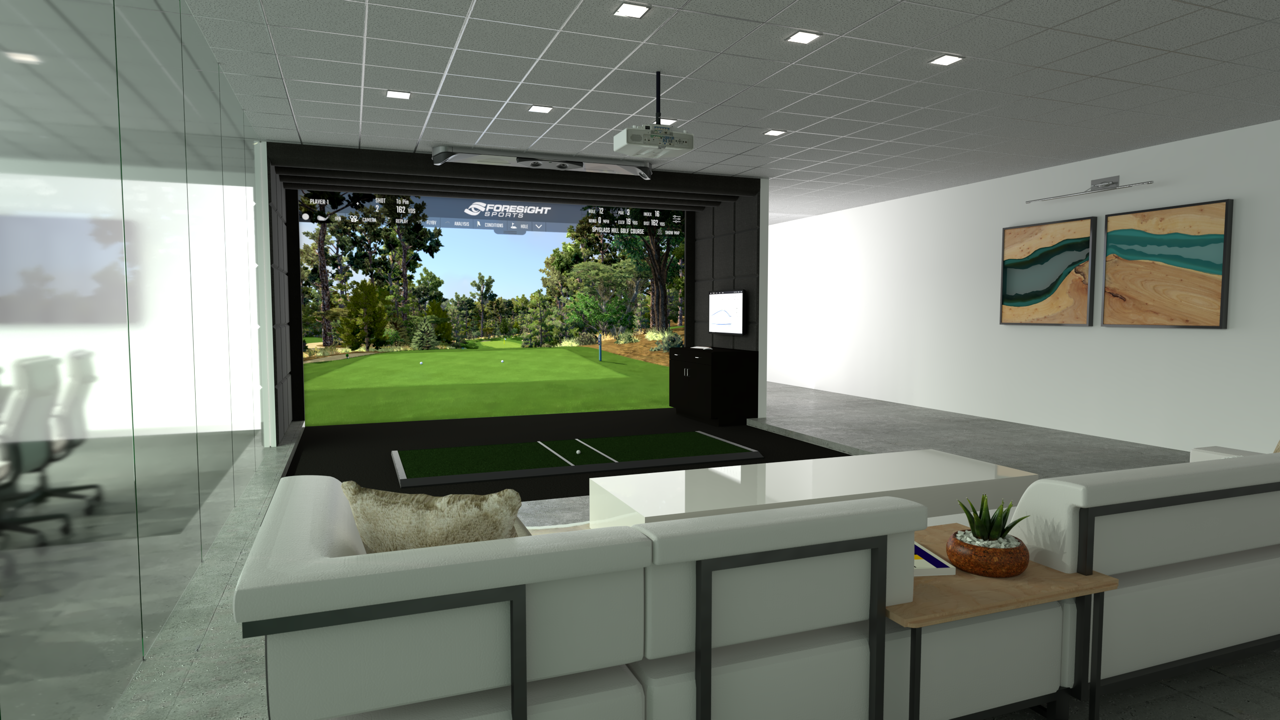 Rory McIlroy posted a video of himself hitting golf balls on Instagram with the caption that said it was the first time in seven weeks he had practiced since the coronavirus pandemic shut down golf. Shane Lowry posted a video chunking a short shot into a bunker exclaiming that’s what happens when you take six weeks off.

Tour pros around the world have taken this hiatus from tournament golf in their own ways. Some stopped practicing all together, some focused on their fitness and some found distinctive ways to compete outside of the golf course.

Not everyone is McIlroy, though, so plenty of the Tour players took this time to try to keep their swing intact for when tournaments do come back on and to ensure there isn’t too much of a ramp-up period to their game.

So how do you do that with stay-at-home orders in place and social distancing requirements abounding? You turn to technology to get you through, and that’s what plenty of golfers across the globe have done.

Chris Trott, TaylorMade director of sports marketing, spends a ton of time with the tour pros and has spoken to most of those with ties to the company about how they’re using this time off. As the date approaches to the first tournament on the revised PGA Tour schedule — June 11 at the Charles Schwab Challenge — more and more golfers are starting to use technology to make sure they are dialed in.

“Lucas Herbert said he can go eight weeks without hitting shots, that he feels he can return and have some form of knowing where the club face is,” Trott said. “But after eight weeks, he has to start putting in what he described as a ‘full practice day,’ rather than knocking some rust off.”

There is probably no one else on tour more dialed in to technology and numbers than Bryson DeChambeau, who has been working on his game at home with an HD golf simulator, a launch monitor from Flightscope that spits out all the measurements and data he needs from his golf swing, and a full gym setup at his house.

He has not done anything competitive on the golf course during this downtime and has taken the opportunity to sharpen his Fortnite skills, even raising $25,000 for charity. But that doesn’t mean he hasn’t been practicing and making sure he still has his swing where he wants it.

“I really started playing well in February up until the stop of play,” DeChambeau said. “I was happy where my game was at and definitely felt like I was trending in the right direction towards some big things before we stopped. I will always work on different parts of my golf swing to improve. That will never stop.”

He is still adding mass, as well, working out anywhere from two to three hours a day saying the stronger he can become, the more stable his body will be with the ability to swing faster.

Without any other set of eyes on his ball flight or swing, he has used technology to help make sure those gains in mass are translating into his swing.

“Over the past few months I’ve totally changed my training habits, with a real focus on getting stronger,” DeChambeau said. “FlightScope helps me prove that the results I’m seeing in the gym are translating into real gains on the course.”

TrackMan is another popular product tour players use to help dial in their numbers. A radar-based technology that can track spin rate, club speed, attack angle, launch angle, ball speed, carry and much more, TrackMan boasts that 87 of the top 100 players in the world have purchased one of their devices.

A majority of those players are utilizing a form of TrackMan’s combine, which is a standardized test consisting of 60 shots at 10 targets. The targets go in order from a specific distance to give you clear look at where your deficiencies are from certain situations and what yardage you still aren’t 100% dialed in on.

Patrick Reed is someone who used the combine to sharpen his skills and has posted some ridiculous numbers on TrackMan’s leaderboard.

Lance Vinson is the PGA Tour rep for TrackMan and says the most common use for the Tour pros right now is creating their own test within the combine to figure out where exactly they still need help.

“The combine is something a lot of players use in this time to quantify how they’re hitting it,” Vinson said. “I would say three-fourths of our Tour pros use some sort of test center where they’re getting a score based off of proximity. You can’t replicate going on the golf course in tournament rounds until there are tournaments, so keeping your skills sharp has guys hitting into bed sheets using the TrackMan, or whatever they have, but they’re still staying sharp by using it at their house.”

TrackMan also recently launched a virtual tournament with European Tour players that allows anyone to compete with the professionals on a virtual leaderboard.

The company is used to dealing with Tour players as well as private country clubs and retail golf centers, and despite demand slowing down in those areas, the individual consumer demand is on the rise.

“In the trade, a golf club might get two to four units, a golf center might get six, sometimes eight, whereas everything is one at a time now,” TrackMans’ vice president of sales and business development, Matt Frelich said. “The demand is there, marketing when they send their reports out now with leads, it’s up. The trade is flat relative to the upside from the consumers.”

Using technology at home doesn’t mean the players are on an island and without their coaches, though, as more and more instructors are adapting to video conferencing to help keep their players on point.

Jeff Smith is a Callaway tour coach who works with Patrick Rodgers and Aaron Wise, among other players. He had already used Zoom video conferencing before the pandemic hit, especially with collegiate athletes who might not be able to travel to Smith’s home in Las Vegas.

During this time, however, he has used video conferencing to teach and instruct more than ever.

“The technology that we use is basically some analysis software that allows us to take videos of their swing and upload it into the analyzer,” Smith said. “As I connect with them via Zoom, I’m able to share my desktop computer with them and I’m able to illustrate positions they might need to be in and it helps model the correct movement behaviors. Most of them have facilities in their house where they have a golf room, a lot of these guys have simulators in their house and the ones that don’t have built something in their backyard with hitting nets or mats.”

The Tour pros aren’t the only ones with simulators and nets and mats anymore. Average golfers are also looking for ways to keep active and maintain their swing during this downtime.

Foresight Sports is a company that offers launch monitors and simulators to both professional golfers and the average player. With technology that can monitor almost every aspect of a golf shot, Foresight Sports is used by Rickie Fowler and approximately 170 other Tour pros over the years to monitor their stats.

But the company also offers something called sim in a box, where a consumer can order an entire setup for a simulator that comes with either a net or impact screen, projector, computer, flat-screen TV, turf and a launch monitor to build your own simulator in your house.

The company, much like other technology companies have seen a boom in sales that has resulted in selling out of a few of the launch monitor and sim in a box package because of the demand.

Not every company is in the same boat as demand continues to rise as people are staying home and social distancing.

SkyTrak, another company that offers a launch monitor and simulator options, have been on backorder and are catching up with orders. James Cooke, director of marketing, said March was unlike any other month for the company as consumers flocked to the site to try to purchase the launch monitors.

“It was unlike any month I’ve experienced since working at SkyTrak,” Cooke said. “The demand was enormous and we had outreach from all over the place because people were anticipating being cooped up. It’s been incredible at this interest people have put into us over the last five to six weeks.”

Flightscope launched a new product before the pandemic hit called Mevo+, which had already gained popularity among consumers. Once the stay-at-home orders began, Flightscope marketing manager Tyler Burnett said the company faced some unique challenges to keep product in stock.

The launch monitors are produced in South Africa and the country was put on a very strict lockdown, so Flightscope had the product made at the facility and ready to ship but couldn’t ship it because of the lockdowns.

“South Africa is loosening the restrictions, but over the last few weeks they’ve had some of the toughest restrictions or lockdowns in the world, so it’s been a little tough for us to get our production team back in there,” Burnett said. “We were able to get back at a limited capacity, about 40% last week, so we should start receiving some stock in the next couple weeks.”

Despite being on a 14-week delay, orders are still coming in from consumers. The company is currently on a back order of approximately 2,000 units.

No matter if it’s an average golfer or a tour pro, the demand for at home solutions has soared.

Even though some of the world’s best are taking the time off to relax, quite a few are now starting to get back into the mindset of competitive golf.

Trott has continuously stayed in contact with the tour pros TaylorMade represents, and while Jon Rahm has taken this opportunity to focus on engaging with his social media following and creating a zen-like headspace, all of the players are moving into that tournament mentality.

Technology has helped them get to this point and will continue to help them as we ramp back up toward competitive golf.

“I think a great point to get across here is that when we go back, we’re very much hitting the road in a very different way we have thus far for the simple fact that these boys aren’t going to need massive tweaks in equipment because they’re kind of already in a place where they’re good to go,” Trott said. “They were dialed in, but it’s a bit like a horse in a sprint. You’ve got to stop, that’s a fun way, so it will be interesting to see how this will go, but I think discipline will win out with these guys and how disciplined they’re being with their game.”