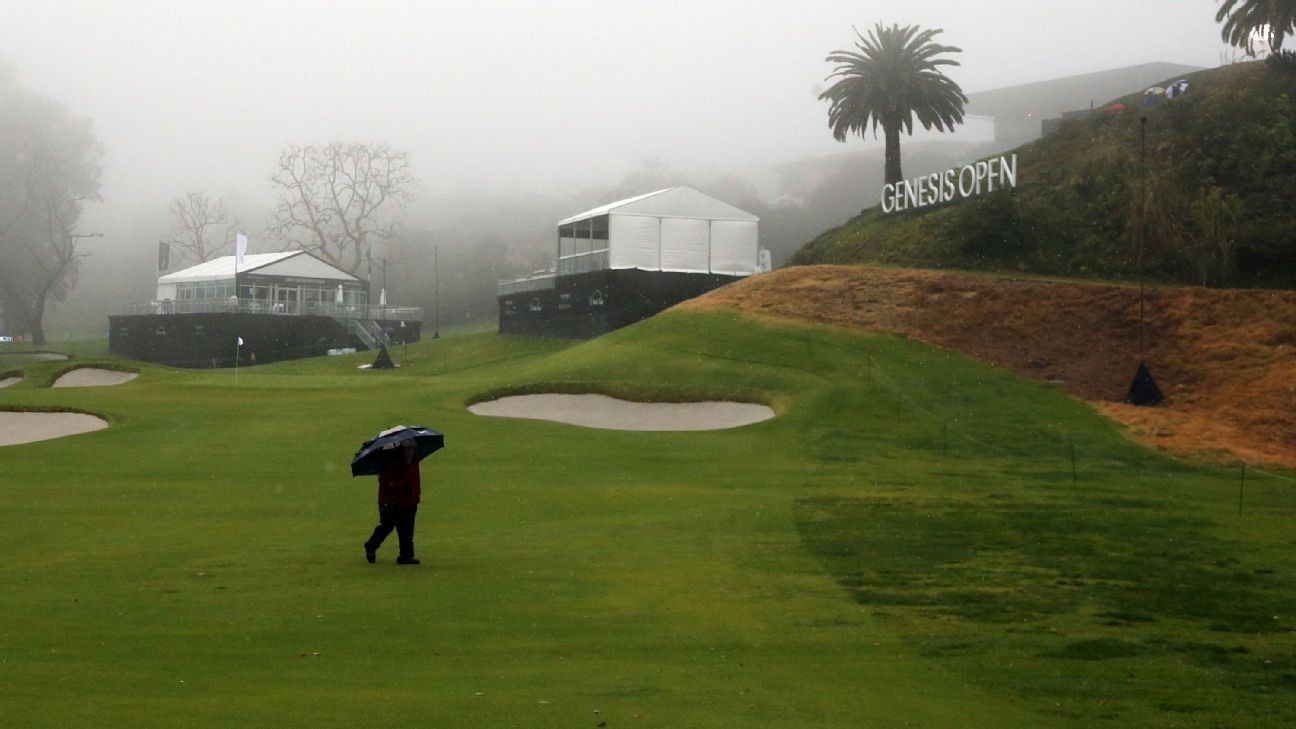 LOS ANGELES — A balmy, comfortable week in Southern California it was not. Unfortunately a big part of Genesis Open (Los Angeles Open going back to the 1920s) history has seen weather become a big part of the story. Somehow the tournament concluded Sunday.

Nothing gets the blood boiling more than watching J.B. Holmes labor over every shot in a round of golf. The reason it is not discussed more is because Holmes is not frequently on TV, where the pre-shot routine becomes a source of astonishment as those not accustomed to seeing him are treated to some painfully lengthy periods before club strikes ball.

All credit to Holmes, who won for the first time since 2015 when he overtook Justin Thomas in the final round. Holmes qualified for this week’s WGC-Mexico Championship in the process (although he said he would skip the tournament).

The social media vitriol was particularly harsh, but for good reason. Holmes has developed a tortoise reputation over the years — and seemingly doesn’t care. You might remember last year’s Farmers Insurance Open, where on the final hole he took four minutes to decide what to do when he needed an eagle to tie — and ended up laying up.

Sunday’s antics were due in part to a very difficult day. Plus, when players are in contention, some extra time will be spent. But his group was never even put on the clock, despite several instances of Holmes taking more than a minute to play a shot. When Holmes, Thomas and Adam Scott were on the 10th green, the group in front of them was nearly to the 11th green — a par-5.

“My thing on slow play is it’s never going to change,” said Scott, who earlier this week pleaded for the PGA Tour to make an example of himself and call a slow-play penalty just to send a message. “Just get over it. Until television and sponsors say, ‘No more money,’ slow play ain’t gonna change.”

The three-time major champion has been making some steady progress with his putting and long game of late but has been unable to put four good rounds together. Sunday was clearly a setback. Starting the final round, Spieth was in a tie for fourth. While he was eight strokes back, he was still in line for a strong finish.

But Spieth’s final-round 81 included a double-bogey, a triple-bogey and a quadruple-bogey. The quad came at the par-4 10th, where he needed five bunker shots. He shot nines of 41-40, chipping in for a par on the last hole. It was the third score of 80 or higher in his professional career on the PGA Tour and left him in a tie for 52nd.

Spieth did not speak afterward but did say Saturday that two straight weeks of lousy weather and long days were not the best way to snap out of his playing issues.

“Ideally for me right now, the more full kind of free flowing full high ball swings, something like next week [in Mexico] is actually better for me,” he said. “And the sawed-off shots you need to hit are just much more difficult because my timing’s a bit off, so that makes it certainly a challenge.”

The conditions were brutal, the days long, but Justin Thomas is the first one to admit he should not have let this one get away. He had a four-shot lead through 54 holes and looked unbeatable. Rounds of 66-65-65 put him out front and there was nothing to suggest he would falter. But he did with a final-round 75 that included two 3-putts and a 4-putt.

“It’s always a bummer to hand [Holmes] a tournament,” Thomas said. “I feel like I should have won that thing. Hit some great shots the last four holes. But it is what it is and I’ve got to find a way to learn from it.”

Thomas admitted he putted poorly at times in the wind.

“I’ve needed to get better at that and it unfortunately just kind of showed a flaw in my mind,” he said.

Few are too worried about Thomas, who would have moved from fourth to second in the world with a victory. His last win came at the WGC-Bridgestone in August. Now he’s headed to the WGC-Mexico Championship, where he lost in a playoff to Phil Mickelson last year.

Once March rolls around, the folks in Southern California will hardly see a drop of rain the rest of the year. But when the PGA Tour is on the West Coast, look out. It was bad last week at Pebble Beach. And it was bad again this week at Riviera.

Not only were players greeted to morning temperatures in the 40s, but a seven-hour delay Thursday meant marathon days on Friday, Saturday, Sunday. It was somewhat remarkable that 72 holes were completed before darkness Sunday.

Players were on the course Sunday morning at 6:45 a.m. local time and the last groups had to play 34 holes. Undoubtedly they are all looking forward to some warmer weather.

Tiger Woods reflects on his performance at the Genesis Open, calling it one of his worst performances ever.

This type of tournament was not a good one for a guy with a bad back. Woods played 30 holes Friday, had a long day at the course to play 14 holes Saturday, and then 28 more Sunday. He looked exhausted afterward, and was not moving along very well. But he still tied for 15th despite playing his last 11 holes in 4 over par. Overall, it should be viewed as a good result.

Riviera has seemingly always given Woods fits. On Saturday morning he appeared headed to a second consecutive missed cut here. But he ended up making it by a shot, got hot over the ensuing 18 holes by shooting 65, moved into the top 5 with three birdies over his first nine of the final round, then faltered.

Woods again lamented his putting, and that is likely to be an ongoing issue at age 43. Getting hot with the putter will remain a challenge. But there’s plenty to like about his ball-striking to this point.

Through eight rounds this year at Torrey Pines and Riviera, Woods’ worst score was the 72 he shot in the final round here. Although he has had only two scores in the 60s, he has navigated some tough courses and tough conditions quite well.

Now we will see how the warmth of Mexico City — as well as high altitude — treats him.