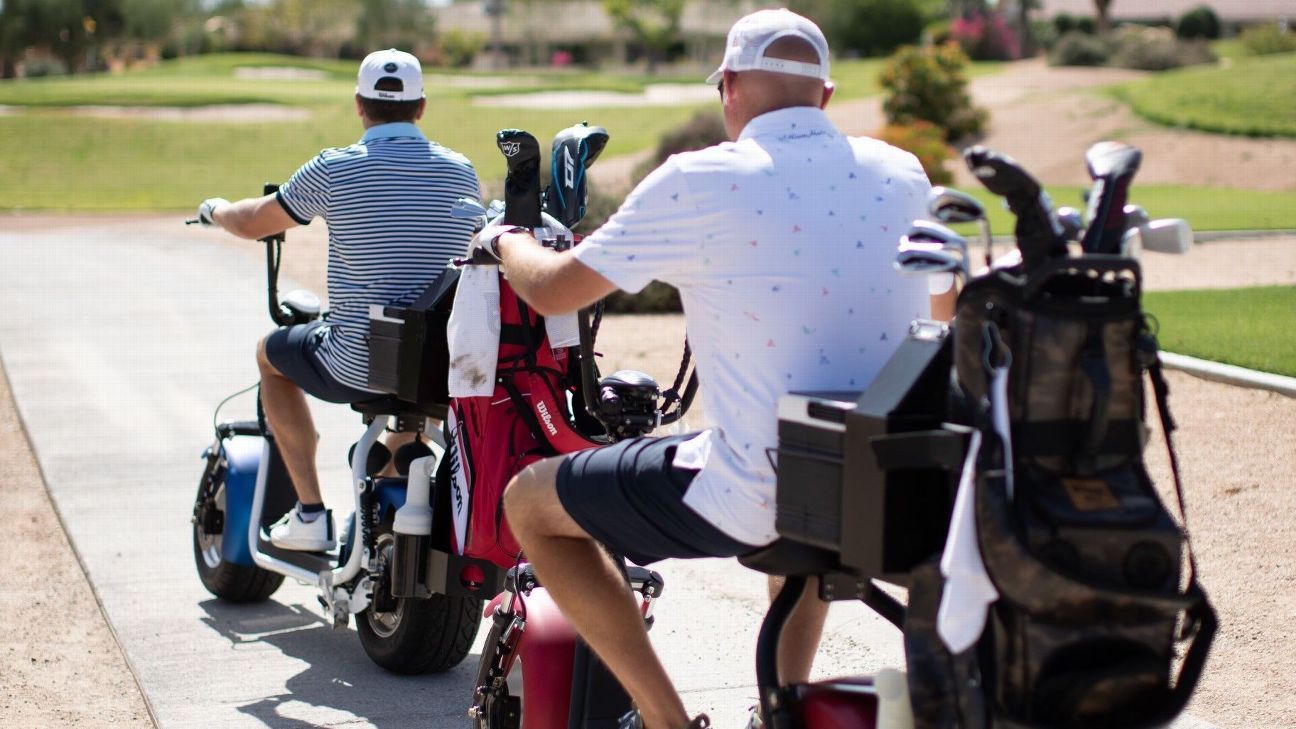 Only a few years ago, Derrick Mains and his staff were fighting an uphill battle trying to pitch golf courses on the idea of a single-rider golf cart. The president at Phat Scooter, which produces a golf-specific scooter meant for one rider, Mains remembers going to the PGA Merchandise Show three years ago hearing that only progressive courses would buy into something so new like an electric scooter.

Fast forward to the present, and companies such as Phat Scooter and Finn Scooters are the leaders in what is becoming the biggest evolution in the golf cart industry.

As courses have been forced to adapt because of restrictions from the coronavirus pandemic, social distancing and keeping golfers safe while still keeping them on the course, single-rider carts could be on the precipice of a pivot point in the industry.

“There’s this question of is this just this season, is it the next 18 months, is this just forever?” Mains said. “Nobody’s really sure what the future holds, and all of the sudden the golf cart is potentially a paperweight or a liability. Even from the courses that would traditionally tell us never in a million years, now all the sudden they’re telling us, ‘Well, maybe we will use them.'”

Phat Scooters has gone from four to five inquiries a month from golf courses to at least one per day. The company had been averaging two to three courses signing up to add the scooters to their cart fleets prior to COVID-19. In the past two months, the company has added 10 or more new courses each month.

Finn Scooters, which offers a single-rider scooter that resembles more of a dirt bike, has seen a similar rise in interest for its product. The idea of isolating a golfer by themself on a cart wasn’t as appealing prior to this pandemic; now it’s become a necessity.

“Finn sales have definitely grown quicker due to social distancing,” Finn president Ed Kowachek said. “We hear of stories like courses checking out all their riding carts by 10 a.m., since they can issue to one rider only, and then need more. So courses need to supplement their rental fleet and what better than a Finn.”

The single-rider carts made a lot of sense before the virus; faster play, more revenue for courses, fun and something new. But now it not only answers all these needs but also naturally accommodates social distancing.

From a revenue standpoint, most courses have built in cart fees in their regular rates. With the scooters, it gives an opportunity to charge a premium, typically around $20 per scooter, on top of the regular rates.

Some of the single-rider cart companies offer a revenue sharing option for courses with a low upfront cost to obtain the scooters. If a golf course or country club buys the scooters outright, the revenue is not shared.

“These things generate me $20-40 a day each, really quickly this is not the liability the golf cart is. This is a positive revenue generator for my course,” Mains said. “We’re seeing a lot more of that and I think to me it’s because owners and managers are more sensitive this year of potential losses. Many of them were shut down for a couple months and are thinking how do I make more money?

“How do I get back to the money I was making before this happened? This is a way to make additional revenues they hadn’t contemplated before.”

Golf courses and private clubs were naturally hesitant of the idea of adding something so different prior to this pandemic. An industry that is traditional and slow to adapt, it wasn’t surprising that a scooter would be rejected in its infancy.

There were a few places that saw the benefit early on, though, and jumped on board. Those courses saw an immediate impact from their members and golfers that led to added revenue, a level of excitement and an improvement in pace of play.

“That was the whole impetus of this as Finn was created by the same person that started and owned Sun Mountain Sports, Rick Reimer,” Finn Scooters public-relations rep Steve Snyders said. “That was his thing — it’s kind of slow, it’s kind of boring, what can we do to pick up pace of play? You go to your ball, you play your ball, you don’t have to zig-zag across the course with two people in a cart where one slices and one hooks the ball.”

The golf courses that got in early on the scooters have already seen the benefits, and have seen an uptick in interest from their golfers in recent months. Shawn Scott, the director of golf at Whirlwind Golf Club in Arizona, has seen the eight Phat Scooters the course has in its fleet rented out daily.

“The biggest challenge in golf right now is pace of play, so when someone plays in three hours and 45 minutes, versus five hours, they want to return to where they played a round that quickly,” Scott said. “When clubs start to get these scooters, or these single-rider carts, I think clubs are going to realize it speeds up play dramatically. It doesn’t sacrifice experience at all — it actually enhances the experience. So regardless of COVID-19, I think overall it’s going to help pace of play and it’s going to be a better experience.”

The companies try to make it as simple as possible for courses and clubs, with options to buy or lease the scooters with revenue-sharing options. They have also made it as safe as possible for golfers, as Finn Scooters has added an app similar to Lime scooters’ that provides a true hands-free rental experience.

Caledonia Golf Club and its sister course, True Blue Golf Club, in Myrtle Beach, South Carolina, are other locations that got in early on the single-rider cart idea. They first added golf boards, similar to a big skateboard with a handlebar, then added Finn Scooters to the fleet.

Bob Seganti, director of golf operations, agrees about pace-of-play improvement but said he believes the fun factor has been the biggest selling point for his club. Though many thought this would be a way to attract younger golfers, Seganti and others have seen an increasing interest from an older demographic.

Caledonia has seen a sizable interest from 35-to-65-year-old golfers, and Seganti believes it has been a marketing home run to advertise that the course has the option to use the scooters.

Getting in early on the golf boards also helped Caledonia get past one of the main hurdles some courses face: the idea that an electric scooter could be more of a liability than a regular cart.

“The single-rider vehicles are actually safer than the people riding around in golf carts,” Seganti suggests. “The reason for that is you have to be engaged; you’re not on your phone or drinking 12 beers through the course of a round. Folks treat golf carts like a jeep in open space, and when you’re on a single rider, you have to be engaged the whole time.”

Both Caledonia and Whirlwind have seen the benefits of faster pace of play, added revenue and the excitement of something new, and Seganti adds that his superintendents are happy as well, because the scooters weigh only 75 pounds. That’s roughly one-tenth the weight of a traditional golf cart, which means less force and impact on the turf and less maintenance for the grounds crew.

Those benefits were all pre-pandemic, and as Mains points out, courses are seeing a strain on their golf cart fleets because they have to rent out carts to one golfer instead of two. They’re more willing to look at alternatives, and as they bring in the single-rider scooters, they are seeing the benefits that should last beyond this pandemic.

It has taken time for the golf cart industry to evolve from gas to electric, so naturally adapting to something as new as a scooter won’t happen overnight. Because of the times and the circumstances, however, the shift is being accelerated and could be the start of the next big change for the industry.

“Seeing the reception in the last eight to 10 weeks has changed my opinion of our golf business,” Mains said. “We’re now recognizing that the pivot point has occurred. We heard from some industry pros that said you’re going to have to be out here for four or five years before people really take you seriously. We now in Year 3, and because of the circumstances, people are taking it seriously.”