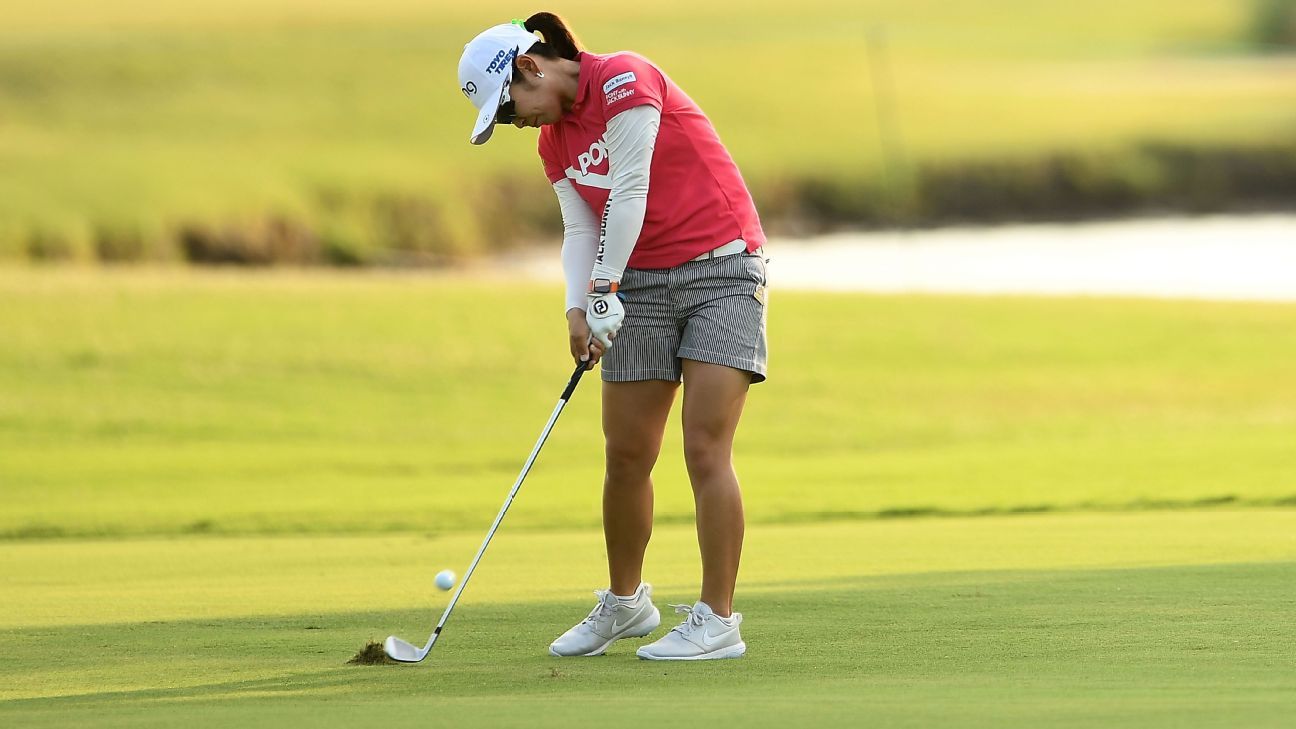 CHARLESTON, S.C. — Japan’s Mamiko Higa shot the lowest round in a U.S. Women’s Open debut, a bogey-free 6-under 65 that gave her a one-shot lead Thursday over American amateur Gina Kim and Germany’s Esther Henseleit.

The 25-year-old Higa tied for the third-lowest round in U.S. Women’s Open history. Helen Alfredsson holds the record with a 63 in the opening round in 1994.

Kim, a sophomore on Duke’s golf team, holed out for eagle from a fairway bunker on her next-to-last hole, the eighth at the Country Club of Charleston, then had a two-putt birdie to close her round of 66.

Sei Young Kim of South Korea and Azahara Munoz of Spain were tied at 68. A group of seven featuring American sisters Jessica and Nelly Korda and another U.S. amateur in Andrea Lee were tied at 69.

Higa has won five times on the Japan LPGA Tour, including a victory in March, but might be best known in her country for marrying sumo wrestler Ikioi last fall on their shared birthdays of Oct. 11.

She qualified for the Open as a top-five money winner on Japan LPGA and being inside the top 50 in the world ranking. Still, Higa didn’t hold much hope that she could succeed on a course she hadn’t played before last weekend.

Higa, though, got going quickly with birdies on the third, fourth and fifth holes. She got streaky again on the ninth and 10th, putting a bunker shot within 3 feet for a tap-in birdie on No. 9 and rolling in a 25-footer on the 10th to move to 5 under before much of the field even got going.

Higa struck once more on the par-3 17th with her tee shot landing inside 8 feet for a final birdie.

“I not only golf, but I enjoy the life here,” she said through an interpreter. “And I just enjoyed 18 holes today.”

The 20-year-old Henseleit was a German youth champion who has had six top-10 finishes in seven Ladies European Tour events this season.

She finished as the first alternate in London qualifying for this event and waited fretfully for several weeks before the call came saying she was in. Like Higa, Henseleit also played without a bogey and moved within a shot of Higa’s lead on the par-5 fifth — Henseleit began her round on the 10th hole — when she put her approach inside 3 feet of the cup for a birdie.

“It’s a completely new experience for me to play here, and the grandstands are huge and very many people around,” she said. “But I don’t feel like it’s too much for me. So I really like that.”

Gina Kim, 19, had a strong finish with four birdies and that eagle in her final eight holes. She was in a fairway bunker on the par-4 eighth hole, 141 yards away, when her approach rolled into the cup. Kim had a 25-footer for eagle on her closing hole, the par-5 ninth, and came a foot or so right before tapping in to become the leading American on the scoreboard.

Kim, who began her round on No. 10, had earlier chipped in for birdie from the bunker on the par-3 17th.

World No. 1 Jin Young Ko of South Korea, who won the major ANA Inspiration in April, opened with a 72, as did defending champion Ariya Jutanugarn. Augusta National Women’s Amateur winner Jennifer Kupcho and NCAA women’s individual champion Maria Fassi both played their first rounds as professionals. Kupcho shot a 71, and Fassi had a 72.

Most of those in the afternoon half couldn’t have liked the dried fairways and greens baked out in a day of hot conditions. There were just six who teed off later who broke par, compared to 18 among morning starters.

Players faced sticky, humid conditions as temperatures reached the mid-90s. Nelly Korda, four shots behind after an opening 69, thought the bright sun combined with the heat was taxing on players.

“I got a little lightheaded toward the end of the round,” she said. “But I drank a lot of water.”

Conditions are expected to remain similar through Sunday.