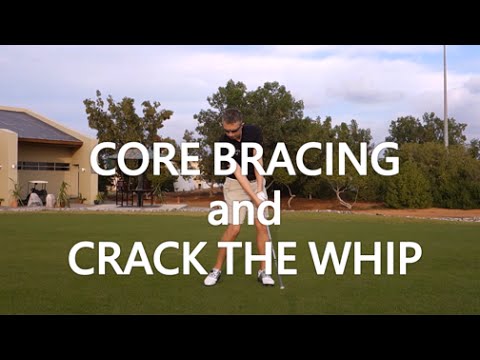 HIPS DECELERATION – CLUB ACCELERATION
PGA Professional Robin Symes explains how the speed of the body is transferred into the speed of the clubhead. He shows a drill to help players feel how the core should brace from the ground up, slowing the body, and accelerating the club.

Transcript
Hi, Robin here. I’ve got a tip to help people gain some club head speed, help people transfer the speed of their body into the speed of their arms and into the club head at impact.
Now, just like cracking a whip, that’s obviously the name of this title, but when you crack a whip, what you do is you accelerate your hand, then you decelerate your hand suddenly, which transfers the speed into the whip just at the right moment. It’s the same with a golf swing. What you’re doing coming down is you’re accelerating your body. Your lower body first, then your torso, then your arms.
And then they decelerate in sequence. Everything starts to decelerate just so the club head can accelerate at the right moment. People who don’t have this aspect in the swing, this deceleration, they look like they put a lot of effort into their swing, but they really get nothing out of it. They look like they’re moving very quickly, but you measure their club head speed and it’s not really up there. It’s actually quite slow.
People who have this transfer of energy and deceleration, they look very smooth with their building up, their par, and their swing. Sometimes they don’t really look like they’re hitting it that hard, but they create tremendous club head speed. So this deceleration and then cracking the whip at the right time, sending the speed into the club head at the right time is a very important part in creating club head speed in the most efficient way. It’s quite a difficult thing to teach, teach somebody how to slow their body down and accelerate the club at the right moment.
But one of the drills I’ve had more success with in this is that I take a club the wrong way around, or even one of those alignment sticks, or there’s a training rod out there, I think it’s called Speed Whoosh. And what I do is I actually am asking them, asking people to take their normal set up, make their normal back swing. And what I want you to do is accelerate your body in your normal way, in the downswing, but then basically try to stop the stick at the moment of impact. Try to make the stick, if it’s got a little bit of flexibility to it, one of those alignment rods, try to make it actually judder a little bit and whip.
Now, in doing that, you’ll start to feel how your body is bracing. To be able to stop the club, you’ve got to brace your body to put the energy into the stick to get it wobbling. Again, a little more advanced is you’ll hopefully start to feel how you’re using the ground. When I’m doing this, I can feel my glutes sort of activating. I can feel myself pushing up from the ground a little bit. It’s a really, you know for my body to hit the brakes, and brace, and transfer the speed into the club head.
So you’re going to start to get a sense of what’s going on from the ground, what’s going on in your glutes, how you’re bracing your body. You might even feel something in your core. And rather than try and explain this, go through the exercise and learn what you feel. That’s the most important thing.

So once you’ve done that a few times, basically you try to have that same sensation when you’re swinging the club at normal speed. So hopefully you get some sense or you can see my body bracing, my core sort of activating, my glutes activating. Using the ground, pushing up from the ground so I can get the speed of the body transferring into the speed of the club head.

As I said, it’s quite an advanced lesson. It’s definitely one of those faults in the golf swing when you have a student who is not decelerating their body, not transferring the speed in the club in the right way. It’s not an easy one. No point pretending that. But definitely this exercise have had some success. If you feel like you’re somebody who puts a lot of effort into your swing but you don’t get much out, I think you could be a candidate to give this a try.

Don’t do the exercise and then try to the get the feeling within a short time, 30 seconds or a minute. Keep doing it until you start to sense what’s going on. Some of those things I’ve talked about, your core, your glutes, how you’re using the ground. Keep doing it until you start to get some of those sensations. Only then switch it over to a regular practice swing, and then hitting some shots. So hopefully some people out there who could get a little bit of benefit from this. Hopefully it helps you pick up a little bit of speed and increase your distance.