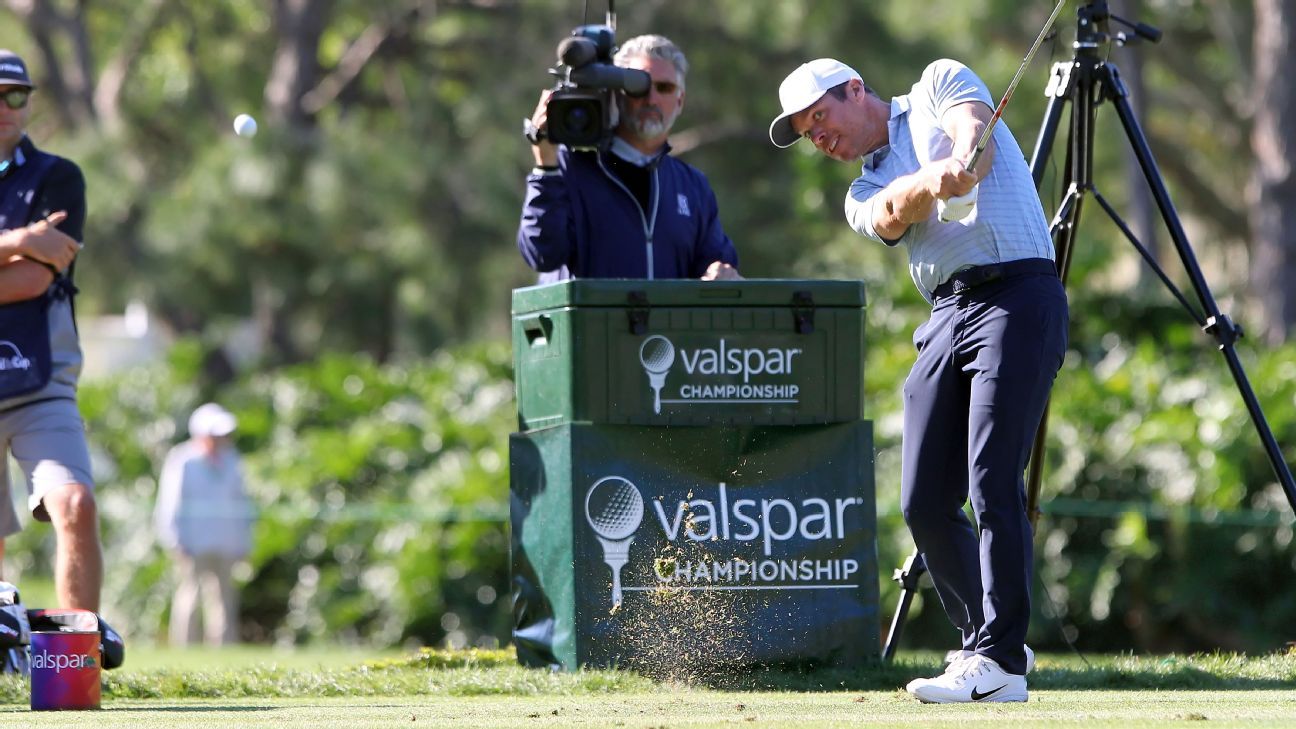 PALM HARBOR, Fla. — Paul Casey drove into Innisbrook and saw his picture on posters and programs — just what he needed to forget the cut he missed last week.

He played Friday as though he wants those photos to stay there.

Casey holed a 30-foot eagle putt on the 599-yard fifth hole and made short birdie putts on the other three par 5s on his way to a 5-under 66, giving him a share of the lead with Austin Cook in the Valspar Championship.

No one has ever won back-to-back at the Valspar Championship since it became a PGA Tour event in 2000.

“I’ve never defended a professional event. I would love to do that,” Casey said. “Mentally, last year I was hoping I would win, wanting to win. This year, knowing that I have won around here, I have a slightly different approach to it, and I played today quite aggressively and tried to take advantage of the golf course that I knew was going to get very, very tough this afternoon.”

Luke Donald holed a bunker shot for birdie on the par-5 fifth to briefly take the lead, only to miss a 4-foot par putt on the next hole and drop another shot on the par-3 eighth. He shot 70 and was one behind, along with Scott Stallings (68) and Sungjae Im (67).

Dustin Johnson overcame a rough patch early in his round with five birdies on the front nine to salvage a 69. Johnson, the No. 1 player in the world, was two shots behind on a Copperhead course he hasn’t seen in nine years.

Also at 4-under 138 was Curtis Luck, the former U.S. Amateur champion and last man in the field when Kevin Na withdrew 30 minutes before his tee time. Luck had never seen Innisbrook until his opening tee shot.

“It does show you what a good job they do with the yardage books,” Luck said.

The course is so demanding, and typically tougher in the afternoon, that the tournament is wide open. The cut was at 1-over 143, and the seven-shot difference from top to bottom is the smallest since the Wells Fargo Championship at Eagle Point in 2017.

Among those very much in the mix is Jon Rahm, three shots behind, who is making his Innisbrook debut.

Casey last year ended eight years without winning on the PGA Tour when he closed with a 65 and had to wait to see if Tiger Woods and Patrick Reed could catch him. It was the centerpiece of a resurgence for Casey, a 41-year-old from England who is back among the top 15 in the world.

He opened in the morning calm with a 10-foot birdie putt and did the rest of his damage on the par 5s. The eagle putt followed a blind shot over a hill on the longest hole at Innisbrook. He went bunker-to-bunker on his final hole at No. 9 and made bogey to slip into a tie with Cook.

“Everybody is going to make bogeys. If you can just minimize those, it puts you in a good position,” Casey said.

He spent the opening two rounds with Johnson, who had to maximize his birdies after his start. Johnson thought he might have had too much club on the par-3 13th and was stunned to learn that it had come up short enough to catch the slope and roll down toward the water, leading to double-bogey.

On the next hole, a par 5 where he had to lay up from the rough, Johnson had a 104-yard wedge for his third shot that traveled only about 50 yards. There was a reason for that.

“As soon as he hit it, he said, ‘Just don’t go in a divot,” said Austin Johnson, his brother and caddie.

It found a divot.

“It was big,” Johnson said, holding his hands about a foot part, which might have been a slight exaggeration. “I mean, it was long. It was deep. It wasn’t … I don’t think it was from a professional.”

He managed to get that up-and-down by making a 5-footer to avoid losing another shot. Johnson started the front nine with four birdies in five holes, including one birdie putt from 35 feet on No. 3, and is back in the game.

Gary Woodland also played with them and three-putted from 7 feet for double-bogey on his last hole for a 71 and missed the cut by two shots. Woodland had the longest active cut streak on the PGA Tour at 22, last going home on the weekend at the Players Championship last May.

On the other side of the course was 17-year-old Akshay Bhatia in his PGA Tour debut. Playing on a sponsor exemption, he was at 3 under for the day and even par for the tournament through eight holes until a muffed chip and a missed putt led to double-bogey at No. 9 that killed his momentum.

Bhatia bogeyed his last two holes for a 72 and finished at 4-over 146 to miss the cut. He plans to turn pro later this year after the Walker Cup if he makes the team. The cheers he heard in some corners of Innisbrook were inspiring, especially behind the 12th green, where the rowdy fans chanted his first name to make it sound like the “Ole” cheer at the Ryder Cup.

“It was sick. That was dope,” Bhatia said, adding that he hopes he can hear that at the Ryder Cup “in five, six years down the road.”