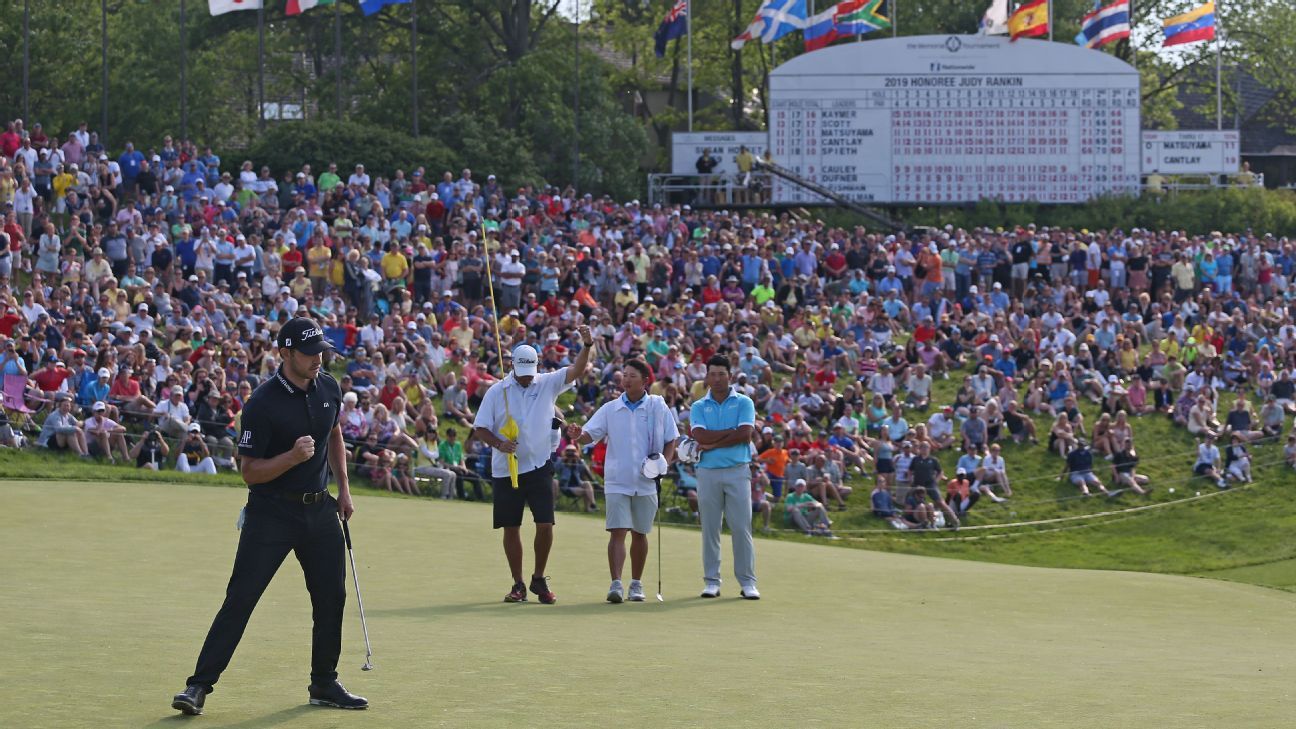 DUBLIN, Ohio — Patrick Cantlay got another handshake with Jack Nicklaus, this time as the Memorial winner.

Starting four shots behind, Cantlay closed with an 8-under 64 for a two-shot victory Sunday. It was the lowest final round by a winner in tournament history, and it moved the 27-year-old Californian into the top 10 in the world.

Martin Kaymer, trying to end five years without a victory, started with a two-shot lead and never recovered from back-to-back bogeys on the back nine. He shot 38 on the back nine and finished with a 72.

Adam Scott was the last player with a chance to catch Cantlay when he ran off three straight birdies to get within two shots, but he narrowly missed birdies on the last two holes and had to settle for a 68.

Cantlay first met the tournament host in 2011 when he won the Jack Nicklaus Award as the top player in college at UCLA. And he leaned on the advice of Nicklaus going into the final round to relax, enjoy the surroundings and finish it off.

“I finished it,” Cantlay told Nicklaus as he walked off the 18th green after making an 8-foot par putt that effectively sealed it.

Cantlay finished at 19-under 269 and won for the second time in a PGA Tour career that is younger than it seems. A rising star coming out of UCLA — he was low amateur at the 2011 U.S. Open and opened with a 60 at the Travelers Championship a week later — he missed two full years with a back injury that nearly cost him his career.

He is in his third full year since returning, and a victory over a strong field on a strong course is what long was expected of his skills.

And there some atonement at Muirfield Village for Cantlay. A year ago, he took a two-shot lead to the back nine and didn’t make a birdie the rest of the way, missing a playoff by two shots. This time, he putted for birdie on every hole on the back nine until the 18th.

“Being able to win on this golf course, in front of Jacking, making that putt on the last hole, I can’t tell you how good it feels,” he said.

Scott finished at 17-under 271. Only six other players have had a lower 72-hole score at the Memorial since it began in 1976.

One of them is Cantlay, who moves to No. 8 in the world with a U.S. Open at Pebble Beach looming. Cantlay is the only player to finish in the top 10 at both majors this year, leading late at the Masters until two bogeys over the last three holes.

Tiger Woods knew he had no chance to win the Memorial from 11 shots behind going into the final round, though he still put on a show and got what he needed out of his final event before the U.S. Open at Pebble Beach. He went out in 31 and was 7 under for his round through 12 holes until a sloppy bogey on the 14th and a closing bogey for a 67. He wound up in a tie for ninth at 9-under 279.

Kaymer is five years removed from his last victory at the 2014 U.S. Open and played like he was ready for that drought to end. He stuffed a wedge into a foot for birdie on the third hole, and stretched his lead to four shots by laying up on the par-5 fifth and spinning back a wedge to 6 feet.

Cantlay was the only player who looked capable of chasing him and played like he had to. On the fifth, he sent his drive well to the right into the rough. It was on a hill, with a flat enough lie that he had the gallery move beyond the cart path for a route to the green. His 4-iron ran onto the green, setting up a birdie.

No matter. For every birdie he made, Kaymer added another.

Cantlay rolled in a 15-foot birdie on the par-3 eighth and was walking off the green, while behind him a work was posting another birdie for Kaymer at the seventh.

But it all changed.

Cantlay closed out the front nine with a 12-foot birdie to get within two, while Kaymer in the group behind chopped his way to a bogey. And then the German blinked twice with bogeys from bunker on No. 12 and with an errant shot from the fairway on No. 13.

With two more birdies, Cantlay was on his way.