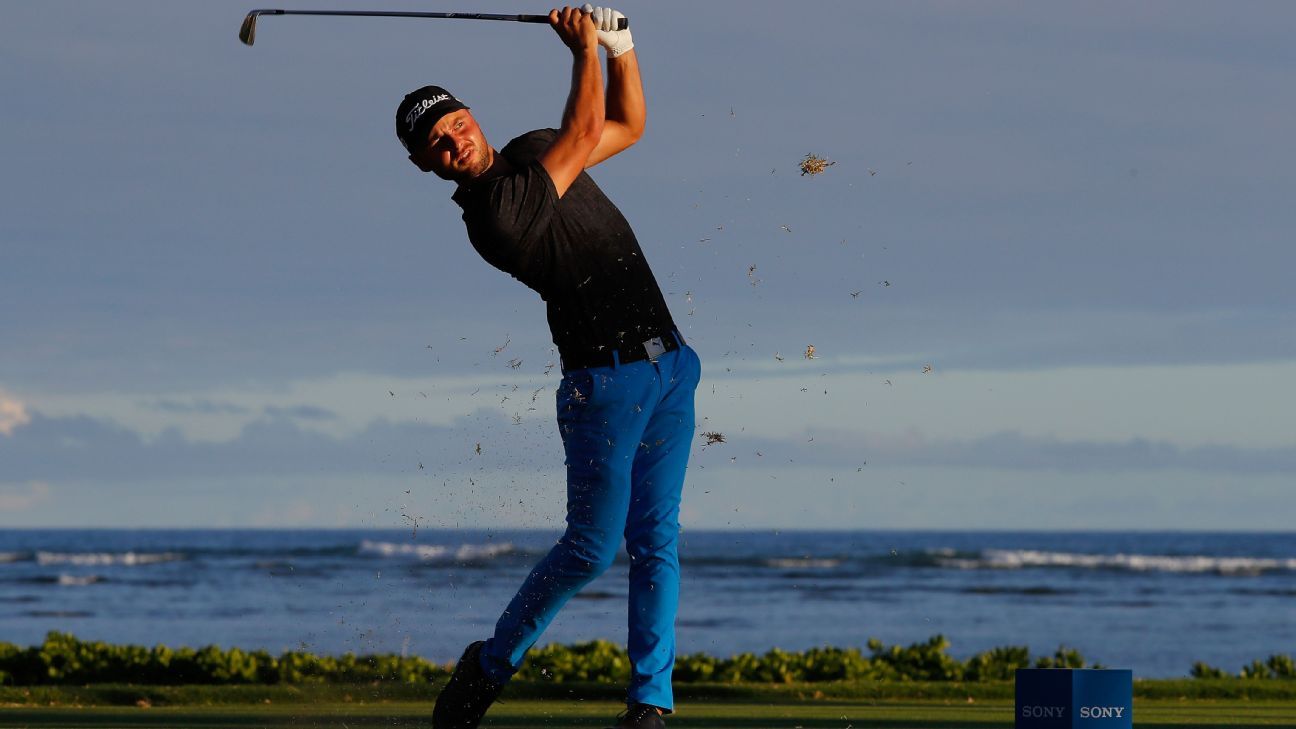 A year after his victory in the Bahamas that paved his way to the PGA Tour, Svensson capped off a rookie round to remember Thursday with a 10-foot birdie putt on his final hole for a 9-under 61 and a one-shot lead in the Sony Open.

“It was all a blur,” Svensson said. “I don’t even remember which holes I birdied.”

Throw in an eagle, too, a 6-iron on the par-5 ninth that he caught thin and was hopeful would clear the bunker. It did better than that, rolling out to 5 feet. But it was the back nine, as the wind began to calm along the shores just west of Waikiki Beach, where the 25-year-old Canadian made his move.

It started with a 50-foot birdie putt on the 11th hole. He hit it to 2 feet on the 12th, holed an 18-foot birdie on No. 13 and finished his run with a 10-foot birdie on the 14th. A tough up-and-down from right of the green on the par-5 18th gave Svensson the lowest round of professional career.

He did shoot a 61 while at Barry University, where he won the Jack Nicklaus Award in 2014 as the Division II player of the year.

His only significant victory as a pro was the second event last year on the Web.com Tour at the Bahamas Great Abaco Classic, and he held his position in the top 25 on the money list the rest of the year to reach the PGA Tour.

Andrew Putnam shot a 62 in the morning and looked tough to beat until Svensson came along.

It was the first time Putnam had played Waialae all week because of a bee sting, and it apparently didn’t bother him. He made birdie on half of his holes, none of them tap-ins, and took only 23 putts for the lowest score of his PGA Tour career.

Putnam had a four-shot lead among the early starters. By the end of the day, Matt Kuchar had a 63, and 75 players from the 144-man field were under par.

That did not include Jordan Spieth, who made his 2019 debut with a little rust, and it showed. He had to wait until his 16th hole, the par-3 seventh, for his first birdie of the year. And that was all he made in a round of 73 that left him needing a low round just to make it to the weekend.

He still managed to keep it entertaining, especially with the new rules.

Spieth, like most players, doesn’t understand the visually awkward change of dropping from knee height instead of shoulder height. Six holes into his round, his tee shot came up inches short of a sprinkler head. He called for a ruling and was given relief because of the potential of injury or damaging the club. Then, he did what he has done his entire golfing life — he held the ball at the level of his shoulder.

Slugger White, the tour’s vice president of competition, stopped him. Had he dropped and played the shot, it would have been a penalty. If not, he could have dropped again from the proper height.

He caught himself from dropping from shoulder height behind the 18th green. He also tapped in for par on the opening hole with the flagstick still in the cup, another change that is getting plenty of attention early in the year. And he tapped down a spike mark in the line of a 4-foot putt.

“All in all, I got a test of most of the new rules today,” he said.

Justin Thomas, who set the PGA Tour’s 72-hole record at the Sony Open two years ago, opened with a 67 by playing the last five holes in even par — a birdie, three straight bogeys and holing a bunker shot for eagle.

Putnam, among 23 players who were on Maui last week at the Sentry Tournament of Champions, made it all look so easy. This is his third year playing the Sony Open, so the course is not new to him. But it’s unusual for him not to at least get in a practice round.

He was poolside Tuesday when the bee stung him in the foot.

“I couldn’t walk, so I had to withdraw out of the pro-am,” he said. “I was just sitting around all yesterday and couldn’t even hit a shot. Yeah, kind of bizarre how it all worked out.”

He shot his 62 despite a bogey on the 15th hole when his pitch came up 12 feet short and he missed the putt.

Putnam didn’t miss many in the opening round. Statistically, he made just over 174 feet of putts, from a 5-footer on the closing hole (his shortest birdie putt) to his longest birdie on the 14th at just under 30 feet.

“The hole was very large and the ball was going in,” he said. “It was fun.”