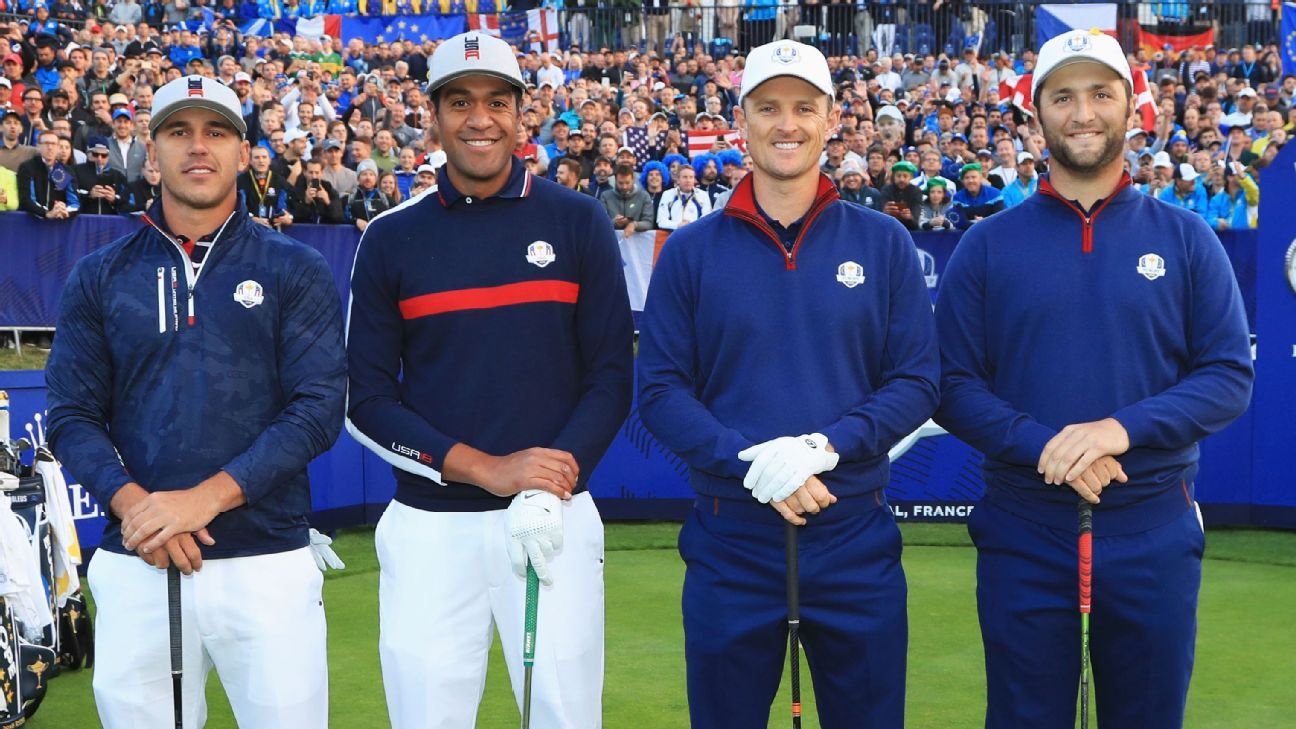 Justin Rose achieved the No. 1 ranking in the world while losing a tournament in a playoff; then by winning one in a playoff; and yet again by doing absolutely nothing — twice.

Such are the vagaries of the ranking system that the Englishman begins his 2019 schedule this week at the Desert Classic near Palm Springs, California, as the No. 1-ranked player in the world, having surpassed Brooks Koepka last week while sitting at home.

“It’s nice to be there; I love being at the top,” Rose said last month when he had ascended to the top spot for the third time in a matter of weeks — only to lose it and regain it again in the interim. “It’s a fantastic thing, and next time I get to the top, I’ll screen shot it again on my phone, no doubt. It’s not necessarily ‘been there, done that,’ but it’s a product of good play.

Who’s No. 1? It keeps changing

“I’m focusing on good play, but I wouldn’t say it’s a primary goal to stay there, necessarily. I want to play the golf that’s required to stay there and that’s my objective now.”

Ultimately, the bottom line to get to No. 1 — or stay at No. 1 — is to win several times or post a significant number of high finishes.

And over the past year, the competition has been stout, with the possibility for more changes in the coming weeks. Realistically, there are about five players who can get to No. 1, with a few others potentially having a chance if they put together a monster year.

When Rose went to No. 1 last week, it was the 10th change at the top since March. The nine changes in 2019 were a record for the Official World Golf Ranking since its debut in 1986 — the previous being eight changes in 2015. The No. 1 spot changed four times in November alone and seven times over the past three months.

Rose did it mostly with solid, consistent play near the top for the majority of the year. In addition to winning twice worldwide in 2018, he had 13 other top-10 finishes. For the year, he had 10 top-5s.

Koepka, of course, won the U.S. Open and the PGA Championship to strengthen his résumé, and he added a victory later in the year at the CJ Cup in South Korea. He had seven top-10 finishes, and his run to the top was all the more impressive given his four-month layoff early in the season due to a wrist injury.

Johnson, who is now ranked third, began 2018 at No. 1 but couldn’t stay there despite three victories and 10 other top-10 finishes. He has plenty of chances coming up, including this week’s European Tour event in Abu Dhabi as well as another in two weeks in Saudi Arabia before a run of events in which he has excelled, such as Riviera and the Mexico Championship.

Thomas had a brief run at No. 1 over the summer, and with two victories and nine other top-10s — and just one missed cut — he is ranked fourth. Since winning the WGC-Bridgestone in August, Thomas has played 10 times, with five top-10s and just one finish outside of the top 20. But he’ll need to add a victory or two in the coming months to get back into the No. 1 chase. Rose, Koepka, Johnson and Thomas all figure to be in the mix for No. 1 this year, given their close proximity to the top and their strong records over the past two years.

DeChambeau also could figure in the discussion if he continues his strong play. The former NCAA and U.S. Amateur champion, who took two FedEx Cup playoff events in the fall, won a total of four times in 2018 and made a big move from 99th at the beginning of the year to fifth. He has started this year with consecutive top-10 finishes in Hawaii.

As for those currently ranked outside of the top 5?

Basically, you need to win several times to get in the discussion.

Xander Schauffele, Jon Rahm, Rory McIlroy, Francesco Molinari and Tony Finau hold down the sixth through 10th positions. All are certainly capable but will need to get on a run.

Schauffele, who won the Sentry Tournament of Champions after capturing the WGC-HSBC Champions in November, was 25th at the end of 2017; he has two victories and seven other top-10s since. That got him to sixth, but he’ll likely have to do even better to ascend to the top spot.

Rahm is another interesting study. The European star from Spain flirted with the No. 1 ranking a year ago at the Farmers Insurance Open after winning the Desert Classic for his second victory in three starts. But he had just one more victory, at the Spanish Open, until his win at the Hero World Challenge last month. Seven other top-10s has him at seventh in the world.

Then there is McIlroy, who is eighth. Amazingly, the four-time major champion has not been No. 1 in the world since relinquishing the top spot while injured in 2015 and missing The Open. He was as high as No. 2 following the Players Championship in 2017, and now he is eighth.

Another former No. 1, Jason Day, put it in perspective.

“It’s not hard to get back there; you just have to win,” said Day, who is now 11th. “Everyone is so good. Everyone has a team around them that is pushing them to the absolute limit. The level of competition has gone up. But if you can win consistently each and every year, you’re definitely going to be around that mark.”

And yet Day offers an example of the difficulty of the climb. He began 2018 at No. 13 in the world, won twice and had four other top-10s — and still dropped a spot to 14th.

Not enough wins and not enough high finishes and Day found himself nearly in the identical spot.

A 13th-place finish at the Tournament of Champions has since moved Day to 11th.

And then there is Woods. The player who has been atop the rankings for more weeks than any other made the biggest move of any player outside of the top 100 last year, bolting from 656th at the start of the year to 13th following his victory at the Tour Championship. Woods had two other runner-up finishes, including at the PGA Championship, and a total of seven top-10s. He moved up to 12th this week, and he is expected to return at next week’s Farmers Insurance Open.

But this is the ultimate perspective: Woods began the 2013 season ranked third in the world after winning three times in 2012. It wasn’t until he won three more times — in his first six starts — of 2013 that he got back to No. 1.

Rose said it was a “boyhood dream” to get to No. 1 after losing to Keegan Bradley in a playoff at the BMW Championship. He got there again after winning the Turkish Airlines Open, and then again, twice, after Koepka did not finish high enough at the Dunlop Phoenix event in Japan and at the Sentry Tournament of Champions.

“It’s something I can say now in my career, ‘I’ve been the best player in the world, I’ve been to the top of the game,”’ said Rose, who knows just how hard it will be to stay there.