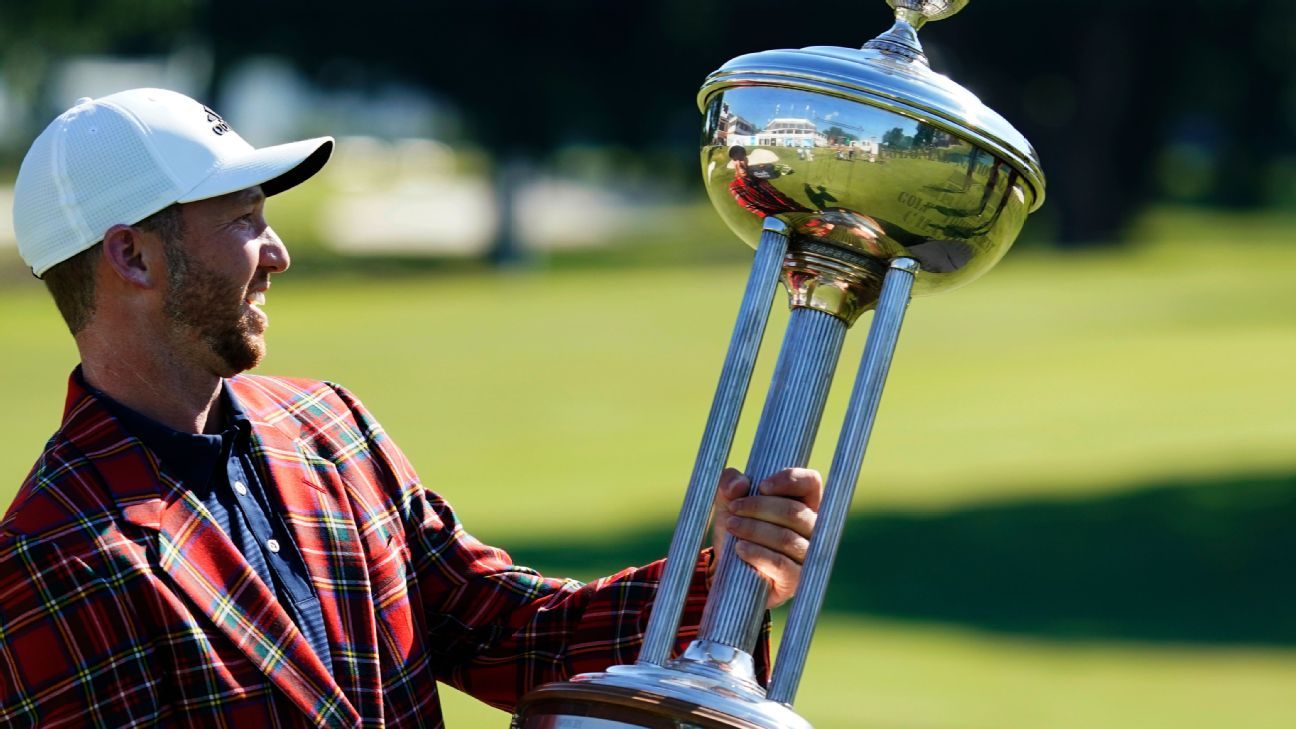 FORT WORTH, Texas — Daniel Berger was playing some of the best golf that no one noticed. Three months away because of the COVID-19 pandemic didn’t slow his momentum, and he made it pay off Sunday with a victory at Colonial.

The PGA Tour made a healthy return to golf at the Charles Schwab Challenge with a somewhat sickly finish. Berger saved par from behind the 17th green on the first playoff hole and won when Collin Morikawa missed a 3-foot par putt.

Berger closed with a 4-under 66, his 28th consecutive round at par or better dating back to Oct. 11 at the Houston Open.

Even over the final hour, a half-dozen players were still in the mix. All that was missing was the sound and energy of a gallery, with the PGA Tour not allowing spectators for the opening five events in its return.

Berger won for the third time — all victories during this week on the calendar, just not in circumstances like this. It was the first PGA Tour event since March 12 when the spread of the new coronavirus shut down golf and other sports.

From no positive tests to a dynamic finish at history-rich Colonial, PGA Tour Commissioner Jay Monahan sized up the week by saying, “This has been a phenomenal start to our return.”

Morikawa has been equally steady. Since graduating from Cal a year ago, he has won and made every cut, a streak now at 21 events, the longest streak by a newcomer since Tiger Woods.

He took a share of the lead with a 50-foot putt on the 14th hole. It was the short ones that hurt. Morikawa also missed a birdie putt from 6 feet on the 18th hole in a 67.

Berger was the only one who delivered, making a 10-foot birdie on the final hole that put him at 15-under 265. The last time Berger was in a playoff, Jordan Spieth holed a bunker shot to beat him at the Travelers Championship. So he could feel for what Morikawa felt int he loss.

“It’s going to hurt for a little while, but he’ll get over it and he’ll be winning again,” Berger said.

Even the optimism of being back to golf didn’t eliminate the sting, and more than Morikawa felt it.

He hit into the water on the 15th from a fairway bunker, hit a poor chip after the penalty shot and then made a 30-footer to escape with a bogey. He followed with a 25-foot birdie to regain a share of the lead. And then his 3-foot par putt on the 17th hole dipped in one side of the hole and spun out of the other.

His 25-foot birdie putt to join the playoff came up just short and he shot 69.

Bryson DeChambeau cringed when his 12-foot birdie putt on the 18th narrowly missed, giving him a 66 and leaving him one shot out of the playoff. Ditto for Justin Rose, whose 18-foot birdie on the last hole was a turn short. He also had 66. Jason Kokrak finished well ahead of everyone else. He also missed a birdie on the last hole in his round of 64.

Spieth, trying to end three years without a victory, left with a consolation prize of progress. He missed a 2-foot par putt on the sixth hole — part of three bogeys in a four-hole stretch — but was still in the mix until a tee shot out of bounds on the 14th. Even then, he made a 35-foot putt to save bogey. He wound up with a 71 and tied for 10th.

Rory McIlroy had seven straight tournaments no worse than fifth, a streak that came to a stunning halt. Starting the final round three shots behind, he was 5 over through seven holes and closed with a 74 to tie for 32nd.

The final round was as wild as expected with eight players taking turns or sharing time in the lead, all without having any idea without fans to give a hint of what was going on.

“If there are fans and everything with the ‘oohs’ and ‘aahs,’ I’d probably be a little more (ticked) off,” Schauffele said. “Maybe that’s a good thing for me right now. But it was definitely weird. It was sort of an internal battle, which it always is for me, but more so internal this week just with no fans.”

Monahan conceded his biggest concern going into the week, even with its testing and safety procedure, was positive tests popping up. “That’s something, candidly, that I lost a lot of sleep over in the weeks that preceded coming in,” he said.

All 487 tests at Colonial were negative, and the golf lived up to its part with a star-filled leaderboard and a half-dozen players still in the mix the final hour.

Next up is the RBC Heritage at Hilton Head on the South Carolina coast, and Monahan said the first week won’t be complete until then to see how players handled the interstate travel. Those on the charter were tested for the new coronavirus after the third round. Everyone else would be tested when they arrived at Hilton Head.

“This is about a sustained return,” Monahan said. “But I think as we sit here late in the day Sunday, there’s no question that this has been an exceptional week.”