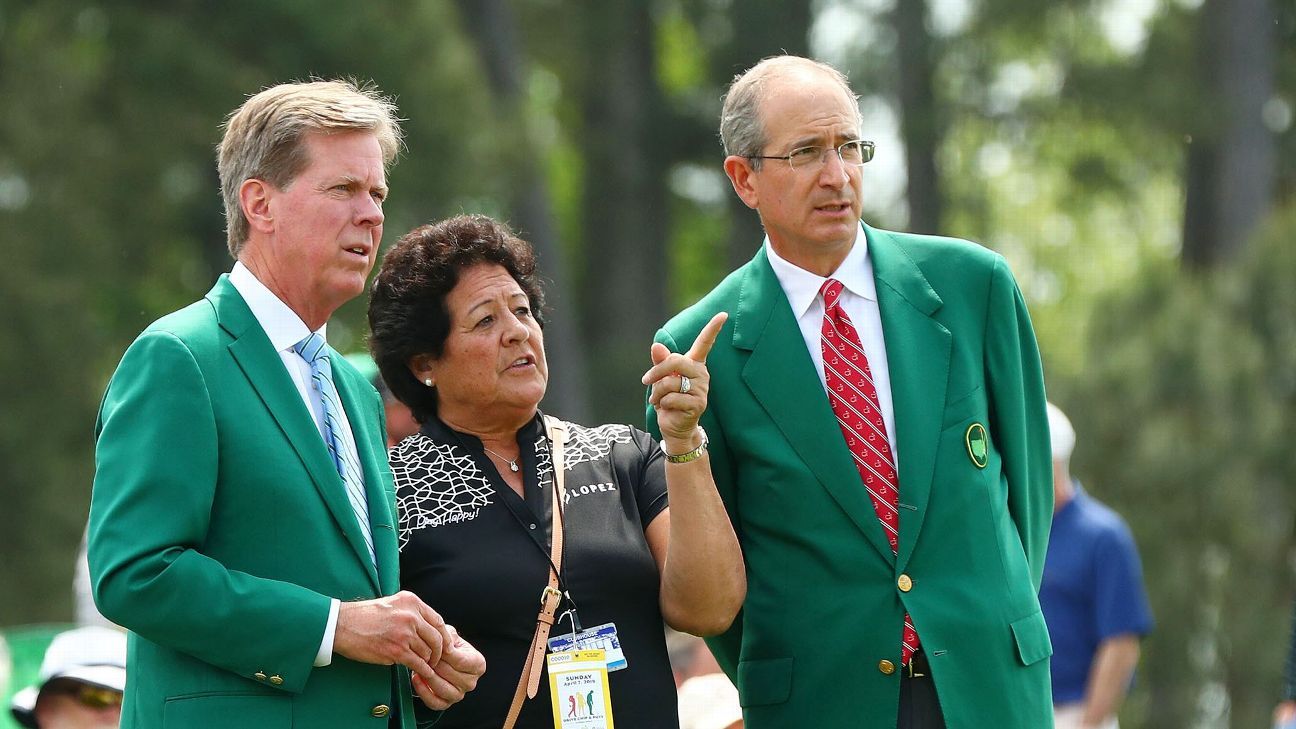 AUGUSTA, Ga. — Wednesday was not a remarkable day at Augusta National because women’s golf was the main subject of conversation during the Masters.

Club chairman Fred Ridley and his fellow green jackets took a bow over the success of last week’s inaugural women’s amateur event, a tournament that his predecessor, Billy Payne, promised only four years ago would never, ever happen. It really was a beautiful thing. So beautiful, in fact, that LPGA legend Nancy Lopez told ESPN.com that she had chills when the announcement of the event was first made and that she could not believe women “were actually going to take a divot at Augusta National” in competition.

Ridley spoke of being surprised by the “emotional response” to the sight of women playing on God’s greenest earth and out of God’s whitest sand. He spoke of how the annual women’s amateur will have a major impact on the growth of the game, and of how Saturday’s final round felt like a Masters Sunday. He spoke of the many members who approached him to say they had never been prouder to belong to the club.

“I think it made us a better organization,” the chairman said.

And a hearty amen at Amen Corner to that.

But when asked why Augusta National wouldn’t consider hosting a professional tournament featuring the very best players in the world, like it does on the men’s side, Ridley landed his response in Rae’s Creek. The chairman repeated that the club’s history is tethered to amateur golf, as it was co-founded by the greatest amateur of all, Bobby Jones, and that promoting young players makes them more marketable on arrival on the LPGA Tour.

Of course, Ridley didn’t adequately explain how the club’s romantic ties to the amateur ideal jibes with the fact that it hosts the sport’s most prestigious professional tournament for men. He described the Masters as “the epicenter” of the club and one that needed to be protected. In other words, club elders weren’t about to tear up the course before the men teed it up, or potentially subtract from the singular magnitude of the Masters by hosting another professional event.

“These problems are solvable with slight tweaks to the schedule,” said Dr. Martha Burk, who famously went to war with Augusta National in a different life. “Growing women’s golf is a pretty nebulous term. My concern is, was this a PR stunt or is it really the start of something of substance?”

As head of the National Council of Women’s Organizations, Burk once raged against the club’s male-only membership and staged a protest near its gates in 2003. Hootie Johnson, Augusta National’s hopelessly old-school chair, responded by explaining that he wasn’t invited when his four daughters celebrated his wife’s birthday at their lake house.

In a phone interview with ESPN.com 16 years later, Burk conceded that Augusta National had taken some long-overdue steps in the direction of common decency and fairness. Payne erased Johnson’s mistake by welcoming the club’s first two female members in 2012 (the club now has six female members) and by calling it “a joyous occasion.” Ridley then erased Payne’s mistake by establishing a women’s tournament defined by great optics and great golf.

“But if we had not done what we did,” Burk said Wednesday, “they would be exactly where they were in 2003. I have no doubt about that.

“I did the math, and at the current rate it’s going to be about 200 years before we reach parity with the number of female and male members. Women are still very much a token there. Playing one round of an amateur event there, in my view, could be tokenism on a little higher level.”

On cue, Ridley didn’t see it that way at all. He maintained that the amateur tournament served to “shine a bright light on the amazing accomplishments of women everywhere,” and asked the guardians and fans of golf “to introduce women of all ages to this game, a relative, a friend, a colleague at work.”

On one level, for those present for the bygone performances of Hootie and the Blowhards, it was stunning to hear an Augusta National leader talk about women in an inclusive way. On another level, it was embarrassing to think that in 2019 anyone would have to say these things and issue these challenges, never mind anyone from a club that long made exclusion a matter of policy.

Asked by USA Today columnist Christine Brennan to concede it was a mistake to keep women out of the club for so long, Ridley missed a golden opportunity in his news conference to man up and express contrition for what was a mortal sin. The chairman said only, “We learn from the past,” and emphasized his desire to focus on the future.

“It’s OK to encourage the public,” Burk said, “but what you need to do is show true leadership as the 900-pound gorilla. Just encouraging other people to get their neighbors to play golf when the infrastructure of women’s golf — philosophically and physically — is not up to the standards of men’s golf is a little disingenuous.

“I certainly hope Augusta National goes further than words. More questions need to be asked, because this sort of turned into an admiration-fest, where they did something minor to make themselves look good. To me this is a baby step, but at least it is a step.”

Twenty years ago, Brennan, the columnist, asked Hootie Johnson why there weren’t more African-Americans in his club and why there weren’t any women at all. The chairman shut down the inquiry as an alleged private club matter not designed to be discussed publicly, and Brennan didn’t exactly feel the support in the press room, among her credentialed peers, that she felt Wednesday.

Progress is a glacial concept in this throwback arena. Now the obvious question needs to be asked: Will Augusta National ever invite the world’s best female players onto the sport’s relevant stage?

“I think they felt they needed to start with the amateurs,” said Lopez, the Hall of Famer who grew up watching Masters telecasts with her father. “I don’t know if the pros will ever play here. The gentlemen have their tournament, and to have another event, I don’t know if that would be possible.”

Asked if she would like to see the LPGA make an annual stop at Augusta National, Lopez said, “Oh, I would love to see that.”

Who wouldn’t? Ridley deserves credit for ignoring Payne’s 2015 claim that the club’s relatively short member season and extensive Masters prep would prevent it from ever hosting another event. But Ridley’s explanation for sticking with female amateurs rather than the pros was the worst swing of the week.

This shouldn’t be too difficult. Clear out a week in late May or early June — after the club closes — that doesn’t conflict with the U.S. Women’s Open, and let the LPGA’s stars have at it.

“We’re bound to a tradition of constant improvement,” Ridley said.

Augusta National should keep that tradition going, and embrace the obvious. The best way to grow the women’s game is to promote the best women’s players. Immediately.