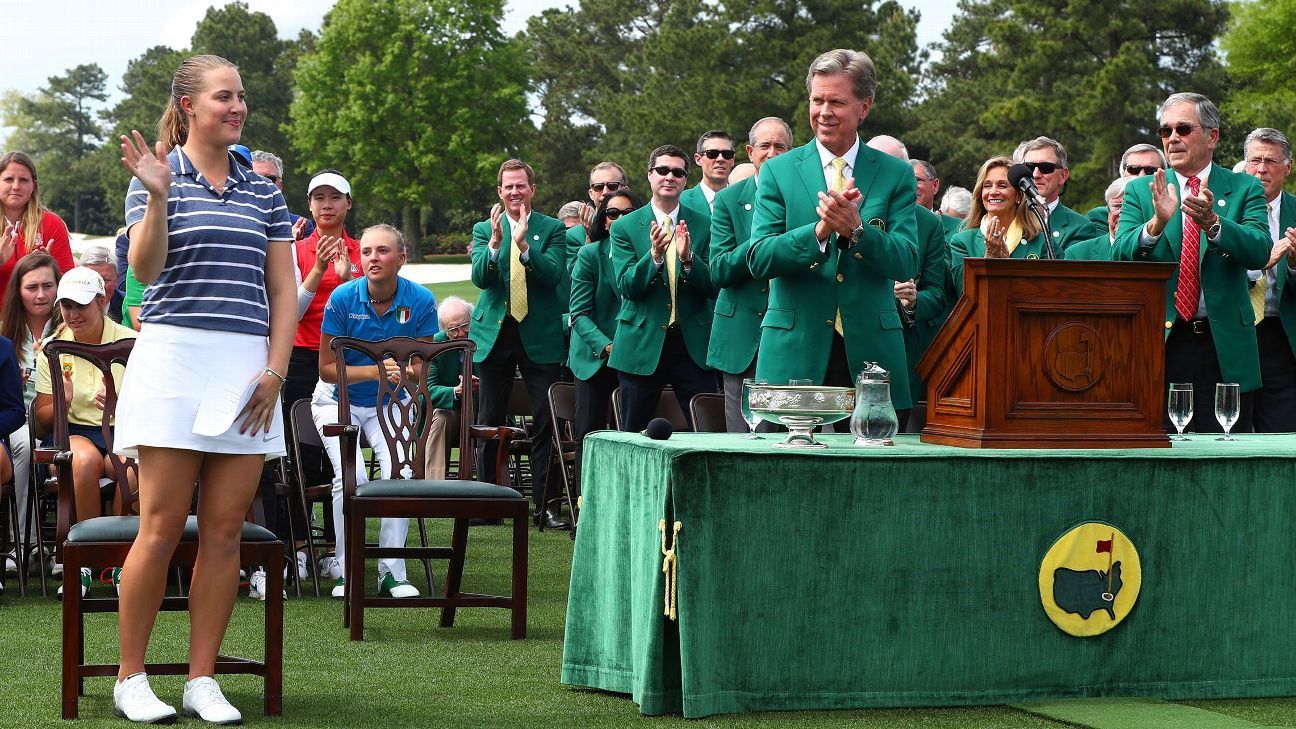 AUGUSTA, Ga. — During Augusta National’s controversial stance involving membership, the truth often missed was the club welcomed women — although not as members — to play the storied course going back to the days of founder Bobby Jones.

The great amateur golfer was friends with some of the leading women players of his day, notably Joyce Wethered, Alex Stirling and Marion Hollins, who won the 1921 U.S. Women’s Amateur.

All would have watched in wonder on Saturday as women competed at Augusta National for the first time, with Wake Forest senior Jennifer Kupcho, 21, playing the round of her dreams, shooting 5-under-par 67 including a birdie at 18 to win the inaugural competition.

The Masters dates to 1934 and the club itself to 1932, when Jones — with architect Alister MacKenzie but with considerable input from his women friends — put his dream in motion and opened his “winter” course near the South Carolina border that would become among the most famous in the world.

As you would expect, the experience for the 72 players invited to play in the Augusta National Women’s Amateur was off the charts, first-class in every way. And getting to play a course — let alone compete — that so many dream about playing will likely be the biggest takeaway.

“Augusta National exceeds any expectations you have,” said Kaitlyn Papp, who tied for fifth. “It’s truly a magical place to play golf.”

Said Zoe Campos, 16, the youngest player in the field who is headed to UCLA next fall: “It’s probably the best spring break I’ve ever had.”

And it offered up a pretty special final round as well, with Kupcho prevailing by four shots after overtaking Mari Fassi with by playing the final six holes in 5 under par. Kupcho was one of just two players to shoot in the 60s.

The scene was well removed from a time not long ago when the Masters was staged without its most prominent sponsors in order to spare them the indignity of boycotts due to protests over the club’s policy of not admitting women members.

In 2003 and 2004, the club went commercial-free during its domestic broadcasts because it feared backlash in the aftermath of protests by activist Martha Burk, who wondered why a place that welcomed the world to view its iconic course and let in spectators by the thousands to witness the Masters in person could not see clear to admit a woman to its membership ranks.

That didn’t happen until 2012, when then-chairman Billy Payne announced that the club had invited its first two women members, a total that has since grown to six.

And that’s not to say the Women’s Amateur didn’t come without its own tinge of controversy.

Why not just have all three rounds of the 54-hole event at Augusta National, instead of just one? Why schedule it against the first women’s major championship of the year, the ANA Inspiration? Why not a professional event that pays prize money?

All valid questions as Augusta National basks in glory for staging such an event.

“What I’m hoping for, is that by showing these women in an iconic setting to show their skills and the elite athletes that they are, it is going to be very inspiring to them as they leave to go back to their schools and homes and their countries,” said Fred Ridley, Augusta National chairman. “But also, it is going to be somewhat infectious and inspiring to other people.”

The golf certainly did not disappoint, as Kupcho and Fassi played in the final group, two of the top women amateurs in the world — and both of whom have already earned LPGA Tour status but delayed turning pro — throwing eagles and birdies at each other over the back nine while displaying a high level of sportsmanship and friendship throughout.

Fassi led by two strokes with six holes to play, made one birdie and two bogeys — and lost by four. That’s more of a tribute to Kupcho, who played those same holes in 5 under and could sell that finish for quite a sum to the competitors who compete in the Masters next week.

“I think to win at Augusta National, just to get to walk the fairways and walk up 18 with as many fans as there were, it’s an experience like none other,” Kupcho said.

All of this opened up the venue to a new world of spectators, many of whom never have had the opportunity to see Augusta National in person.

“I was ecstatic,” said Alex Gough, 31, of Melbourne, Australia who now lives in Brooklyn, N.Y. and was able to purchase tickets via a lottery. “There are so many things that you can’t appreciate unless you are here.”

His friend, Chase Williams, 31, also of Melbourne by way of Denver marveled at the opportunity.

“There’s so many things you recognize from seeing it on TV, and then there’s like 50 percent that is completely different, that you’ve never seen before,” Williams said.

Augusta National conducted a lottery for the event last fall and capped the $75 tickets at a number that was believed to be about two-thirds of what would attend the Masters on a tournament day. Tee boxes and greens were surrounded by spectators, who got to see Augusta National with a different perspective than what it will be like when the Masters begins on Thursday.

And, of course, the merchandise pavilions were jammed with Disney-like lines, shirts and hats flying over the shelves, as per normal.

“It has been a dream come true,” said Fassi, who plays at the University of Arkansas. “It is amazing what we’ve been able to have out here today. The crowds were unreal. It was so much fun to play in front of them. Of course the ending wasn’t what I would have liked, but it was still amazing. Everyone was so supportive. It was amazing to be able to compete here at Augusta for the first time.”

That was pretty much the sentiment all the way around. You can’t get beat an opportunity to play Augusta National or see it in person.