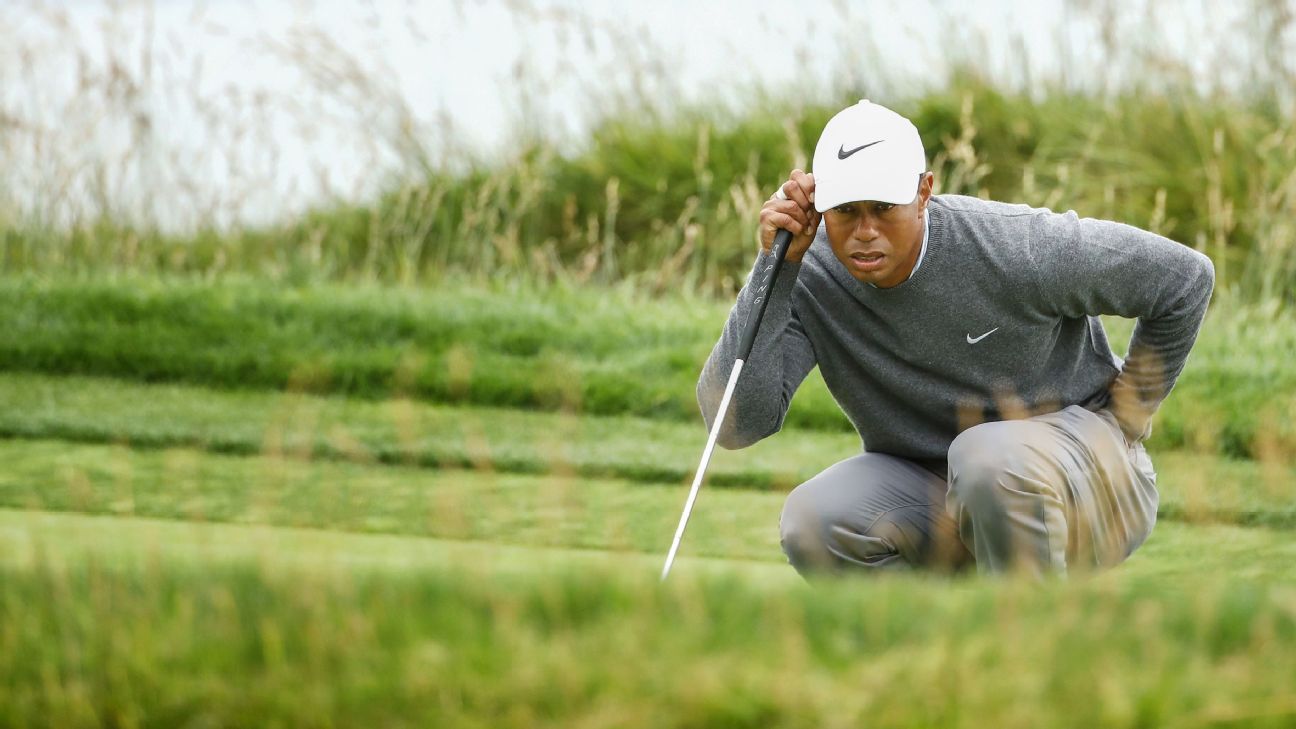 PEBBLE BEACH, Calif. — For as many good iron shots as he hit to give himself chances Saturday during the third round of the U.S. Open, Tiger Woods hit just as many puzzling ones on his way to an even-par round of 71 that left him well back of the leaders.

Known for his iron prowess throughout his career, and especially at the best times of his comeback in the past two years from back surgery, Woods has been uncharacteristically off at Pebble Beach. He hit just nine greens in regulation Thursday and only 11 Saturday, several times coming up short, which makes you wonder about any physical problems.

Woods was predictably coy when asked about any physical issues as he wore KT tape — a therapeutic strip often worn to treat pain — on his neck, just as he had during The Open at Carnoustie last year.

“When it’s cold like this, everything is achy,” Woods said. “It’s just part of the deal.”

Woods was tied for 27th and 10 shots back of leader Gary Woodland as the third round continued.

Asked specifically about the neck strain that kept him from competing in March at the Arnold Palmer Invitational and if there was any correlation, Woods said: “It’s all the same. It’s been like that for years. The forces have to go somewhere. And if they’re not in the lower back, they’re in the neck, and if they’re not, they’re in the mid-back, and if not they go to the knee. You name it.”

Woods gave a similar answer at the Players Championship in March when he returned from the neck issue, and it’s simply another example of Woods’ fate, having had four back surgeries. Some days, as he has said often, are not going to be as good as others.

He only talked about it because he was asked and did not suggest it directly impacted any of his shots Saturday.

“As I say, my back impacts every shot I play. It’s just part of the deal,” he said. Pressed on any specific shots, Woods said: “Let me put it this way, I feel every shot I hit. I think that’s always going to be the case from here going forward.”

Woods got off to a poor start, bogeying two of his first three holes before birdies at the fourth and fifth. But he couldn’t par the par-5 sixth, and then was up and down throughout the rest of the round, hitting some good approaches but hitting some poor ones as well.

He managed to get back to even par for the round and the tournament by holing a long birdie putt at the 16th and then knocking it on the 18th green in two and two-putting for birdie.

“I got off to an awful start and clawed it around, but still gave myself a chance, which is positive,” Woods said. “And we’ll see what the weather forecast is for tomorrow. There are a lot of guys ahead of me right now. Seems like everyone is doing what I was supposed to do earlier, which is play 2- to 4-under par through the first seven [holes].We’ll see what they do coming in.

“I was playing with Ben [An] today, and he played a hell of a round. Missed the ball in the correct spots, and that’s what you have to do at this place.”

“I always dreamed about playing golf with him and especially it’s the U.S. Open at Pebble Beach, that’s definitely something special,” said An, who kept refreshing his phone on Friday night to see the pairings for Saturday, thinking he might get paired with Woods.

“It felt like two and a half hours,” he joked. “I wanted to play with him, see what it’s like. And I got my wish. I’m happy that I played a great round in front of the goat. … He didn’t have the best day, but he’s still Tiger. Doesn’t matter how he plays, just playing with him that means a lot to me.”