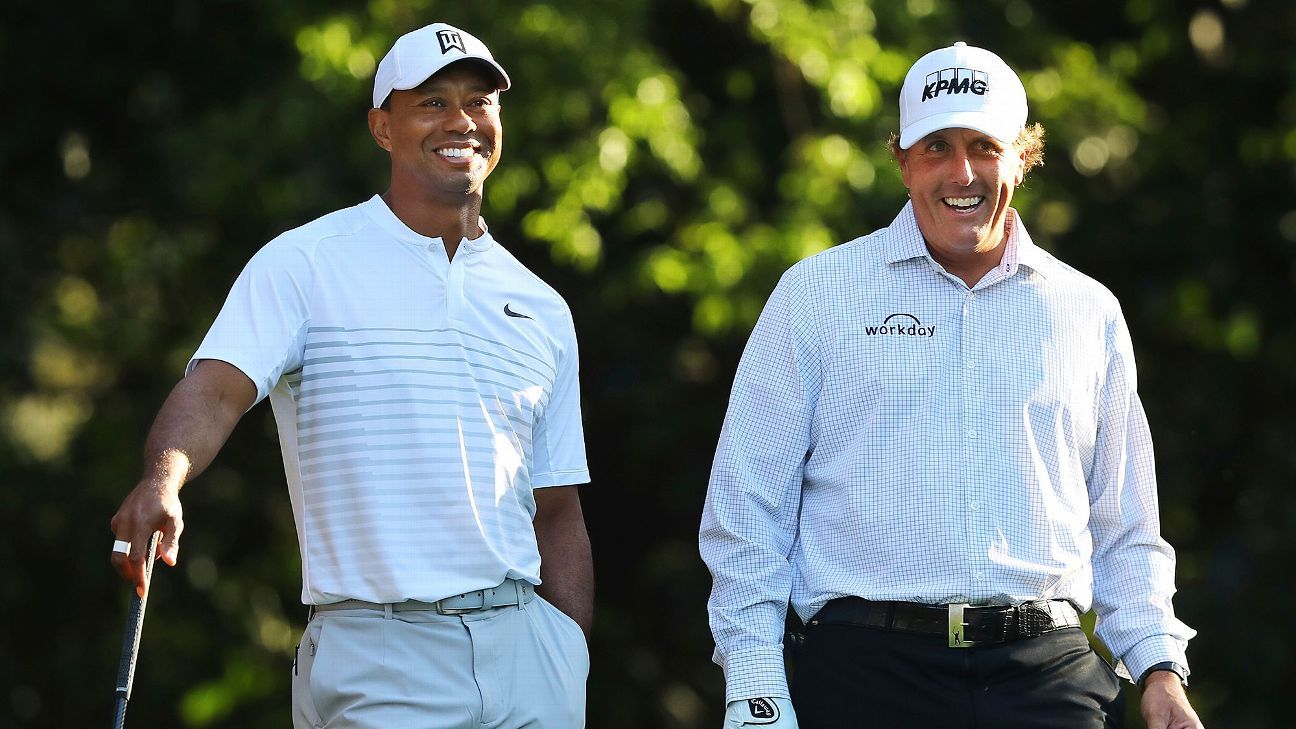 We don’t yet know that much about it — like where it will be played and when. But we do know that “The Match: Champions for Charity” is planned for next month, likely in Florida, with Tiger Woods, Phil Mickelson, Peyton Manning and Tom Brady as participants. Proceeds from the event will benefit various charitable endeavors helping those impacted by the coronavirus pandemic. The specifics will be disclosed later.

Other than Turner Sports announcing the endeavor on Wednesday, and Woods and Mickelson chiming in on social media, there are not a lot of details yet. The PGA Tour has yet to sign off — although there is no indication that it won’t — and a contract is not yet signed.

The parties came to a basic agreement Wednesday, and because there had been so much speculation about this event, Turner Sports elected to release the bare-bones details.

With that in mind, here are some questions to ponder as we await what will undoubtedly be a well-received, televised live sporting event.

How did this come about?

When Woods and Mickelson signed on to play the original “Match” at Shadow Creek in Las Vegas two years ago, it was always with the intention of doing more than one, with the possibility of bringing on partners and other formats.

The Woods-Mickelson-Manning-Brady concept had been in the works for several months, but was put on hold when golf stopped due to the coronavirus pandemic. Then it was revived as a charitable endeavor.

Where will it be played?

Turner did not announce a venue or a date. An ESPN source said the event is likely to be played in Florida around Memorial Day. One venue already floated is The Medalist in Hobe Sound, where Woods is a member. A private club such as Medalist might make some of the logistics easier.

If not there, where? The Innisbrook Resort in Palm Harbor, Florida, lost out on the Valspar Championship, which was canceled because of the coronavirus pandemic shutdown. So perhaps the PGA Tour would want to give the place some love. The Bay Hill Club & Lodge, home to the Arnold Palmer Invitational, would be easy from a logistical standpoint. The TPC Sawgrass, the home of the Players Championship, is out because it is doing extensive work in the area surrounding the 17th hole, which is closed.

How about Seminole Golf Club? The Juno Beach, Florida, course designed by Donald Ross is an exclusive, well-known venue that Brady recently joined. It would also make for some excellent television.

What are the teams?

Mickelson said on Twitter that he and Brady are taking on Woods and Manning.

After feeling the sting of defeat the first time around, Looks like @TigerWoods is bringing a ringer to The Match (#PeytonManning).

Woods and Manning have played in pro-ams several times, most notably at the Memorial Tournament and at the Wells Fargo Championship. Brady, like Manning, has played in the AT&T Pebble Beach National Pro-Am.

What kind of golfers are Manning and Brady?

Pretty good. Both have single-digit handicaps, most recently listed as an 8 for each. That means they typically shoot around 80. It doesn’t hurt that Manning is a member at Augusta National as well as Cherry Hills in Denver. Brady recently joined Seminole and is also a member of The Country Club in Brookline, Massachusetts, home to the 1999 Ryder Cup and three U.S. Opens. The U.S. Open is scheduled to return there in 2022.

What about the format?

Still to be determined. A best-ball scenario seems easy enough, but why not change it up every six holes? Best-ball, alternate shot and two-man scramble?

Who is running the event?

Excel Sports Management and Lagardere Universal — the representation companies of Woods and Mickelson, respectively — are putting the competition together, as they did for The Match in 2018. Turner Sports is their television partner.

Will this be on live TV?

Yes, unlike the original Match, this will not be a streaming-only production. Turner announced the event would be televised live by TNT.

Why does the PGA Tour have a say in this?

As members of the PGA Tour, Woods and Mickelson must, in essence, get permission to play in non-sanctioned tour events. This is ostensibly to protect the PGA Tour from its own members upstaging their tournaments. Even now, with no other golf being played, the PGA Tour controls its members’ television rights. In theory, the tour would be paid a portion of a television rights fee garnered by Excel and Lagardere.

Will Tiger and Phil be paid?

Unlike the 2018 event, in which Mickelson received $9 million from the “winner-take-all purse” (Woods undoubtedly received some sort of appearance fee), it seems there will be no monetary payoff for the two golf stars. All the proceeds are expected to go to charity related to COVID-19 relief.

As Mickelson’s agent, Steve Loy, said: “Wish I could say more, other than four Hall of Famers competing and creating tremendous value and awareness to help others in need for this all-in charity event.”

What kind of health precautions will be in place?

Since the PGA Tour is involved, there is likely going to be a requirement that all involved be subject to a coronavirus test. You can also expect there to be numerous social distancing plans in place for players, caddies, officials and TV personnel.

Giving all the players their own cart helps solve the social distancing issue, but it makes it hard for there to be any good-natured interaction between them. So it is likely they will walk, while wearing microphones, and keeping a healthy distance — but close enough for plenty of banter. As for caddies … that could be problematic in this climate (and an issue that will have to be resolved if the PGA Tour is to really return in June). At most golf courses that are open in Florida, flagsticks cannot be removed. There are no rakes in bunkers. The cups are raised, too, so a ball does not drop into the hole. Clearly the latter can’t happen for a true competition, but it’s unclear how they might work around that.

Will any of them be wearing masks?

The rules about face coverings vary by city and county in Florida, with most requiring anyone who is in a public place to wear a mask. It is possible for the purposes of The Match that the golf course will not be considered “public,” and it’s hard to envision the players wearing masks. But it’s quite possible everyone else is required to do so.

Will spectators be allowed?

No, and it appears that not even corporate partners will be invited to be on site. The idea is to have as small a footprint as possible, with the ability to keep a safe distance for all involved, from the players to the television production personnel needed to broadcast the event.

How will money be raised for charity?

To broadcast the event, Turner will be paying Excel and Lagardere a rights fee, some of which goes to the PGA Tour. Turner sells advertising time during the broadcast. It is unclear how these entities will approach any charitable aspect among themselves.

Although nothing has been decided, it would make sense for there to be some sort of telethon-type aspect to the broadcast, where a phone number and website would be prominently displayed so that those watching can make donations. A running tally along with a stated goal would be an added bonus.

When will we know more?

Turner representatives said their announcement Wednesday provided only the basics because many facets of the event still need to be worked out. That said, even if the event is at the end of May, there is not much time to prepare. So expect more details to emerge in the next two weeks.