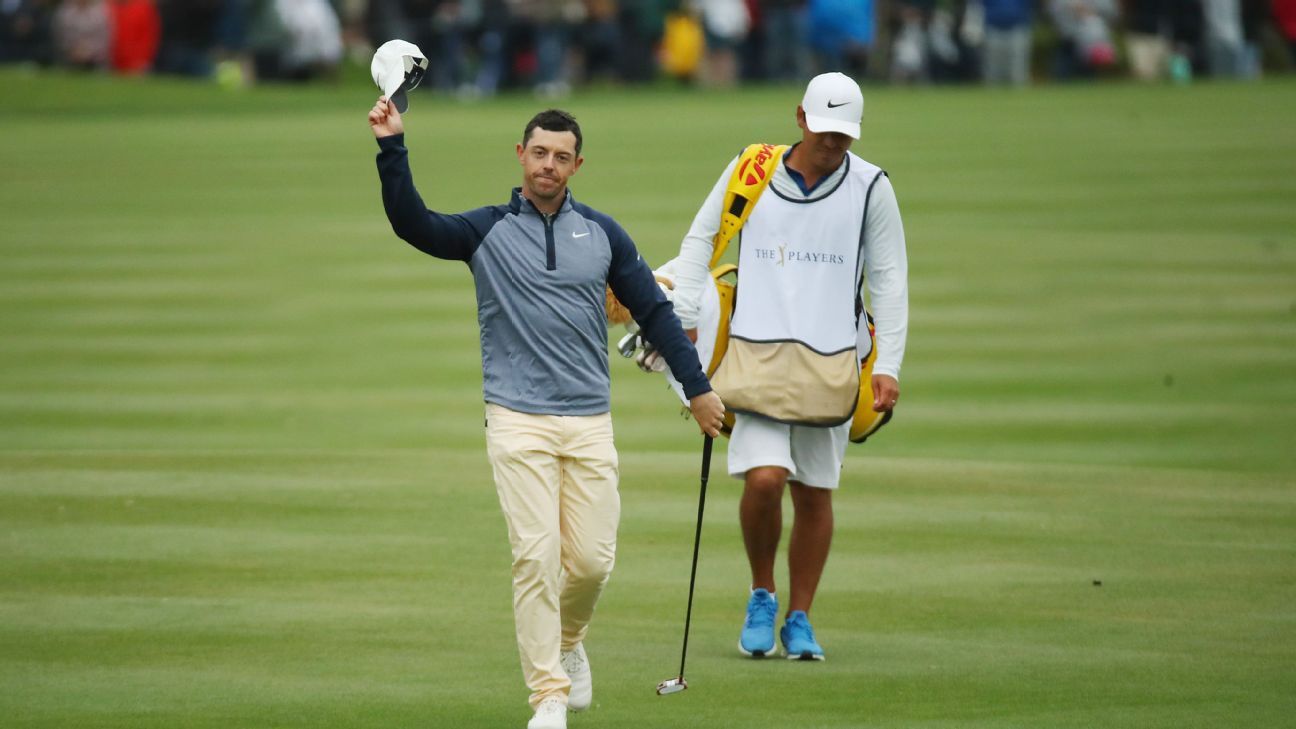 PONTE VEDRA BEACH, Fla. — The island green that never looks smaller than on Sunday at The Players proved to be no problem for Rory McIlroy. Same with the daunting tee shot at the 18th hole, the slew of players in contention and the windy conditions.

Perhaps most important, the recent history of trying but failing in golf tournaments across the world proved to be a product of patience rather than panic, as McIlroy notched a big victory on Sunday.

Starting the final round one shot back of leader Jon Rahm and overcoming an early double bogey, McIlroy played his last 10 holes in 4 under par on a raw day at TPC Sawgrass to claim his most important win since the 2014 PGA Championship.

It was his first victory in a year, since claiming the Arnold Palmer Invitational — which also happened to be on St. Patrick’s Day weekend.

“It’s not a bad weekend for me,” deadpanned McIlroy, who is from Northern Ireland.

“It’s very nice to get a win,” he said. “Especially doing it on this golf course, which played similar to the way Augusta will play. I’m playing some of the best golf of my life.”

Ah, Augusta. Good of Rory to bring up the home of Masters and the first major championship of the year, where next month he will be among the favorites to not only win the tournament but complete the career Grand Slam.

Such talk was inevitable, given McIlroy’s stature in the game and his run of high finishes in 2019, none of which has been worse than sixth. The nagging issue of playing in nine straight final groups without a win still persists — he was in the second-to-last group Sunday – but hardly matters now.

“I think all the experiences I’ve had over the last few weeks in terms of trying to win and not getting over the line definitely helped me [Sunday in the final round],” he said. “Maybe if I hadn’t have had those experiences, I wouldn’t be sitting up here with this trophy, so I’m thankful and grateful for those experiences I’ve had this year. Yes, it would have been nice to maybe get another win, but it sort of made it all worth it, the fact that this win has come at this golf tournament, a tournament where Sawgrass and I didn’t have the greatest relationship starting off.”

McIlroy missed the cut in his first three appearances. In 2011, he skipped the tournament altogether — a decision he later said he regretted — before posting three top-10s in the last five years prior to this victory.

But it was the run of near-success early this year that had many wondering if McIlroy had lost the closing spurt that brought him so much success early in his career.

Congrats to @McIlroyRory on a great win… silenced a lot of people today! Way to play bro 👊🏽

Although none of his final rounds were horrible — he shot 72 a week ago in the final round at Bay Hill — he still was coming up short.

“I really have left each tournament happy,” McIlroy said. “When you reflect on the week, you have to reflect on the 72 holes and not just the last two holes you played, and every time I reflected on the 72 I’ve played, I’ve been pretty happy. I’ve done everything I’ve wanted to do.

“I looked at my stats at the end of every week. I’m leading strokes gained tee to green, I’m putting well, my around the greens is good. Everything was in a really good place, and that’s why I was just preaching patience, and it was just a matter of time.”

Of course, McIlroy can’t control what other players do, and he had the likes of Xander Schauffele (Sentry Tournament of Champions), Dustin Johnson (WGC-Mexico) and Francesco Molinari (Arnold Palmer Invitational) putting up good final-day scores to win.

On Sunday, he had to contend with a flurry of competitors. Furyk, 48, who only got into the field last Sunday, fired a final-round 67 that included a kick-in birdie at the 18th.

Both Eddie Pepperell and Jonathan Vegas made monster putts — Vegas’ was measured at 70 feet, the longest every recorded — at the 17th hole to boost their chances. Johnson, Brandt Snedeker, Tommy Fleetwood and Rahm were all in the mix at some point.

But McIlroy bounced back from a bogey at the 14th to birdie the 15th. A 347-yard drive at the par-5 16th helped set up a two-putt birdie that gave him the lead for good. Then it was a matter of navigating two treacherous tee shots with water lurking at the 17th and 18th holes.

“The 18th was probably the most difficult shot I had all day knowing I had 4 to win,” said McIlroy, who pumped it 288 yards into the fairway.

That set up a two-putt par and his 15th PGA Tour victory, making him just the third player along with Jack Nicklaus and Tiger Woods to have a minimum of 15 wins including four major titles before the age of 30.

McIlroy has stayed true to himself over these last several months as victories eluded him.

And he chuckled at the journey, not just in terms of his life and his game, but just since playing his first Players Championship.

And Sunday’s victory might very well propel him a long way as he embarks on the next stage of his career.