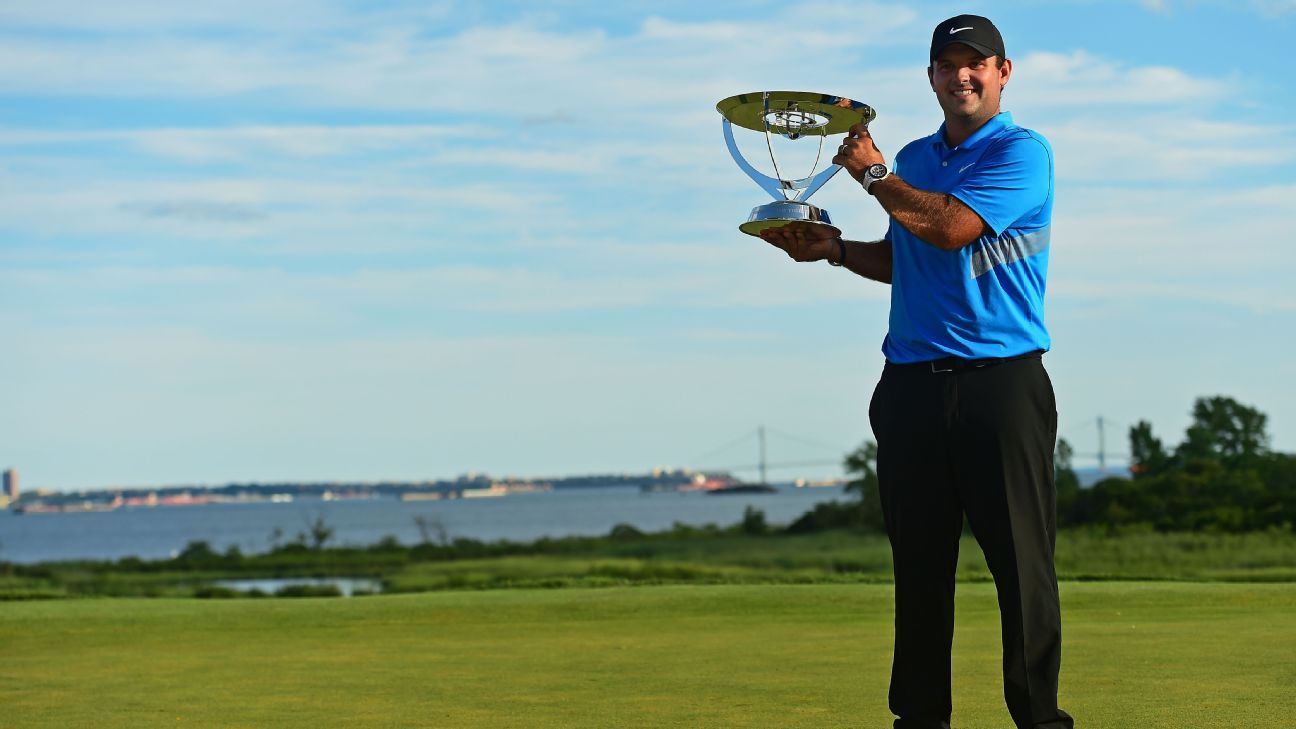 JERSEY CITY, N.J. — It was a quaint, throwaway line at the time, a backhanded compliment thrown Patrick Reed‘s way in the aftermath of his 2018 Masters victory, a first major title and a win solidifying his place among the game’s young elite players.

Tiger Woods, who had taken Reed under his wing when he served as an assistant at the 2016 Ryder Cup and 2017 Presidents Cup, tweeted his congratulations by saying, “At worst you have assured yourself a captain’s pick for next year’s Presidents Cup.”

For Woods, the 2019 U.S. Presidents Cup captain, it was a clever line directed at one of America’s best players who in no way would be in need of such charity this year. Or so it seemed.

Reed’s game fell off, and he found himself well outside the list of automatic qualifiers, so much so that he basically needed to win here and this coming weekend at Medinah to earn one of the eight automatic qualifying places.

He undoubtedly wanted to win the Northern Trust on Sunday for reasons beyond the team competition in December, namely because there had been no victories at all since Augusta National 16 months ago.

“It was more frustration and questioning going on because I felt like I was doing a lot of things really well,” said Reed, 29, who now has seven PGA Tour victories. “Felt like we were practicing the right way and playing golf on the golf course the right way and the numbers weren’t producing. It was just kind of wearing on you mentally.”

Think of all that has transpired since that last victory for Reed, who didn’t sniff a win the rest of the year, then became the central target for U.S. derision when he publicly slammed Jordan Spieth and U.S. Ryder Cup captain Jim Furyk for breaking up their successful pairing at previous competitions.

The U.S. suffered a lopsided defeat to Europe in Paris, and Reed had indirectly suggested that he wasn’t thrilled having Woods as his partner. Never mind that Reed mostly played lousy, and that Woods was coming off his emotional victory at the Tour Championship, his game also suffered, and he had served as a mentor to Reed.

But was he really criticizing Woods?

All parties suggested that this was smoothed over in time, but when Woods was asked about it last December, he simply said the two “spoke for a long period of time and we talked amongst us and it will stay between us.”

And as Reed slipped farther and farther down the list, did there exist a possibility that Woods would not pick him? Reed, in his 40th worldwide world rankings points event since the Masters, had posted just seven top-10s.

It’s a sub-plot that existed here at the Northern Trust and heading into this week’s BMW Championship, the final qualifying event for both the U.S. and International teams as well as the second of three FedEx Cup Playoff events. But it’s one made far more tenable now that Reed has won again — and posted his fourth top-12 finish in his last six events.

He moved from 17th in the Presidents Cup standings to 12th — one spot ahead of Woods — and would likely make the team with another victory at Medinah. Short of that, Reed would need to relay on an at-large selection from Woods, who won’t make his four captain’s picks until early November.

“It’s the same thing he always said, “Good golf takes care of itself. Go out and play well. Go out and play golf like you know how to play,”’ said Reed, who has moved to second in the FedEx Cup standings behind Brooks Koepka.

Part of his resurgence is due to a forced break he took following the PGA Championship, where he missed the cut in May. Already on Long Island, Reed took three weeks off and an unprecedented 10 days without picking up a club. Asked the last time he had done that, he said, “Probably 1990, the year I was born.”

The break gave him a spark.

“I came back and I’m hitting the ball farther, I have a clear picture on what I’m trying to do all of a sudden,” he said. “I come out and I start hitting the ball where it’s supposed to go. I’m starting to think clearly while I’m out there and numbers are starting to produce and the game starts turning around. I might have gotten into a situation where I was working too hard.”

Reed’s final-round 69 at Liberty National was good for a one-shot victory over Abraham Ancer and two shots ahead of Harold Varner and Jon Rahm, who had overtaken Reed earlier in the round.

Patrick Reed sinks a birdie putt on the 14th hole on his way to the win at The Northern Trust.

If that wasn’t enough, there are numerous opportunities to impress captain Woods following the FedEx Cup, including the PGA Tour’s three-tournament Asia swing that includes a stop in Japan, where Woods is scheduled to play. Reed is also scheduled to play several European Tour events.

“For me, it’s just continue playing good golf and that will all take care of itself,” Reed said. “If Tiger wants to call me, he knows I’ll always call him back. I’m not going to bug him. If I continue to go out there and play good golf, I know he’s going to make the right decision on picking four guys that he feels are best for the team at the end of the day.”

Wolfe wins in Bahamas for first Korn Ferry title
Ladies Euro Tour expands schedule, prize pool
Jason Day explains his back issues and why he can putt for only 30 minutes a day
European Tour’s new pace-of-play policy returns dividends at Abu Dhabi
The program that eliminates cheating and sandbagging at your golf course for good