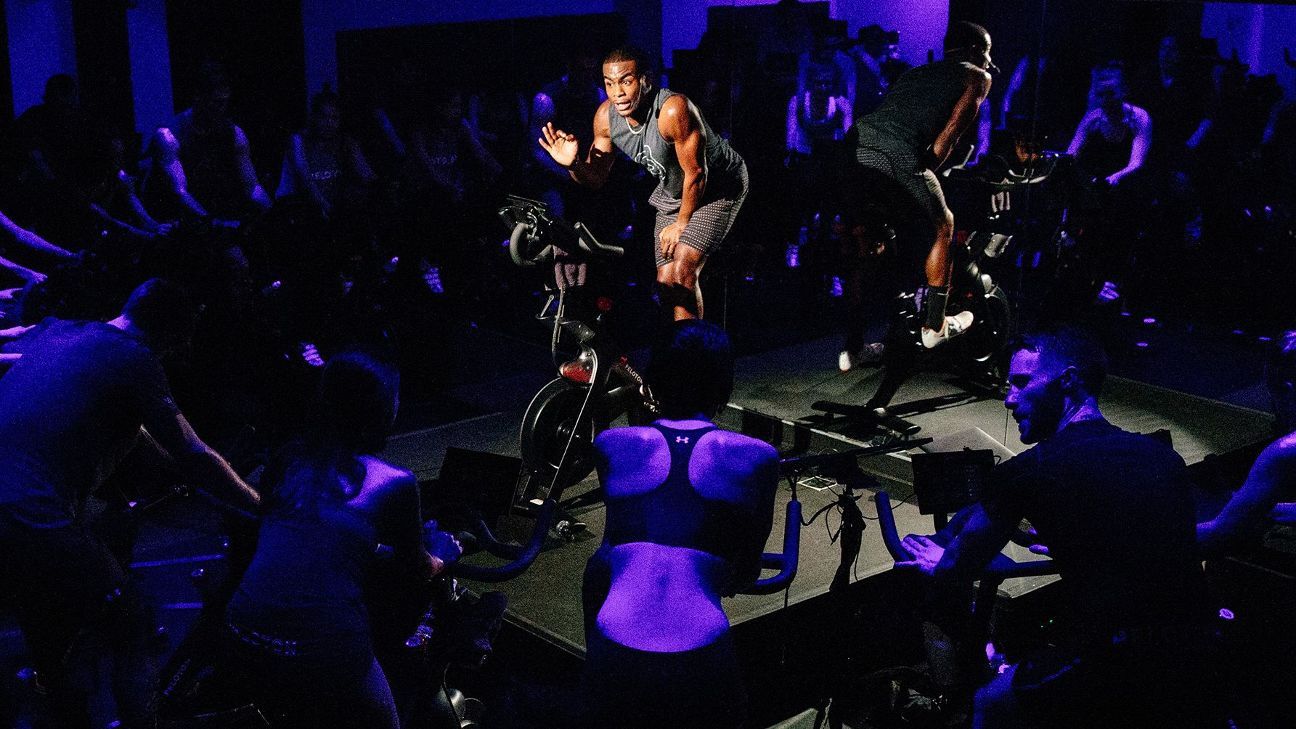 Admitting you own a Peloton bike is a lot like plastering a “26.2” sticker on your car. You get some approving nods, the way Volvo drivers wave at each other, and a whole lot of smirks that mock privilege, trend-chasing and passive swagger.

The guys in the office think it’s hysterical to send me promotional photos of the bike. This one is set up to face views of the Swiss Alps. That one is a screenshot from a failed advertising campaign. They assume I’m on a ride if a Slack message goes unanswered for five minutes.

These days, as we huddle inside during this most unsettling tragedy, it feels like the Peloton is less luxury and more survival, a piece of technology unintentionally suited for this moment. As the country grows accustomed to Zoom video conferences and Google Hangouts, an in-home spin bike connected to live and on-demand classes has never been more utilitarian. In a seemingly organic way, the Peloton experience has transformed into a virtual world where middle-aged sportswriters and stressed-out moms are now joined by elite pro athletes to exercise together in lockdown.

If social media is any guide, NFL players from the Chiefs’ Patrick Mahomes to the Browns’ Baker Mayfield to the Dolphins’ Adrian Colbert are among those who have flocked to the Peloton during a time when they are usually ramping up for the start of their teams’ offseason programs. Pro golfers such as Rory McIlroy, Justin Thomas and Bubba Watson have issued challenges to each other and invited fans to join them on rides. The Golden State Warriors are even taking group rides, according to the Wall Street Journal.

Calling ALL Dolfans & @onepeloton Atheltes around the world! Join me tomorrow at 1:30pm E for a 30min HIIT ride with @alextoussaint25 (from 3/21) Let’s stay active together while we practice social distance & help flatten this curve! 🚴🏾‍♂️🚴🏾‍♂️ @MiamiDolphins @NFL @thecheckdown pic.twitter.com/wcKY4DqXkM

More often than not, the stampede has led to Peloton instructor Alex Toussaint, a 27-year-old New York native who grew up in a military school and hosted former Carolina Panthers quarterback Cam Newton for an in-studio ride last summer. Toussaint’s classes frequently feature hip-hop music and revolve around a vibe he calls “Tough Love with AT.” His gravely, deep voice sounds a lot like some of the football coaches I’ve covered over the years and the drill sergeants I’ve seen portrayed in movies, and rat-a-tat instructions leave no confusion about class expectations.

“I’m providing an athlete workout. I call it the ‘this ain’t day care’ kind of energy. We’re not here to twiddle our thumbs. We have 30 minutes of opportunity, which means I have 30 minutes of motivation, and you can have 30 minutes of greatness. Let’s go get it. For you to be a pro athlete, you have to be of that mindset. Otherwise, you wouldn’t have made it to the pros.”

In cycling, the “peloton” is a group of riders who stay together and work as a team to achieve a larger goal. In business, Peloton has marketed itself as a way to build community through the shared convenience of virtual connection. In the quiet of these recent weeks, I’ve been thinking a lot about the distinction between hokey and hope, and the idea of a digital spinning community doesn’t seem so schmaltzy. The embrace of pro athletes who thrive on competition has caught my eye.

The in-home Peloton display includes a leaderboard of participants ranked by total output measured in kilojoules. But every instructor I’ve taken, Toussaint included, encourages riders to pay less attention to rankings and focus more on ways to pull the group, or be pulled, as necessary. That message seems especially relevant, and not at all trite, at a time when we’re being asked to recalibrate our daily lives to help others, if not ourselves.

“It’s amazing to have a competitive edge,” Toussaint said. “But at Peloton, the edge shouldn’t be, ‘I beat your score.’ It should be, ‘Hey, I pushed myself to push you.’ It’s a competitive edge that evolves together. You’ll see people at the top of the leaderboard, and they’re getting [personal records] or whatnot, but they’re not shunning the people at the bottom of the leaderboard. They’re out there giving encouragement and high-fives. We’re a family. We’re a unit. That’s what makes it special, the community aspect. Yes, you can be competitive and that plays a role, but the community is what brings it all together and makes it stick like glue.”

In our conversation, Toussaint dropped many of the lines that class regulars will recognize. He wanted us to “show up and show out” and be “a better version of themselves in every single way.” He asked riders to “subtract your doubt, add your courage and multiply your hustle.”

He relayed his journey to Peloton. Battling depression after leaving college, Toussaint lived on the floor of a friend’s house. He got a job mopping floors at a cycling studio in New York called Flywheel. One day, he asked if he could take a class. Another day, he was asked if he would like to teach. Now, in addition to his growing celebrity through Peloton, he works as a spokesman for Ladder, a sports nutrition company owned in part by NBA star LeBron James.

“That’s why I show up in every one of my rides in that Michael Jordan Game 7 approach,” he said, “because I know what it feels like to not have any sort of hope. And now I have all of the light, and I want to provide that to anybody that can possibly need it. That’s my No. 1 priority right now. It’s all I want to do.”

Challenge to all the @onepeloton riders out there! Ride with me and @JustinThomas34 this Friday @ 9am CT
w/ @alextoussaint25!! How about it @MichaelPhelps @McIlroyRory??#SocialConnection #StayActive #StayHome pic.twitter.com/9tHUv2ybnK

Not everyone is on board. “My butt always hurts after doing those rides,” Vikings tight end Kyle Rudolph said last week. Instead, Rudolph uses an Arc machine for cardio and recently ordered a Tonal for strength work.

No matter. These days, we’ll take the light wherever we can find it.