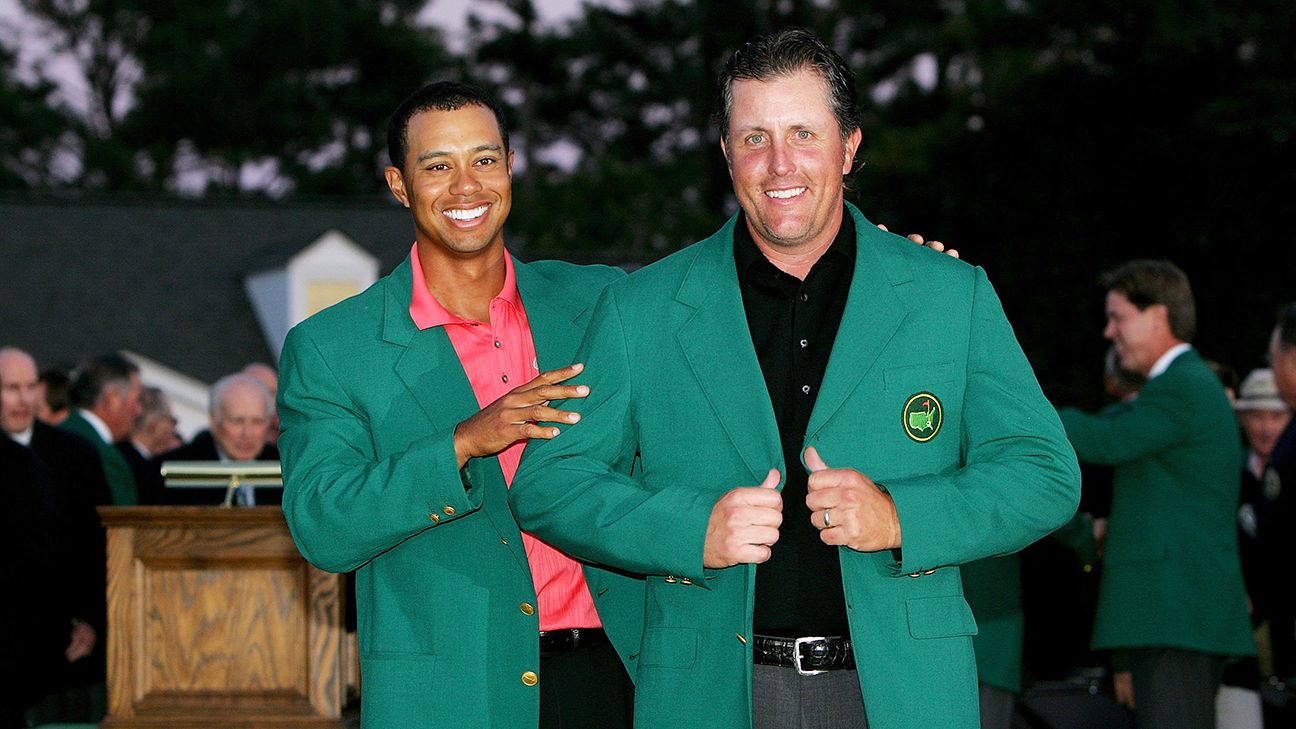 Hal Sutton must be shaking his head. The long-ago U.S. Ryder Cup captain once, in 2004, tried to make Tiger Woods and Phil Mickelson partners, with disastrous results that lingered for years.

And far more recently, this union still would have been all but impossible to envision.

Now, for the second time, they have joined forces for a made-for-TV/streaming event that will undoubtedly attract a slew of eyeballs in a world that is still largely without sports.

The Match: Champions for Charity will take place Sunday at 3 p.m. ET at the Medalist in Hobe Sound, Florida, and also includes NFL legends Peyton Manning and Tom Brady. It is the second iteration of a partnership that began in 2018 when Woods and Mickelson had a Thanksgiving encounter in Las Vegas, with Lefty prevailing in four extra holes to win $9 million.

Now it’s all for charity — although the idea of such a match was in the works well before COVID-19 altered sports across the world.

How did we get here?

As recently as the 2013 Open at Muirfield, the frostiness was all but apparent. When Mickelson captured what likely was his finest victory — an Open win that saw him come from behind by shooting 66 for his fifth major title — Woods was in no mood to give any props.

Woods was in contention that day, too, and couldn’t get what then was another elusive major title. That Mickelson blew by him to snag the Claret Jug was understandably frustrating but came with little in the way of appreciation, Woods noting only that “the course was gettable” and failing to acknowledge one of golf’s greatest triumphs.

At that time, it would have been impossible to envision Phil driving across the freeway in San Diego to meet Tiger for a charity match. Now he’s flying to South Florida to do so?

Nobody ever said they needed to be friends. Or even friendly. Both were striving for the same things, and Woods, 44, became known as someone who was not going to let his rivals get too close. Mickelson, 49, always played nice, often complimenting Woods for what he meant to the game in general and his competitive influence on Phil in particular.

Although Mickelson had a five-year head start as a pro and had won nine times on the PGA Tour by the time Tiger arrived in 1996, it didn’t take long for the younger phenom to catch up.

And, of course, there was that matter of Woods rattling off eight major championships while Mickelson was stuck on zero.

Grudgingly, there was acceptance from Woods, although he never let on much publicly, always trying to keep that edge.

But as Woods’ injury woes mounted, his own mood and temperament softened. And after taking on a role alongside Mickelson in 2014 as part of the U.S. Ryder Cup effort, he later became a vice captain in 2016 when he missed the entire year because of back problems.

“Our relationship turned around 2016 when we were working together for the Ryder Cup,” Mickelson said recently on the Dan Patrick radio show. “He was an assistant captain. We spent a lot of time on the phone. When we worked together for a common goal, it brought us closer.”

It took until the 2018 Masters for the two golf legends to play a practice round together — some 20 years after they had last done so. And then they were grouped together for the first two rounds of the Players Championship, another rarity.

Justin Thomas tells Scott Van Pelt that he plans to talk as much trash as possible to both Tiger Woods and Phil Mickelson at their charity golf event, where Thomas will be working as a broadcaster.

And Woods noted that he appreciated Mickelson reaching out when he was down.

“When I was trying to deal with the nerve [pain] in my back, trying to come back and trying to play and I wasn’t very good, he always texted me some very encouraging words,” Woods said. “On top of that, when you guys all saw how I was chipping so poorly [in 2015], my nerve and my back was not doing very good and I was flinching a lot, he offered numerous times to help. He’s one hell of a competitor and it’s always a challenge to try to beat him.”

Some of their conciliatory words were no doubt due in part to the plan that was being formulated behind the scenes, one that would see them take part in the big-money, pay-per-view match in Las Vegas. That was never expected to be a one-off, hence this week’s charity match in Florida.

Woods is going to partner with Manning and Mickelson takes Brady in a match that will entail nine holes of best ball followed by nine holes of modified alternate shot.

The four players, along with Warner Media, have pledged $10 million to COVID-19 relief efforts, and all four are taking part in the ALL IN Challenge in which they offer a personal experience for auction to raise more money.

Along the way, this will be an opportunity for Manning and Brady to show off their skills in another sport, while Woods and Mickelson can give us a hint as to the states of their games after all this time away.

The winner, in this case, doesn’t matter, but there are some bragging rights at stake, as Mickelson continues to remind Woods.

“Just a very special day and something I’ll always be appreciative of the opportunity, appreciative of the 25-plus-year career that I’ve had, appreciative of what [Woods has done] to propel the sport from where it was when I started to where it is now,” Mickelson said after winning that Las Vegas match. “And it doesn’t take anything away from the career and everything you’ve accomplished. Just gives me just a little bit something extra to bring up the next time I see you.”

And when Mickelson did just that in a Zoom call recently to promote this event, Woods … had his green jacket for winning the 2019 Masters nearby to push it right back.

But Mickelson came back for more.

“I can’t wait to go to Tiger’s place and take him down,” Mickelson told Golfweek. “Tiger thinks he has a huge advantage playing there because he was insistent that this event is played on his home course. Despite everyone else wanting to play it elsewhere. That’s fine. We’ll take it to him and Peyton.

During an announcement for “The Match: Champions for Charity,” Peyton Manning trolls Tom Brady about his breaking and entering incident and his departure from New England.

“There will be no excuses. It’s his home course but Tom and I are going to go down there and put it to them, and we’ll make it that every time Tiger shows up at his home course, he’ll have a bad memory.”

Laughs and smiles all around.

Who would have thought?

Sunday’s match will raise millions of dollars for charity and give us a much-needed live sporting event to watch.

And rest assured, when the coronavirus pandemic has passed, Tiger and Phil will be there again to put forth another event, in some shape or form.